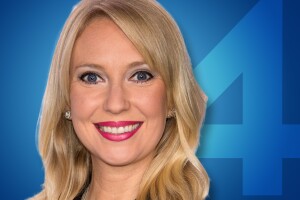 Kristen Kirchhaine joined Storm Team 4 in April of 2020. You can watch her forecasts weekend mornings on TMJ4 News Today and throughout the week.

Kristen grew up just across the lake in western Michigan. From there she moved to Arkansas and attended college at the University of Arkansas in Little Rock. Kristen graduated with a Bachelors degree in Broadcast Journalism. After an internship in radio and then television weather forecasting, Kristen decided to pursue a career in meteorology. She went on to continue her education through the Broadcast Meteorology Program at Mississippi State University. She completed her Broadcast Meteorology certification and also completed a second Bachelors degree in Geosciences through Mississippi State University.

Kristen's meteorology and broadcast career has taken her all over the country. Prior to TMJ4, Kristen worked as a fill-in meteorologist at WMAQ in Chicago, while working full time as a video and social media producer for a not-for-profit company.

During this time, Kristen heard the call to return back to forecasting full time. She could not be more thrilled for the opportunity to forecast the wild weather of Southeast Wisconsin.

Kristen also worked for three years as a meteorologist at WBBH in Fort Myers, Florida. During her time there, she enjoyed tracking afternoon thunderstorms and tropical weather. Kristen had the chance to fly with the Hurricane Hunters during the development of Hurricane Hermine in 2016. In 2017, Kristen worked alongside her colleagues tracking Hurricane Irma along its route to landfall in Southwest Florida.

Earlier in her career, Kristen served as the Chief Meteorologist at WFFT in Fort Wayne, Indiana, and before that as Chief Forecaster at KULR in Billings Montana.

Outside of work, Kristen enjoys spending time with her husband, Brad, and their two cats, Meesa and Friday. She also likes to travel, read, exercise, volunteer, and try out new vegetarian recipes. When the weather is warm, Kristen loves to garden, play golf, and spend time outdoors.