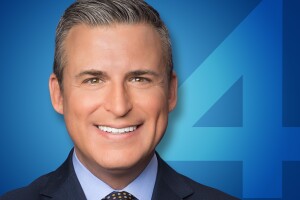 He started his broadcasting career in 1994 as a newsroom intern, then stuck around as an overnight newscaster on 620 WTMJ and as a television field producer.

All these years later, Steve anchors "TMJ4 News at 5" and "TMJ4 News at 10" with Carole Meekins and Shannon Sims. He also hosts "The Now Milwaukee."

"It's no exaggeration to say this is a dream job," Steve said. "This is a special place and I am honored to be a part of an amazing legacy."

Since returning to TMJ4 in 2011, Steve has lead the way as a member of the I-TEAM.

In 2016, he was awarded an Edward R. Murrow award for his news documentary “Making the Milwaukee,” a series that tracked the building of the U.S.S. Milwaukee.

Steve’s reporting in 2014 exposed local school districts failing to do the required number of safety drills each year. These schools were forced to change their safety drill policies after being caught violating state law.

And in 2011, Steve's I-TEAM reporting exposed problems with illegal day cares, including dangerous practices that contributed to the deaths of children. This prompted hearings by a state senate committee, which is considering legislation to help keep children safe in day care.

A 1998 graduate of Marquette University, Steve is a big fan of Golden Eagles basketball. In the warmer months, he enjoys watching Brewers baseball - preferably on a night when the roof is open. He and his wife live in Whitefish Bay.

Before returning to Milwaukee, Steve worked as a reporter for WFLD-TV in his hometown of Chicago. He led the investigative reporting teams at KMOV-TV in St. Louis and KCTV-TV in Kansas City. He also reported for television stations in Madison and San Francisco.

Steve's work has been featured on the CBS Evening News, 60 Minutes and Court TV. It has resulted in new state laws, reforms to the court system, the clean-up of illegal dumps, criminal investigations and the resignations of powerful public servants.

His reporting has been honored with some of the industry's highest awards including a National Headliner Award for Investigative Reporting. Steve was a finalist for the Investigative Reporters and Editors Award, won ten regional Edward R. Murrow Awards, nine Mid-America Emmy Awards, three Missouri Broadcasters Awards, the Kansas Broadcasters Award and numerous awards from the Kansas City Press Club.

If you have a story, Steve can be reached at Steve.Chamraz@tmj4.com