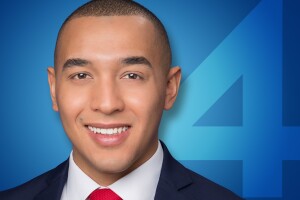 Ryan Jenkins wakes up early to report for TMJ4 News Today. He joined the team in January 2020.

Ryan is new to Wisconsin, but not the midwest; he was born in Elgin, Illinois. He comes to TMJ4 after spending time in the Illinois/Iowa "Quad Cities" as a Multimedia Journalist and Fill-In Anchor at WQAD-TV. He covered the historic flood of 2019, the race leading up to the 2020 presidential election, and the 2018 gubernatorial race in Illinois.

Prior to being on-air, Ryan was a video editor and served as a digital content producer. He graduated from Augustana College in 2018 with a Bachelor’s Degree in Multimedia Journalism and Mass Communications.

As the Editor-In-Chief of the Augustana Observer Newspaper in 2016, he was in Washington D.C. to report on the inauguration of President Donald Trump, and the concurrent Women’s March on Washington.

In college, Ryan interned at "CBS This Morning" in New York City. He worked alongside journalists who were covering hurricanes Harvey and Maria, and the 2017 Las Vegas Shooting.

Passionate about storytelling across multiple platforms, Ryan’s love for news stems from a desire to better understand and connect with the people in the community around him. If you have a story you think Ryan can help share, contact him at Ryan.Jenkins@TMJ4.com