Democratic National Convention postponed until August due to coronavirus pandemic 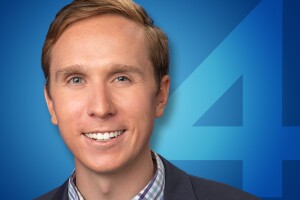 James Groh is excited to work at TMJ4. He joined the station as a digital multimedia journalist in May 2019.

Before coming to Milwaukee, he worked in Buffalo as a general assignment reporter. James is the first digital MMJ at the station. James focuses on creating fun, different, and engaging stories that you might not find in a typical newscast.

James is from San Francisco but is very familiar with Milwaukee. His dad grew up in Elm Grove, and he has visited his cousins and aunts that live here many times.

He graduated from the S.I. Newhouse School of Public Communications at Syracuse University with a degree in Broadcast and Digital Journalism.

James is an avid “board sports” fan. He likes to paddle, wake, skate, and snowboard. He also does improv comedy at Comedy Sportz (come see a show... it’s hilarious) He also plays guitar and taught himself piano.

One of the best parts of journalism for James is that he can see something new everyday and interacts with amazing people. If you think you have a story idea, please reach out to him on Facebook or Twitter. You can also email him at James.groh@tmj4.com.