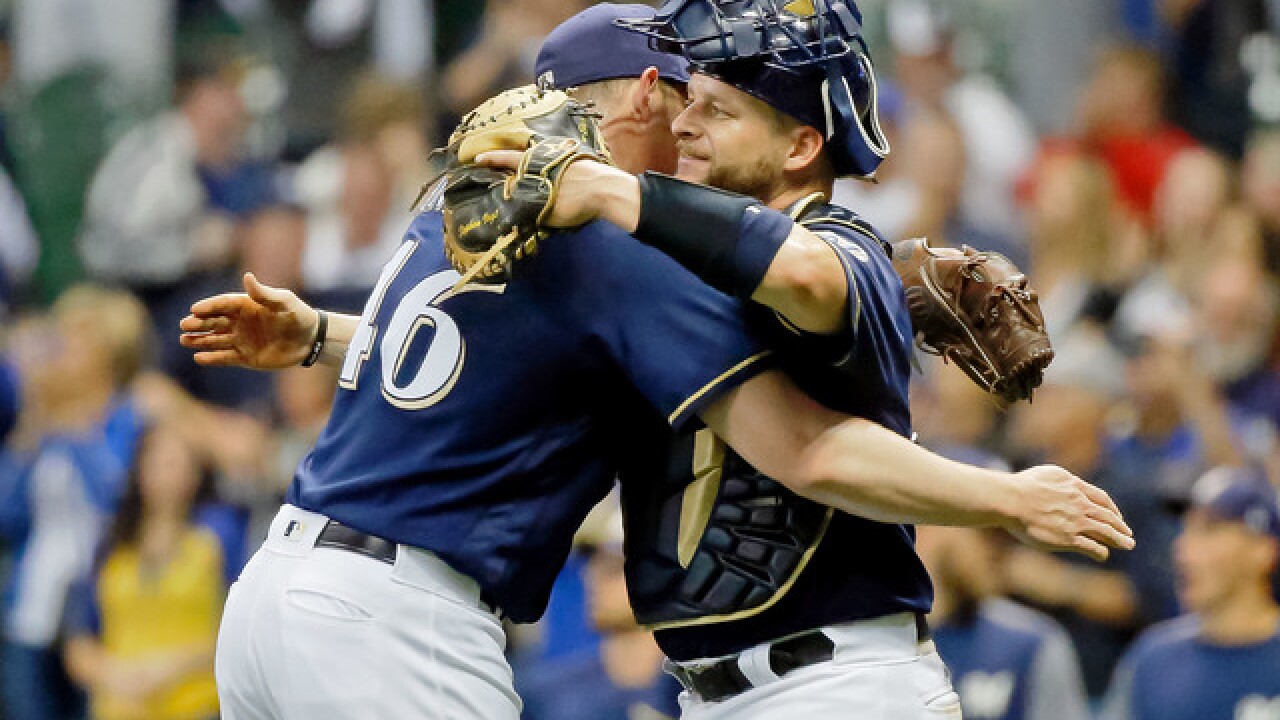 Copyright 2018 Scripps Media, Inc. All rights reserved. This material may not be published, broadcast, rewritten, or redistributed.
Jon Durr
MILWAUKEE, WI - AUGUST 31: Corey Knebel #46 of the Milwaukee Brewers (L) and Stephen Vogt #12 (R) hug after their win over the Washington Nationals at Miller Park on August 31, 2017 in Milwaukee, Wisconsin. The Milwaukee Brewers won 6-3. (Photo by Jon Durr/Getty Images)

Thanks to four extra off days in the 2018 MLB schedule, an unprecedented Sunday off-day gave the Brewers players and families an opportunity to celebrate Easter together.

According to MLB.com's Adam McCalvy, the Brewers gathered at Miller Park for an Easter dinner following their return from a three-game sweep over the San Diego Padres to start the season.

"It was definitely a big-league representation of how the Milwaukee Brewers take care of families," Brewers opening day starter Chase Anderson told McCalvy. "I think that’s one of the coolest things about our organization.”

Outside of the dinner, the club also head a big Easter egg hunt for the families.

More than just dinner and family time, all of this accomplishes a bigger goal: building comradery around a club dealing with the pressure of high expectations and the grind of playing through an MLB season.

It's the same reason the Brewers put together their now famous Sandlot video.

"Sometimes you’ll be winning eight straight games, and sometimes, unfortunately, you’ll go through the four, five game losing streaks," Jacob Barnes told Fox during Spring Training. "If you kind of keep that fun atmosphere and not dwell on the negative stuff, keep it loose in the clubhouse, it goes a long way.”

But togetherness isn't limited to the team on field, the organization's goal in 2018 is a build a community around the Brewers throughout the state of Wisconsin.

On their first road trip, they announced they'd be carrying a Brewers flag with every city in the state of Wisconsin printed on it on every road trip to carry Wisconsin with them wherever they go.

Another idea surrounding this team is an Us vs. the World mentality.

In their Opening Day hype video, Eric Thames spoke over gritty, grey shots of Milwaukee saying, "Write us off, pass us over, tell us everything we're not."

Also, they've had more than a few Twitter wars with the Cubs and Cub fans over tickets to games at Miller Park.

It's clear what the Brewers are going for in 2018. In the current MLB climate of glitz and glamour from the big bats of New York, Los Angeles and Chicago, the Brewers are holding onto a tight-knit, community-based feel that they hope can propel them to the playoffs.