Brewers first baseman had an up-and-down 2017 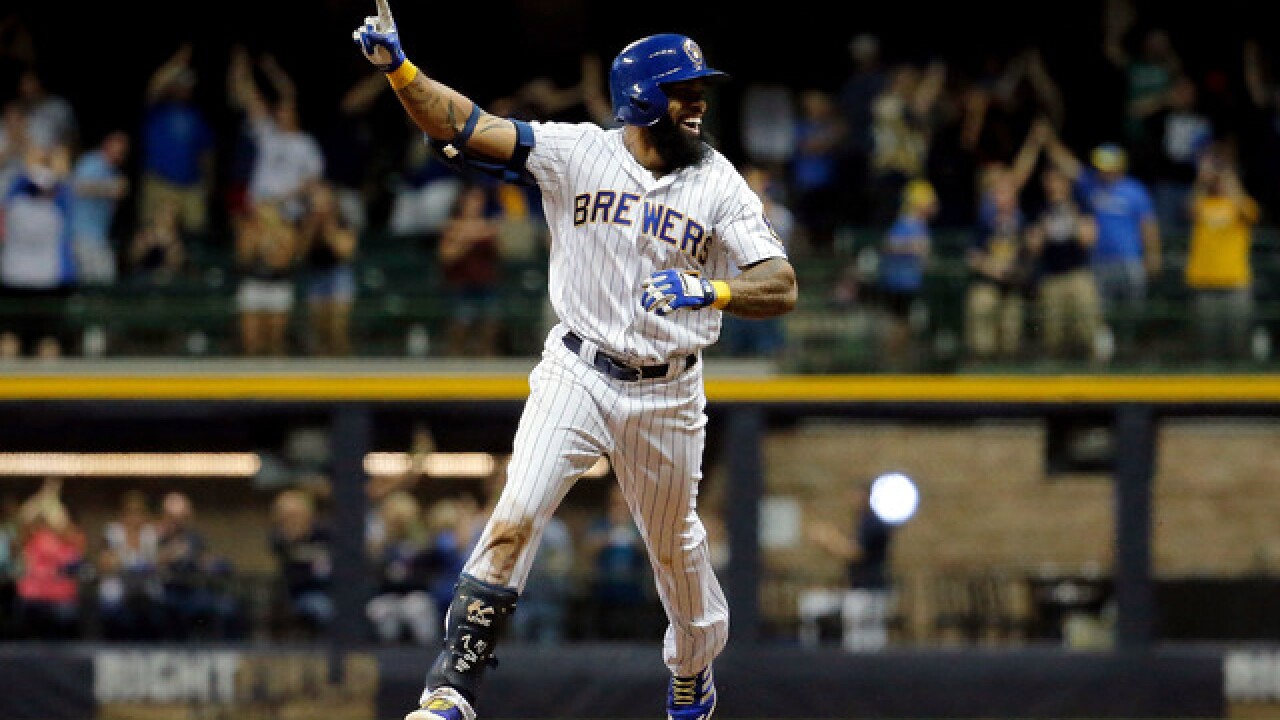 Copyright 2018 Scripps Media, Inc. All rights reserved. This material may not be published, broadcast, rewritten, or redistributed.
Jon Durr
MILWAUKEE, WI - JUNE 16: Eric Thames #7 of the Milwaukee Brewers celebrates after hitting a walkoff home run against the San Diego Padres during the tenth inning at Miller Park on June 16, 2017 in Milwaukee, Wisconsin. The Milwaukee Brewers won 6-5 in ten innings. (Photo by Jon Durr/Getty Images)

In his triumphant return to Major League Baseball for the first time since 2012, Brewers' first baseman Eric Thames turned heads and dropped jaws after he ended the month of April hitting a Ruthian .345 with a 1.276 OPS and 11 home runs.

Unfortunately for Thames, his April showering of home runs didn't flower into that same level of success in May. From May through August, the big-bearded, muscle-bound lefty hit a lowly .207 with a .749 OPS and 17 home runs.

He bookend his season nicely, finishing with a .328 average and 1.004 OPS over his final 22 games, and his final season stats heavily benefited from his hot start and finish.

Thames ended the year with a respectable .247 average, .877 OPS and 31 home runs over the campaign.

Heading into 2018, Thames is an enigma. It's hard to know what to expect from a player who was bounced from MLB in 2012 after faltering with the Blue Jays and Mariners, earned an MVP in the Korean League, then produced a season of outrageous ups and downs.

Right now, baseball reference projects Thames to finish 2018 with a .246/.347/.490 slash line, 24 home runs and 55 RBI. Fangraphs and Baseball Prospectus project around the same. The consensus seems to be somewhere between a .240 and .250 average with about 25 home runs.

In order to examine Thames this year, let's look back at last year to see where he flourished and where he faltered.

First off, Thames was miserable against left-handed pitching. In 110 plate appearances, he managed a .182 average and struck out 41 times.

Another situation Thames struggled with in 2018 was hitting with runners in scoring position (RISP). In 127 Plate appearances with RISP, Thames hit .180 and struck out 36 times. He only came through with RISP 18 times all season.

Thames had even worse results with RISP and two outs. In 64 plate appearances, he had 6 hits, struck out 21 times, and managed an average of .118.

Getting into specifics, Brooks Baseball provides pitch-by-pitch results for each hitter and pitcher over the course of their careers.

Thames faced 307 change-ups last season. He swung at 166 and whiffed on 36 percent of those swings. Overall, he hit .210 against change-ups, the lowest against any pitch he faced all season, even breaking pitches.

Pitchers definitely figured this out.

In three of the final 5 months, Thames faced at least 15 percent off-speed and under 58 percent hard.

But like all baseball strategies, it isn't as simple as pounding Thames with the change-up.

With Thames already off balance, pitchers pounded him with fastballs in change-up counts and had him whiffing on fastballs 26 percent of the time.

He wasn't much better in terms of sliders. He hit .216 against right handed sliders and whiffed 34 percent of the time.

Though Thames whiffed quite a bit on fastballs, he did show relative offensive success against them. He hit .292 against four seam fastballs, .308 against sinking fastballs, and .280 against cutting fastballs. 13 of his home runs and 14 of his doubles came against the hard stuff.

The challenge for Thames in 2018 will be getting into favorable, obvious fastball counts and staying out of two strike counts.

So, if Thames can attack and get ahead in counts and learn to adjust to off-speed in 2018, he could have another productive season at the plate. But if he starts falling behind is forced to battle pitchers best breaking stuff, he could find himself in a similar situation to 2012.