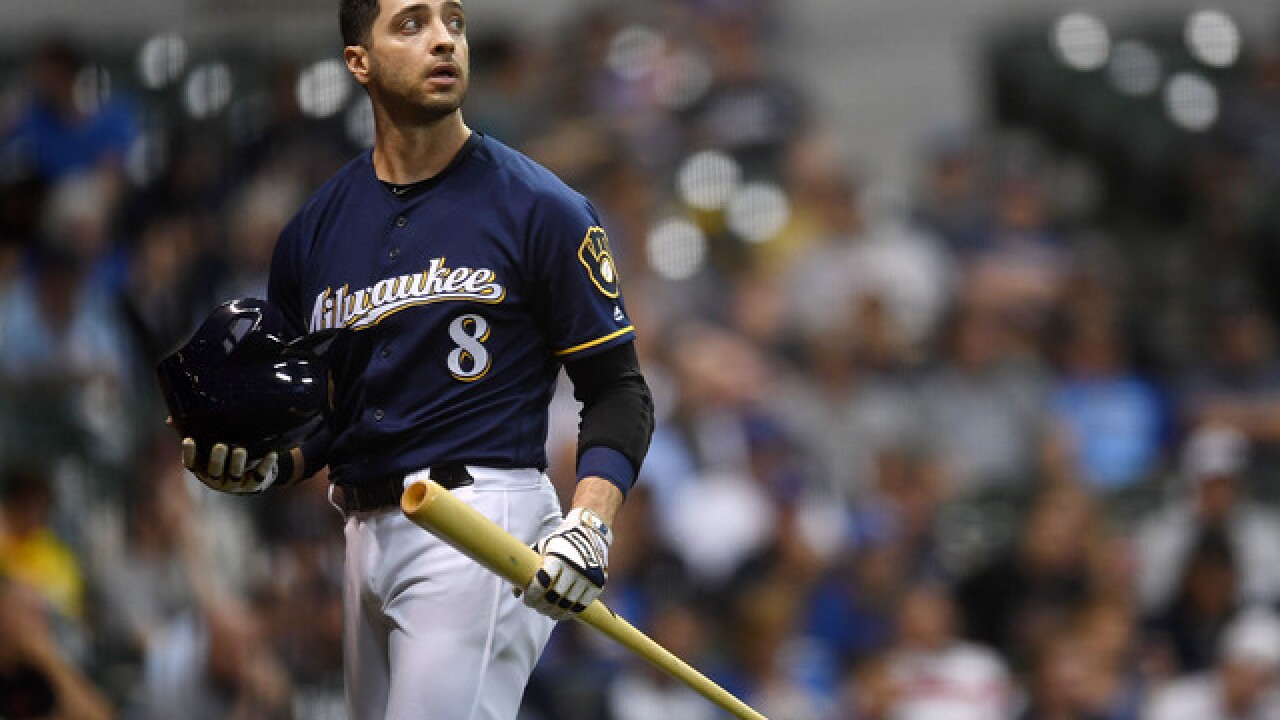 Copyright Getty Images
Stacy Revere
<p>MILWAUKEE, WI - SEPTEMBER 26: Ryan Braun #8 of the Milwaukee Brewers reacts to a strike out during the first inning against the Cincinnati Reds at Miller Park on September 26, 2017 in Milwaukee, Wisconsin. (Photo by Stacy Revere/Getty Images)</p>

Ryan Braun will start the season at first base.

The 34-year-old Braun has been planning to platoon at first base all offseason, taking plenty of ground balls to get comfortable with the position, but it will still be a big adjustment for the veteran who last logged innings in the infield as a 23-year-old rookie.

Braun has never been exceptional in the field. His defensive Wins Above Replacement (WAR) has never been better than 0.3, and he posted that when he was 26.

Last season, his Fielding Runs Above Average (FRAA) was a -4.0, which ranked 172nd among the 236 fielders with at least 350 plate appearances.

And that was in Left Field, a position considered the second easiest in the major leagues.

Now, Braun will have to return to the infield, a place he made 26 errors as a rookie.

Twenty-six is certainly a glaring figure, but what most overlook when they see that stat is the nature of the errors he was committing.

Combing through box scores, 15 of those 26 errors came off of bad throws.

Playing first base should eliminate some of those errors, and in all actuality, Braun should be a better defender this season simply due to the nature of the position.

Though the infield may seem more intimidating, per Fangraphs.com's defensive metrics, first base grades as the easiest fielding position to play by far.

It's also part of the Brewers' process of finding out what to do with an aging, expensive Ryan Braun.

He's fresh off one of the worst seasons of his career in 2017. Through various injuries, he hit .268 with a .823 On-Base Plus Slugging. The only season he performed worse was 2014, the season his reputation was still recovering from being suspended without pay for the remainder of 2013 due to suspicion of PED use.

Braun bounced back admirably in 2015, bringing home his sixth all-star nomination, but bouncing back in 2018, as a 34-year-old, will be much harder.

Granted, Braun is supposed to be completely healthy in 2018. At least, as healthy as an 11-year veteran can be. And when he was healthy last season, he was a quality, productive member of the lineup.

After returning from his second DL stint of the season, which lasted 31 days, he settled in and hit .274 over 237 at-bats over the second half of the season.

But this season, for the first time in his entire career, the Brewers don't need Braun's presence to have success on offense.

With the additions of Lorenzo Cain and Christian Yelich plus the presence of Travis Shaw, Eric Thames, Domingo Santana and Maverick Phillips and Keon Broxton waiting in the wings down in AAA, the Brewers have more offensive depth than they know what to do with.

And in 2018, Brewers fans might see a more part-time Ryan Braun. Last season, he was given a season low 380 at-bats, and this summer, it's no longer a guarantee to come to Miller Park on Sunday afternoon and see number 8 in the starting lineup.

However, it appears Braun will embrace his role in 2018, whatever it may be.

“As I said from the beginning, I don’t have any unrealistic expectation of being perfect or expecting to feel like I’ve been there my whole career," Braun told the Milwaukee Journal Sentinel regarding his switch to first base. "So, I’m just going to do the best I can, continue to learn, continue to get better.”