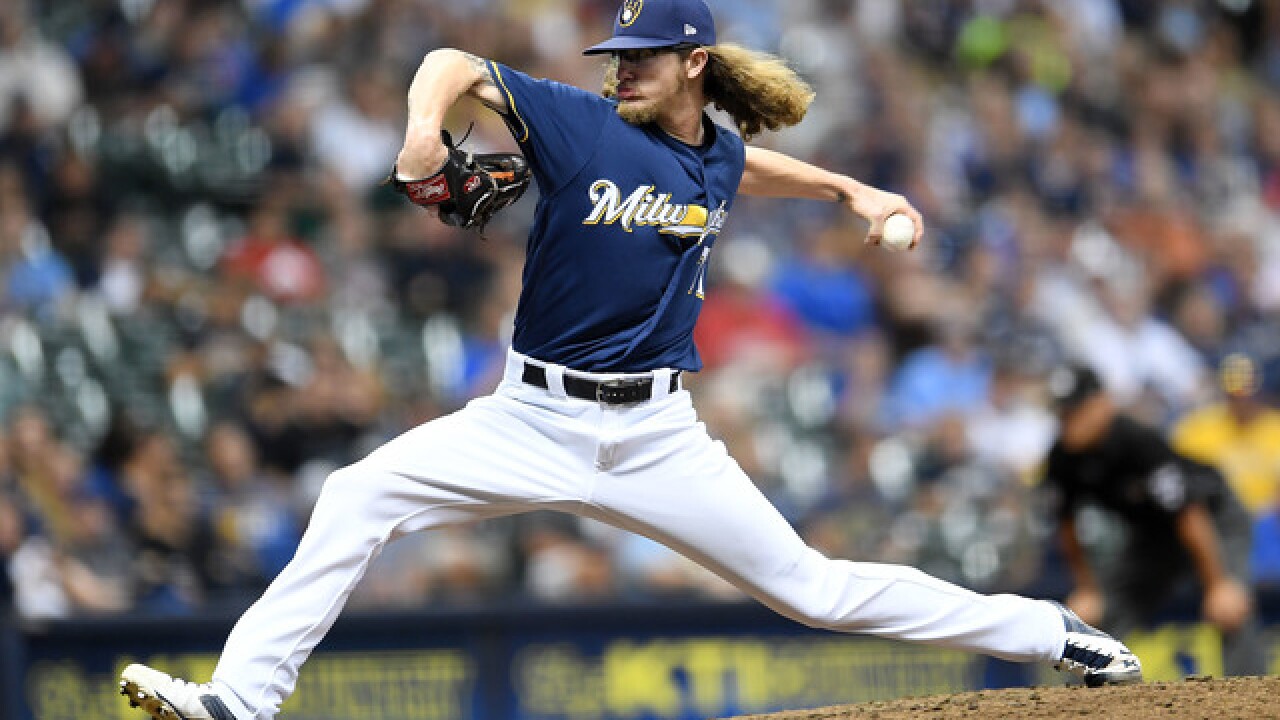 Copyright 2018 Scripps Media, Inc. All rights reserved. This material may not be published, broadcast, rewritten, or redistributed.
Stacy Revere
MILWAUKEE, WI - SEPTEMBER 26: Josh Hader #71 of the Milwaukee Brewers throws a pitch during the fifth inning of a game against the Cincinnati Reds at Miller Park on September 26, 2017 in Milwaukee, Wisconsin. (Photo by Stacy Revere/Getty Images)

The 2018 Milwaukee Brewers are a young, upstart bunch attempting to build on the successes of last year's 86-76 season and compete in a top-heavy National League Central Division strong-armed by the Chicago Cubs. Plenty of players will have to step up this season, but here are five Brewers to watch heading into opening day:

The 25-year-old outfielder was an expensive get for the Brewers this offseason, and fans are expecting to receive a big reward for sacrificing top prospects Lewis Brinson and Isan Diaz.

In 2016, Yelich had the best season of his career by far. He hit .298 with an .859 On-Base Plus Slugging which earned him a Silver Slugger and a 19th place finish in the MVP voting.

His average dropped to .282, his OPS dropped 52 points to a 807, and his defensive WAR was negative across the board.

Among 235 fielders with at least 350 plate appearances, Yelich ranked 233rd in Baseball Prospectus' Fielding Runs Above Average (FRAA). His overall score was -17.2. It was a far fall from the -5 he posted in 2016.

If some fans don't like that statistic, baseball reference's defense Wins Above Replacement (dWAR) rated 2017 as his worst career fielding season. Yelich amassed a -0.3 War, 0.5 points worst than 2016.

Yelich is on a five-year, team-friendly contract and is firmly under club control until 2022 on a bargain rate, but the 2018 season will be big in terms of Yelich proving himself to his new ball club and new city.

Until now, Yelich has always played second or third fiddle behind Giancarlo Stanton and Marcell Ozuna, but now, he's expected to be a major face in an up-and-coming franchise. It will be interesting to see if he steps up and plays like it.

With his long locks and slender build, the 23-year-old lefty is expected to be a jack-of-all-trades bullpen arm in the mold of the Cleveland Indian's Andrew Miller.

And While Hader looked exception in Spring Training, allowing 0 runs and 3 hits over his first 8 innings, there will be a lot of pressure and responsibility on him to step up and perform in high leverage situations in 2018.

But Hader has never been a victim of pressure. Last season, he pitched in 57 high leverage situations, and he was exceptional in that sample allowing just 9 hits, 5 extra base hits, a .570 OPS, and striking out 18.

Any questions regarding Hader's quality and ability to stay up at the major league level have been thrown out the window. It's clear he's up for good.

The question is whether the Brewers will give him a look in the starting rotation.

When the Brewers acquired Hader in the Carlos Gomez trade, the organization wanted him to be a starter, but it didn't work on in AAA last season. Over 12 starts, he carried a 5.54 ERA and had a woeful 1.54 WHIP.

If the Brewers have a clear hole in 2018, it lies within the starting rotation. With Chase Anderson listed as the opening day ace and Jhoulys Chacin pitching every fifth day, it isn't a desirable bunch. Potentially, some starts from Hader could give the group the jolt it needs.

However, another question is whether a pitcher is more valuable pitching every fifth day or if calling on him to perform in high leverage situations provides a larger benefit. Old school managers would argue the former, but new age baseball might suggest the latter.

Cain triumphantly returned to Milwaukee this winter after he signed a five-year, 80 million dollar deal right before Brewers On Deck, and he's been a portrait of consistency throughout his last four seasons with the Kansas City Royals.

Heading into 2018, he provides a well above-average glove in center field as well as a burst of speed and power.

However, the question is how long can the veteran, who turns 32 shortly after the start of the season, maintain that trademark consistency without experiencing a drop-off in production.

Last year, Cain experienced the heaviest workload of his career, playing in 155 games and getting 584 at-bats.

Cain has battled through injuries multiple times throughout his career, most notably in 2016, and a key for him will be staying healthy and in the lineup.

Rumors on Nelson's potential return date from surgery following a strained right rotator cuff have been as early as May and as late as mid-July. Right now, nobody knows when the 28-year-old, soft-spoken Texan will return to the rotation, but Nelson's health will a key for this team during the dog days of summer.

Last season, the University of Alabama graduate finished 9th in the Cy Young voting with a 3.49 ERA and 3.05 FIP. He struck out 199 batters on a devastating slider and walked a career-low 48 hitters a season after he surrendered a league-high 86 free passes the year prior.

With a starting staff that lacks a true ace, Nelson can be the in-house answer Brewers fans are looking for.

The Brewers have an incredibly abundant wealth of outfield talent. Right now, players that would be in The Show with a majority of MLB clubs, Keon Broxton and Maverick Phillips, are instead biding their time in AAA awaiting a call-up.

If the Brewers made it through the July trade deadline without dealing at least some of their depth to acquire more pitching -- whether it's a starter or bullpen arm -- it would be shocking.

Brewers GM David Stearns has already shown the ability and ambition to make big splashes on the trade market, and even better, he's shown the ability to demonstrate restraint on a player outside of the Brewers price range.

Whether it's Chris Archer, another big name that appears on the market this summer or a smaller, quality discount arm, the mystery acquisition the Brewers will most likely make will have an impact down the stretch run.