Helping Black causes beyond the protests 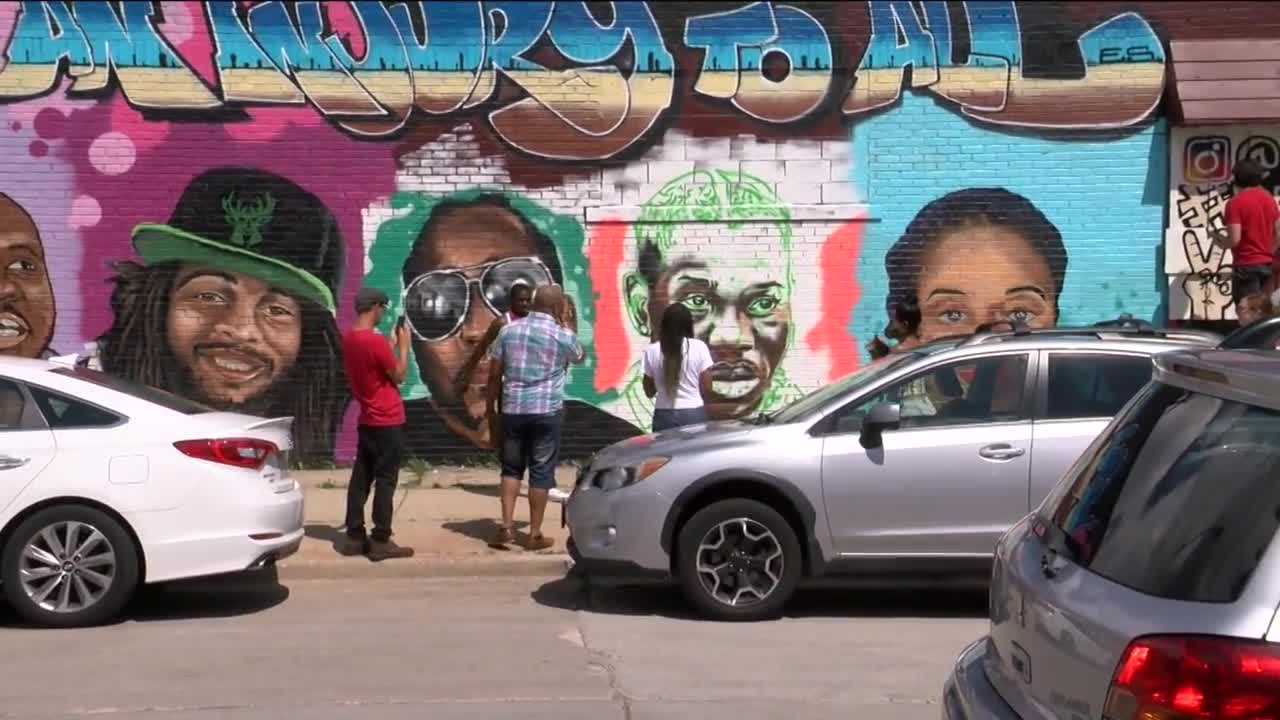 After nearly a month and a half of marches in George Floyd's name, change is happening.

MILWAUKEE — After nearly a month and a half of marches in George Floyd's name, change is happening.

Police departments are looking introspectively at what they can do differently.

Historical recognition is being made; Confederate statues are being taken down, discussions about making Juneteenth a federal holiday in Milwaukee while some national businesses have taken their own measures for their employees. Overall, conversations about racial inequities are happening more frequently.

Here in Milwaukee, a mural of roughly a dozen activists is the symbol of progress. The faces on the wall near 14th & Vliet have likely been seen every day since these marches started. Thursday, Sedan Smith, the older brother of Sylville Smith, who was killed by former Milwaukee Police Officer Dominique Heaggan Brown in 2016, watched as his own face was being spray-painted on the wall.

"This is the first time someone honored me in this type of way," Smith said. "It's a very, very, very big honor to have a mural. I'm very humble. At the end of the day, the work is not done yet. My work will never be done as a community activist."

Smith says, even after the protests in his brother's name, he's been blown away at the involvement in these latest protests; especially in how diverse the participants have been.

"The last month and a half has been support like I have never seen before," Smith said. "That right there, is the people's revolution. That's what our marching is about. It's about getting all walks of life to come together and understanding, injustice is something we need to be able to fight against together. We're changing the narrative about how we feel about changing the world. Starting here in Milwaukee, bringing people of all different ethnic backgrounds together."

To put it frankly, more white people than ever before are getting involved. Thousands have marched every single day. Portraits of a raised fist, traditionally filled in to represent a black fist, are now shown with every shade of skin. Symbolizing this is a fight everyone is involved in.

"It's absolutely important for white people to get involved," Liz Egan with MKE Seen said. "For us to have conversations, to learn more, to listen, to not take over and be supportive as much as possible."

Egan's work with MKE Seen brings floral installations to help support people of color. The first two installations were at America's Black Holocaust Museum and at the Sherman Phoenix. People came to take photos with the beautiful colorful arrangements, something that holds plenty of symbolism to the movement.

"There is a certain poetic connection there," Egan said. "The way we view nature, being something that can grow out of spaces in concrete or in the woods or whatever it might be. Flowers growing where it wouldn't typically grow."

The growth of this movement has risen from the concrete like the poem by the late, iconic hip-hop artist, Tupac Shakur. In the poem, he writes in part, "Long live the rose that grew from concrete when no one else ever cared!"

The poem represents how something beautiful can rise, despite its surroundings. Despite this movement existing for years, it has persevered and gained strength after the loss of each life at the hands of law enforcement.

Including Smith's own brother. While his name is immortalized because of what happened, the actions of people like Egan, elevating the cause, are helping with progress.

"I did not foresee the floral activism, I can say that for sure," Egan said. "But I'm glad to have found it. Every day is an opportunity to do something more. MKE Seen has kind of created that momentum for me personally to do something larger."

Egan's example shows a way everyone can get involved. She utilized her own skills to help amplify the message. The floral arrangements are a social media hit, with people sharing their own photos of the arrangements. On their own social media, Egan says they're uplifting various Black businesses and organizations as well in an effort to amplify their message.

For those who may not feel comfortable going into protests because of COVID-19, physical limitations, or other health concerns, donations to Black-led causes can go a long way.

"The less time we spend fundraising, the more we can do to keep pressure on folks," Rick Banks, Political Director and Organizer for Black Leaders Organizing Communities (BLOC) said. "We're communicating with elected officials and holding them accountable. It supports us on our voter outreach efforts as we educate people about what's coming up, what's on the ballot, and things like that."

Banks has been working in various levels of activism for the last six to seven years. The influx in donations over the last month and a half has been awe-inspiring.

"There was one day where we raised in the tens of thousands of dollars from individual donations," Banks said. "It's been incredibly exciting and humbling."

However, he wants people to know, there are a number of ways to show support without spending a penny.

"A donation could be a donation of your time," Smith said. "It doesn't have to be money. It could be you taking something from home to give to the people. If you have a lot of cases of water sitting around, people get dehydrated while we march all day long. Donations can come in all shapes and sizes."

Banks also encourages folks to research and support whatever organization they feel passionate about.

If you're able to donate money, please, check out these articles from OnMilwaukee and Milwaukee Magazine with information about Black-led organizations.