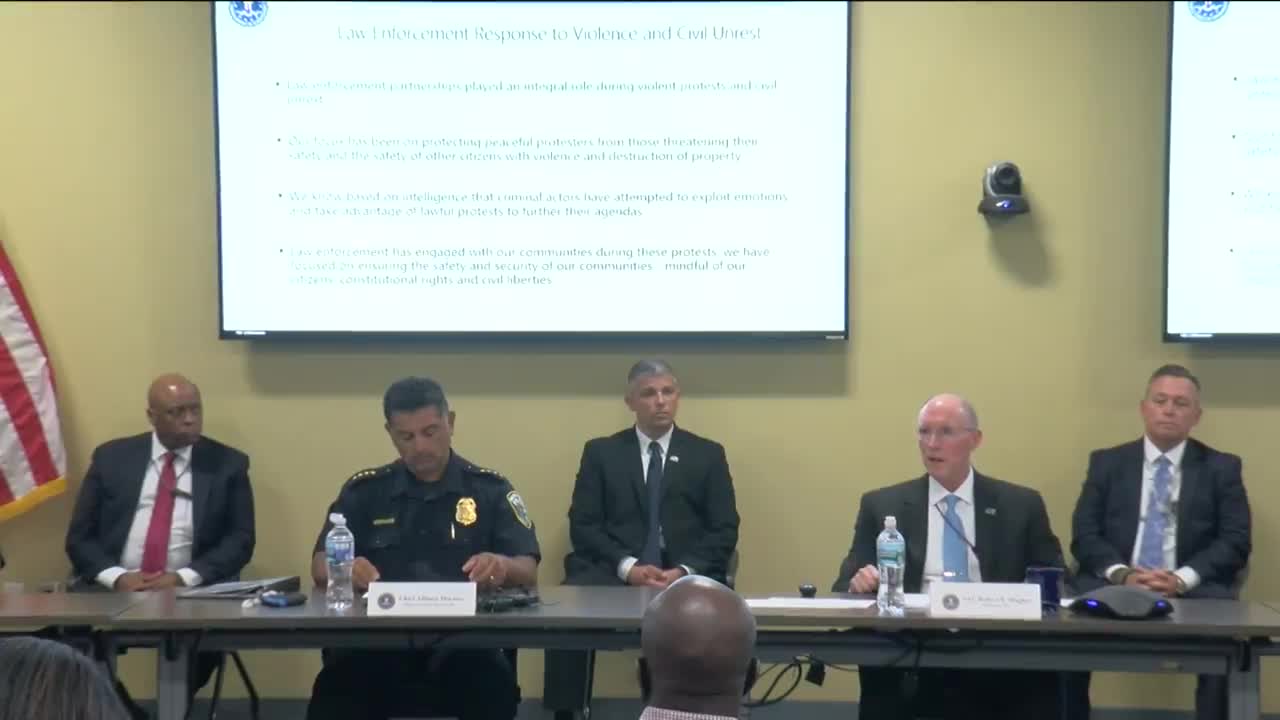 Local law enforcement leaders across Milwaukee County gathered Wednesday to address their response to protests, unrest, and threats to their departments.

MILWAUKEE — Local law enforcement leaders across Milwaukee County gathered Wednesday to address their response to protests, unrest, and threats to their departments.

Police chiefs say they hear the message behind local protests and they agree change is needed in how they operate. But, they also feel law enforcement is being unfairly villainized.

A panel of local, state, and federal law enforcement leaders came together for an open discussion with media, starting with a conversation about their tactics at protects across Milwaukee County over the past month.

Robert Hughes is the special agent in charge of Milwaukee’s FBI office. He said that even when just a few people incite violence at peaceful protests, law enforcement immediately changes its response.

“It’s not that we’re penalizing the people that are peacefully protesting, it’s we’re protecting them because they may be the recipient of the brick to the head,” he said.

Milwaukee Police Chief Alfonso Morales admits mistakes have been made by his department and others along the way.

“We’re not perfect. We've seen what didn’t work on Friday, we moved by Sunday and changed our strategies,” Chief Morales said.

Protesters have called for an end to police brutality against African Americans, but West Allis Police Chief Patrick Mitchell believes the animosity toward officers has gotten out of control.

“I see [officers] risk their lives for complete and absolute strangers and the thanks that they get for risking their life is to go to a Fourth of July party and have their nephew or niece not talk to them because of the occupation that they chose,” Chief Mitchell said.

Milwaukee County law enforcement leaders say they are committed to getting rid of bad cops in their departments. Sheriff Earnell Lucas said sweeping changes to the protocol will be implemented including banning choke-holds.

“We haven’t executed flawlessly throughout the protests here over the course of the last month or so, but what we’ve done is try to do the very best so that we can not see our city be set aflame,” he said. “We’ve got a lot of work ahead.”

Arguably the biggest concern among the panel is the growing effort to defund police and in particular, a potential 10-percent cut to Milwaukee’s budget. Chief Morales said things that build trust such as community outreach and body cameras could be the first to go.

“I think there’s a lot of good things have come from cameras, but our contract and our funding is going to be lost and I’m talking about the funding that paid for it, that’s paid so many years in advance so I think we’re coming up on our last year. How are we going to be able to fund our cameras?” Morales said.

Police chiefs want to make it known that every officer receives racial bias training when they are brought onto the force, but every department in Milwaukee County has agreed to require another round of implicate training within the next year.