Ivanka Trump at Olympics for politics, to back athletes 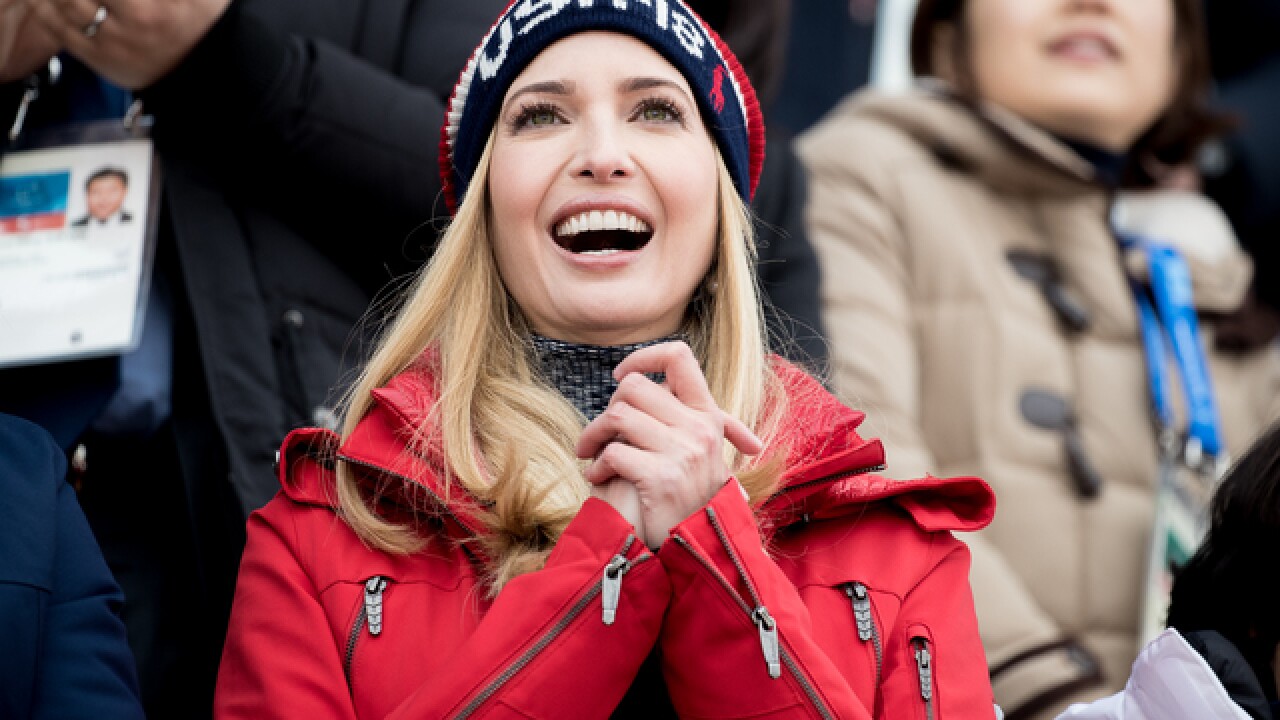 PYEONGCHANG, South Korea (AP) — U.S. President Donald Trump's daughter toured the 2018 Winter Olympics on Saturday, the morning after telling South Korea's president that she would use her visit to the Pyeongchang Games to advocate maximum pressure on North Korea to halt its nuclear program.

Ivanka Trump, one of her father's close advisers and a winter sports enthusiast herself, is leading the U.S. delegation at Sunday's closing ceremony for the Pyeongchang Games. Under cloudy skies, she watched her first event Saturday morning — Big Air snowboarding — before heading over to the American team's headquarters, USA House, to interact with some Olympians.

Among those she met: Garrett Hines, a former U.S. bobsledder and Army reservist.

"I heard you are part of the reserves. That's incredible," Trump said. "Thank you for your service, and thank you for serving as an inspiration to so many people in this capacity."

Before coming to the Olympic city in northeastern South Korea, Trump met and dined in the capital with South Korean President Moon Jae-in, who highlighted to her how the Olympics have served as a vehicle for dialogue between the two Koreas. Moon said the U.S. and South Korea should make use of the current mood of rapprochement between the Koreas in seeking denuclearization.

At a closed-door meeting before a banquet Friday night at the presidential compound, Moon told Trump that talks on denuclearization and the inter-Korean dialogue must move forward side by side, Moon's press secretary, Yoon Young-chan, told reporters.
Trump responded by pushing for joint efforts by the U.S. and South Korea to apply maximum pressure on North Korea, Yoon said.

The meeting and Olympic visit come as the Trump administration announced sanctions on more than 50 vessels, shipping companies and trade businesses to turn up the pressure on North Korea. U.S. officials said the president had discussed the action with Moon ahead of the announcement in Washington.

Differences in how the U.S. and South Korea hope to achieve denuclearization were apparent during the banquet. In her remarks, Ivanka Trump said she was in South Korea to celebrate the Olympics and to reaffirm the U.S. commitment to a "maximum pressure campaign to ensure that the Korean Peninsula is denuclearized."

Moon, for his part, hopes to make the Olympics an avenue for peace on the divided Korean Peninsula.

A smiling Trump, wearing a Team USA hat and red snowsuit, chatted with members of her delegation and South Korea first lady Kim Jung-suk. Also with her was IOC board member and 1998 hockey gold medalist Angela Ruggiero.

After the event ended, Trump spoke with some of the South Korean athletes who were guests of the delegation and posed for selfies.

Ivanka Trump's appearance at the closing on behalf of the White House and the United States is a softer bookend to Vice President Mike Pence's awkward visit during the opening ceremony.

She has some popularity in Asia, and the perception of her as a smoother player in her father's administration — and, not inconsequentially, a younger one as well — allows the United States a photogenic representative at the end of a games dominated by unusually adept PR moves from North Korea.

In addition to her presence at the Olympics' closing ceremony Sunday, a high-level North Korean delegation will also attend. So the big question is this: Will she end up in the same position as Pence — in a VIP box with a North Korean delegation nearby? And if so, how will she respond? Will she, unlike Pence, choose to interact?

The answer will provide a coda to an extraordinary two weeks of Olympic political optics — and offer hints of the Trump administration's approach in coming weeks when it comes to the recent thawing of North-South relations on the Korean Peninsula.

"North Korea's participation in the Winter Olympic Games has served as an opportunity for us to engage in active discussions between the two Koreas and this has led to lowering of tensions on the peninsula and an improvement in inter-Korean relations," Moon said Friday during his meeting with Trump.

Moon met Kim Yo Jong, the sister of North Korean leader Kim Jong Un, and Kim Yong Nam, North Korea's nominal head of state, a day after the opening ceremony earlier this month and urged North Korea to do more to engage in a dialogue with the United States.

For now, there are no signs that Ivanka Trump would meet Kim Yong Chol, vice chairman of North Korea's ruling Workers' Party Central Committee, who is to attend the closing ceremony.

Back in Washington, Trump tweeted praise about his offspring as she touched down in Seoul. "My daughter, Ivanka, just arrived in South Korea. We cannot have a better, or smarter, person representing our country."