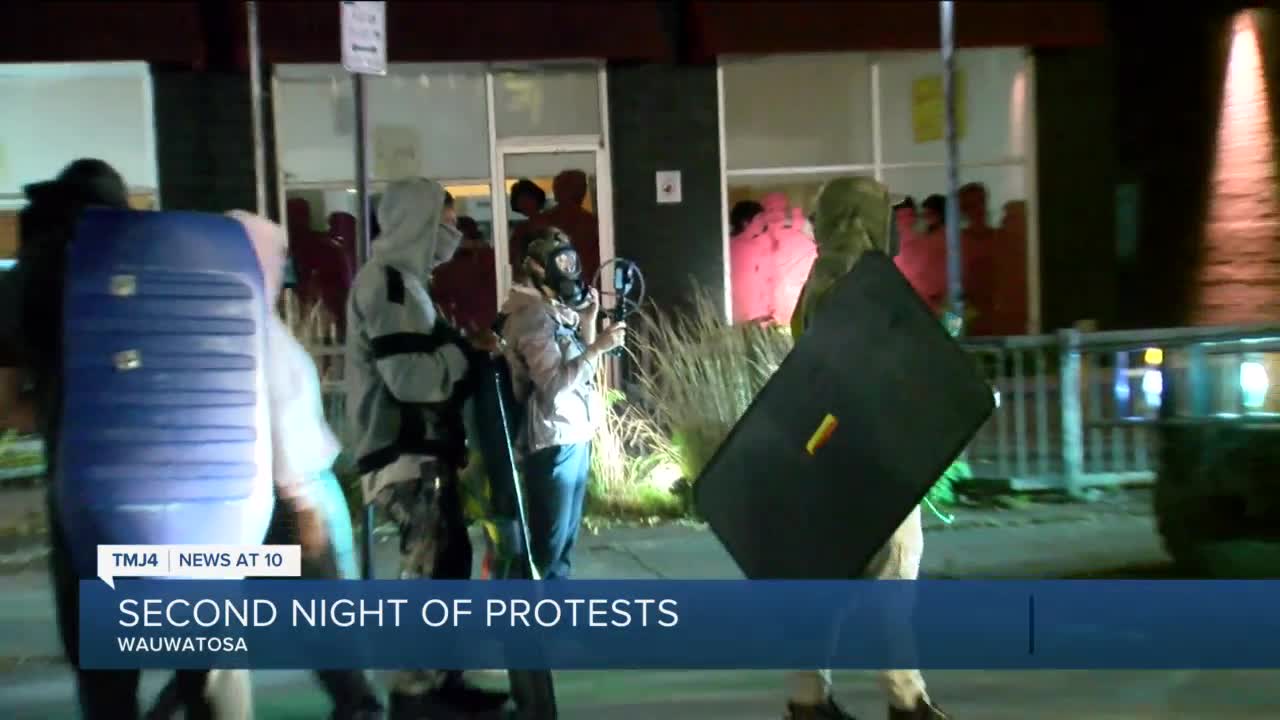 It is the 2nd night of protests following the decision to not charge Police Officer Joseph Mensah. 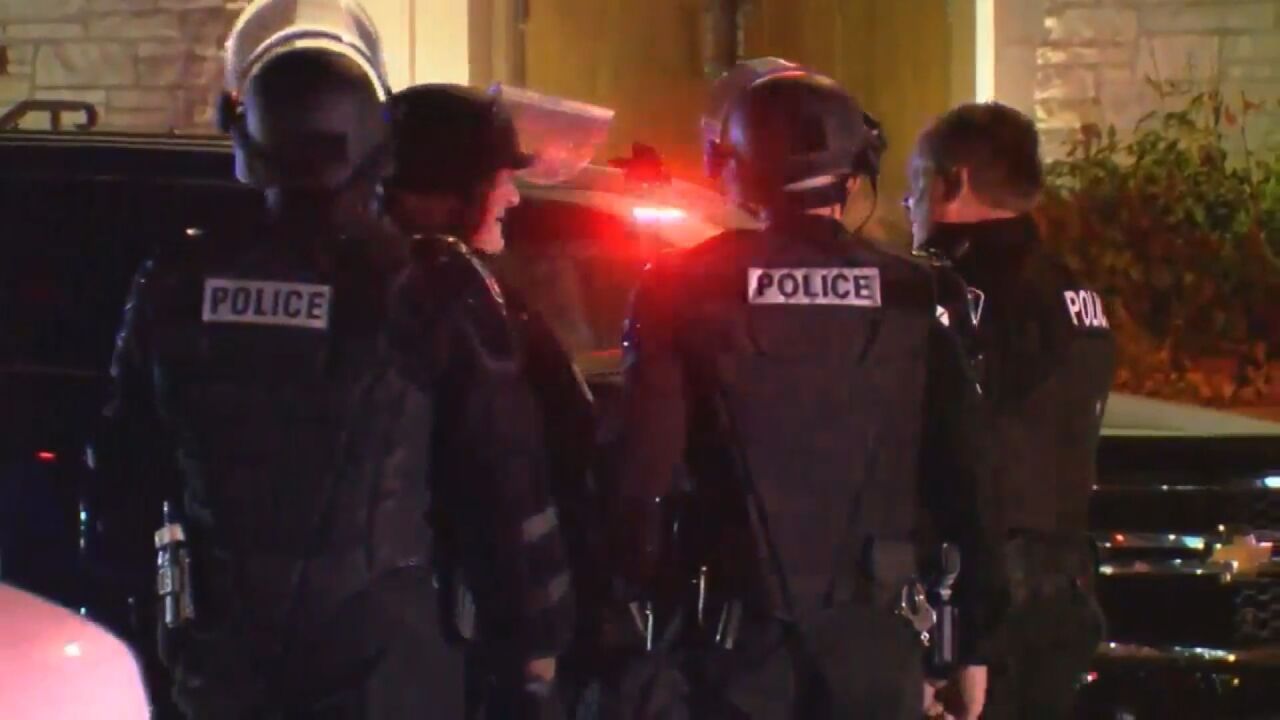 WAUWATOSA / MILWAUKEE — Protesters marched in Wauwatosa for the second night, as people express outrage over the decision to not charge police officer Joseph Mensah in the death of Alvin Cole.

In contrast to the first night of protests, law enforcement arrested a number of protesters for violating the 7 p.m. curfew Thursday night - including Alvin Cole's mother and two sisters.

Officer Mensah shot and killed Cole on Feb. 2 outside of Mayfair Mall. Police said the 17-year-old had fired a gun at officers first before being shot. A report from an independent investigator found, however, that Cole did not fire at the officers, but accidentally shot himself in the arm.

Bookmark this page and come back often for the latest updates:

The Milwaukee Alliance Against Racist and Political Repression says Jacob Blake, Sr. (the father of Jacob Blake) was arrested with Alvin Cole's mother and two sisters during protests Thursday night.

They demanded that law enforcement release them immediately and that the officers involved in their arrest me held accountable for "excessive force."

The group also demanded medical expenses brought by Tracy's injury, which required hospital treatment Thursday night, be covered in full by the City of Wauwatosa.

Tracy Cole is out of the hospital after being arrested and injured, and urges protesters to "stay strong," she tells TMJ4 News.

Kimberley Cy Motley, the Cole family's attorney, tells TMJ4 that they want people to understand how avoidable this could’ve been had Officer Mensah been off the force.

State Rep. LaKeshia Myers tweeted that 11 people were arrested during protests in Wauwatosa Thursday night, seven women and four men. They are being held by West Allis police, she said, and will receive citations for violating the curfew and will be released.

Update: I have received word that those arrested have been taken to @WestAllisPD. There were 11 people arrested (7 women/4 men). They will receive citations for emergency curfew violation. They are all slated to be released.

10:26 p.m. -- Alvin Cole's 2 sisters arrested with their mother during protests

9:53 p.m. -- Alvin Cole's mother, 2 sisters are arrested by police and brought to hospital

Alvin Cole's mother, Tracy, was detained by law enforcement and brought to Froedtert Hospital with an injury to her arm Thursday night.

Cole's family, including Tracy and Alvin's two sisters, made an emotional plea for justice following the decision to not charge Officer Joseph Mensah. They met with the DA just before the decision was announced.

Wauwatosa police say one of the people they arrested, a 49-year-old woman, requested medical attention. She was brought to the hospital.

One of the individuals arrested, a 49 year-old female, requested medical attention. Wauwatosa Fire Department was promptly summoned, and this individual was transported to the hospital.

Waukwatosa police confirm officers have made several arrests. "We ultimately want voluntary compliance of the emergency curfew," the department tweeted.

Law Enforcement has made several arrests of members from a crowd violating lawful orders. We ultimately want voluntary compliance of the emergency curfew.

TMJ4 crews saw a handcuffed woman being taken into an ambulance [Update: identified as Alvin Cole's mother, Tracy. See above for details]. A large number of protesters were arrested near 76th & Milwaukee.

Law enforcement are moving stranded vehicles from the roadway.

Woman cuffed is being taken into an ambulance. We believe a large number of protesters were arrested here near 76th & Milwaukee, right outside of Tosa East.

Law enforcement is getting in some of the stranded vehicles and moving them from the roadway. pic.twitter.com/FQIoZYgZ61

8:45 p.m. -- A number of people are being arrested for violating curfew

TMJ4's crews have seen several people being arrested for violating the 7 p.m. curfew.

Tiffany Henry, a community activist and leader with protesters tonight, has been arrested while live on Facebook, TMJ4's Shaun Gallagher reports.

Henry was commenting on the cost of the law enforcement presence in Wauwatosa during the FB Live when she was detained in an unmarked squad car.

TMJ4 News is working to get comment from police.

Community Activist, Tiffany Henry, was just arrested while on a Facebook Live.

She was commenting on the cost of the massive law enforcement presence while Wauwatosa Police do not have body cameras. She was detained and in the back of an unmarked squad car. pic.twitter.com/mwivi2F4r6

8:02 p.m. -- Members of the National Guard, law enforcement prepare at a staging area

TMJ4's Shaun Gallagher has videos from the scene:

Wauwatosa police say officers and members of the Wisconsin National Guard are monitoring a group of protesters marching in Wauwatosa, near North 67th Street and West North Avenue.

Because they are violating curfew, WPD says they are trying to "redirect" the group.

Police and National Guard are monitoring a group of demonstrators moving through Wauwatosa streets near N. 67 St. / W. North Av. There is a 7:00 pm curfew that all of these demonstrators are in violation of. Our personnel are working to redirect the group. #TosaPDProtects

RECAP: First night of protests in Wauwatosa and Milwaukee

This comes on the heels of the first night of protests and unrest on Wednesday. Several hours after District Attorney John Chisholm announced that Officer Mensah would not face charges, dozens of protesters marched onto the freeway.

A crowd of protesters then marched down North Avenue in Wauwatosa and through several neighborhoods. Law enforcement attempted to block their movement to Mayfair Mall, where the fatal shooting of Cole happened last February.

About 150 people were a part of that crowd, according to Wauwatosa police.

As TMJ4 News reported, many storefronts had their windows broken. Law enforcement fired tear gas at the crowd, after they disregarded orders to disperse, according to Wauwatosa police.

A video also showed people chucking objects into the windows of apartments.

WPD urged residents to stay in orders during the unrest. A curfew remains in effect starting at 7 p.m. and ending at 6 a.m. every day until Oct. 12.

One person was arrested by Wauwatosa police Wednesday night.