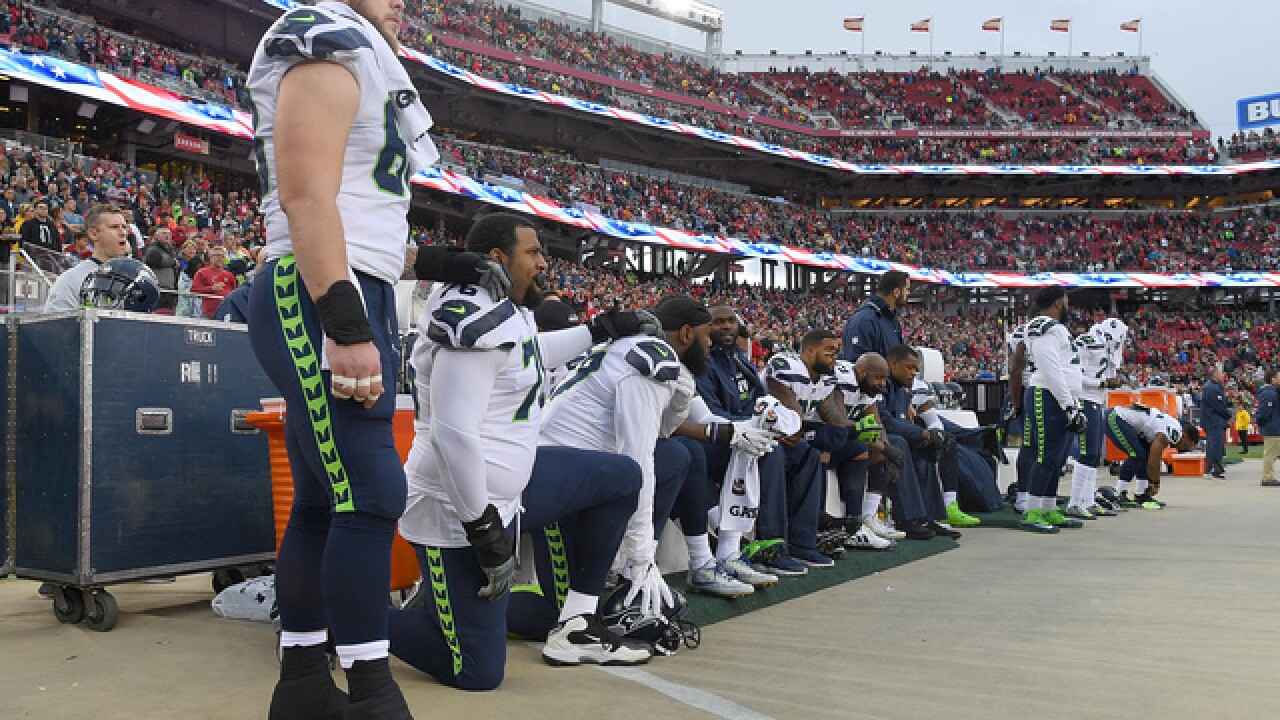 Copyright Getty Images
Thearon W. Henderson
<p>SANTA CLARA, CA - NOVEMBER 26: Several Seattle Seahawks players sits on the bench and kneel during the playing of the National Anthem prior to the start of their NFL game against the San Francisco 49ers at Levi's Stadium on November 26, 2017 in Santa Clara, California. (Photo by Thearon W. Henderson/Getty Images)</p>

RENTON, Wash. (AP) — Seattle Seahawks wide receiver Doug Baldwin had harsh words for the comments made by President Donald Trump regarding the NFL's new national anthem policy on Thursday, as players began to process the new mandate from the league's owners.

Baldwin has been a leading voice from the players' perspective for why there were protests last season even though Baldwin never participated in kneeling or sitting on the sidelines during "The Star-Spangled Banner."

He spoke passionately after the Seahawks concluded their offseason workout and sounded offended by the president's comments to "Fox & Friends" in an interview that aired Thursday saying, "maybe you shouldn't be in the country" if you don't stand for the anthem.

"He's an idiot. Plain and simple," Baldwin said. "I respect the man because he's a human being first and foremost, but he's just being divisive, which is not surprising. It is what it is. But for him to say anybody who doesn't follow his viewpoints or his constituents viewpoints should be kicked out of the country is not very empathetic. It's not very American like, actually, to me. It's not very patriotic. It's not what this country was founded upon. It's kind of ironic to me the President of the United States is contradicting what our country is really built on."

Baldwin was among a handful of players that have expressed frustration and disappointment with the NFL mandating players must stand for the national anthem if they're on the field, though they now have the option of remaining in the locker room for the playing of the anthem and carry on the campaigns against social injustice.

Even normally reserved Seattle quarterback Russell Wilson agreed with the sentiment that the owners' decision was a message to players to essentially be quiet.

"Pretty much. I think that's part of it. It seems that way," Wilson said. "But I think a policy right or wrong is not going to fix our problems."

The new policy allows teams to adopt their own workplace rules, which many players interpreted as a backhanded way of subjecting them to fines, suspensions or loss of jobs should they carry on with the protests.

For Baldwin, who is among the players to have worked with the league on addressing social concerns and community programs, the anthem decision felt like a step back.

"If you're asking my opinion, I think that in conjunction with the NFL, the way that things were going, I felt on the Players Coalition side of things we were coming to an amicable agreement and relationship and working toward initiatives and causes that we wanted to see as players addressed, I thought that you would see the demonstrations and the issues within the NFL dissipate," Baldwin said.

"But again, when you stoke the fire and inflame a gap that was really dissipating at the time, diffusing, you cause more problems. That's why I say I think the NFL missed it."

Others around the league didn't see the policy as a potential issue.

"I'm really not too worried about it. I would expect that everybody's gonna be out there with their hand over their heart, showing respect to the flag and to the country," New Orleans quarterback Drew Brees said.

But teammate Demario Davis had mixed emotions about the policy. His father served in the military, but he also understands why players have been protesting.

"I just think that when you love something — you care about it — you want to work to get it right. I love my children. When they do wrong things, I'm going to let them know they're doing wrong things. I'm not just going to sweep it under the rug because I love them," Davis said.

"I think that's the difference between patriotism and nationalism. Nationalism is loving your country just to love it, you know, even when it's right or wrong, you're going to take the side of your country. Patriotism is loving it enough to sacrifice for it, but also to call it (out) when it's wrong.

"The people who are speaking up for the people who are hurting have a deep love and devotion for our country. That's kind of gotten misconstrued at times. But it's important for people to understand that."

The decision by the owners was an attempt to quell a firestorm by moving protests away from the public eye and potentially lure back disgruntled fans. But in the process they may have disgruntled their employees and rekindled what appeared to be an issue that was dying down.

"I feel like it might want to make people just want to rebel, just like when Trump said what he said last year," Denver linebacker Brandon Marshall said.