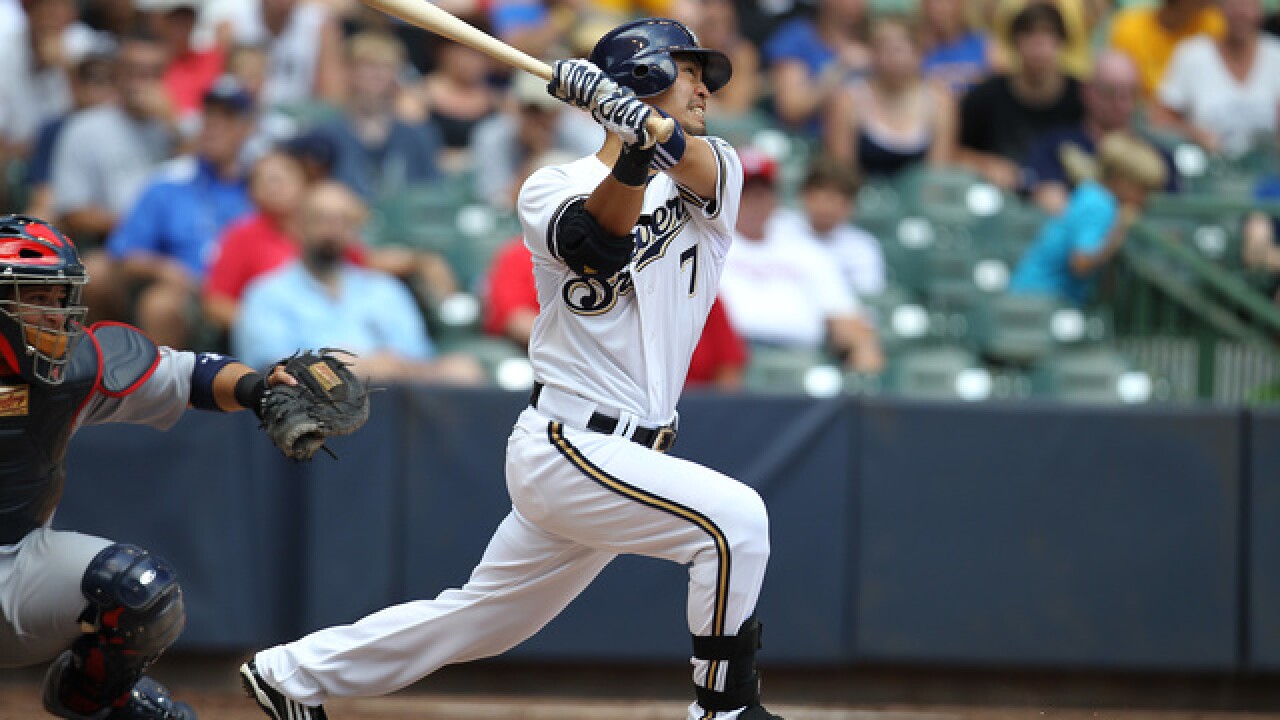 Image copyright 2012 Getty Images. All rights reserved. This material may not be published, broadcast, rewritten, or redistributed.
Mike McGinnis
<p>MILWAUKEE, WI - JULY 18: Norichika Aoki #7 of the Milwaukee Brewers pops up to Jon Jay of the St Louis Cardinals in center field for an out in the bottom of the 7th inning at Miller Park on July 18, 2012 in Milwaukee, Wisconsin. (Photo by Mike McGinnis/Getty Images)</p>

The last time the Brewers started their home season off against the St. Louis Cardinals was 2012. Let's flashback and take a look at that day.

The 2012 Brewers were fresh off an NLCS loss to the Cardinals, a series most Brewer fans hate to remember, but this was their chance to heal a little bit and get back at the Birds on Opening Day.

The bad news for Brewers' fans: There was a gaping 5 foot, 11 inch, 275 pound hole in their lineup after Prince Fielder left for Detroit in free agency during the offseason.

But the Cardinals had a behemoth of their own to replace. They lost Albert Pujols to the Los Angeles Angels in free agency.

The offseason roster changes for the Brewers weren't all bad though. Zach Grienke, traded for during the middle of last season, still loomed large on the pitching staff, and they picked up Aramis Ramirez to replace some of the power left behind.

For nostalgia's sake, here was their starting lineup that day:

But despite an impressive lineup, pitching staff, and potential to contend, none of that really showed up on opening day.

The Brewers did get an early 2-0 lead after a Carlos Gomez triple and Ramirez groundout, but opening day starter, Yovani Gallardo wouldn't keep that lead long.

The 26-year-old, coming off a season where he finished seventh in the Cy Young voting, gave up four home runs to the next nine batter he faced and got an early shower from manager Ron Roenicke.

In all, Gallardo gave up 6 earned through 3.2 innings and surrendered 5 walks along the way.

It wasn't just Gallardo that got hammered.

Outside of Marco Estrada, who threw 1.1 scoreless, everyone the Brewers brought into the game gave up runs.

Manny Parra gave up 1 earned in 2 innings and Tim Dillard surrendered 3 over the final 2 innings.

On the other side, Jamie Garcia dominated the Crew's lineup.

The tricky lefty was hitting all his spots and cruised through six innings while allowing only two earned runs.

The Brewers finallly broke things open against Kyle McClellan in the 9th after a George Kottaras home run plate three runs, but it was too little too late.

The final score was 11-5 and it set the Brewers down a lonely road in 2012 that finished with an 85-77 record, a third place finish in the NL central and much-maligned midseason trade of Grienke that netted a return of Johnny Hellweg, Ariel Pena and Jean Segura.

Hopefully, for Brewers' fans, 2018 starts and finishes a bit better.