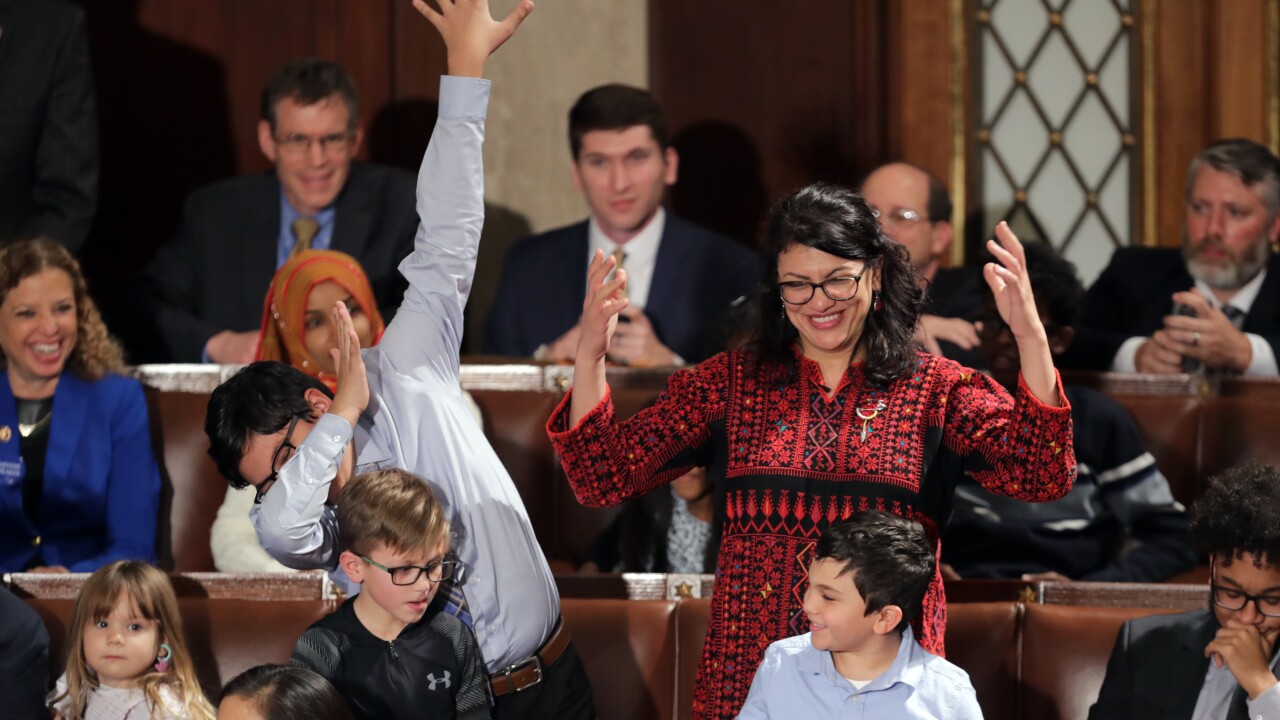 Chip Somodevilla/Getty Images
WASHINGTON, DC - JANUARY 3: Rep.-elect Rashida Tlaib (D-MI) votes for Speaker-designate Rep. Nancy Pelosi (D-CA) along with her kids during the first session of the 116th Congress at the U.S. Capitol January 03, 2019 in Washington, DC. Under the cloud of a partial federal government shutdown, Pelosi will reclaim her former title as Speaker of the House and her fellow Democrats will take control of the House of Representatives for the second time in eight years. (Photo by Chip Somodevilla/Getty Images)

(CNN) -- Hours after she was sworn in to Congress, Michigan Democratic Rep. Rashida Tlaib used an expletive Thursday in pushing for impeaching President Donald Trump.

Speaking to a crowd at an event sponsored by the progressive group MoveOn, Tlaib recalled the moment she won her election in November.

"And when your son looks at you and says, 'Mama look, you won. Bullies don't win,' and I said, 'Baby, they don't,' because we're gonna go in there and we're going to impeach the motherf****r," Tlaib said Thursday, speaking of Trump, according to a video posted on Twitter by Nestor Ruiz, an activist with United We Dream.

Tlaib also penned an op-ed Thursday arguing that "the time for impeachment proceedings is now."

"President Donald Trump is a direct and serious threat to our country," she wrote in an op-ed published Thursday in the Detroit Free Press with John Bonifaz, co-founder of the nonprofit Free Speech For People. "On an almost daily basis, he attacks our Constitution, our democracy, the rule of law and the people who are in this country. His conduct has created a constitutional crisis that we must confront now."

During her campaign, Tlaib made clear that once in Congress she was going to push for impeachment against Trump.


"Why am I running? Because this is about electing the jury to impeach (POTUS) and I will make a heck of juror," she wrote on Twitter in March.

More than a year before she ran for Congress, Tlaib made headlines for being thrown out of an event in Michigan where Trump was speaking. She had interrupted the then-Republican presidential nominee to ask if he had ever read the Constitution.

Tlaib is one of few Democratic lawmakers to call for Trump's removal from office, however House Speaker Nancy Pelosi and other House Democratic leaders have tread more carefully around the topic of impeachment.

In an interview with NBC News this week, Pelosi didn't rule out pursuing impeachment against Trump, but said Democrats would wait until special counsel Robert Mueller's investigation concludes.