MILWAUKEE – Milwaukee police are investigating a “suspicious package/device” that was found on top of an electrical box in downtown Milwaukee.

The device was reported to police just before 7 a.m. Monday in the 100 block of W. Wisconsin Avenue. 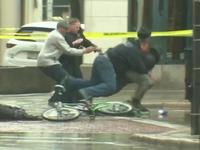 Police say their efforts are concerned with a backpack at that location.

Police and the bomb squad are still at the scene of the investigation.

During their investigation, a man was taken into custody after he crossed the police tape line and dumped out the contents inside the backpack.

Police have not released any other information at this time.