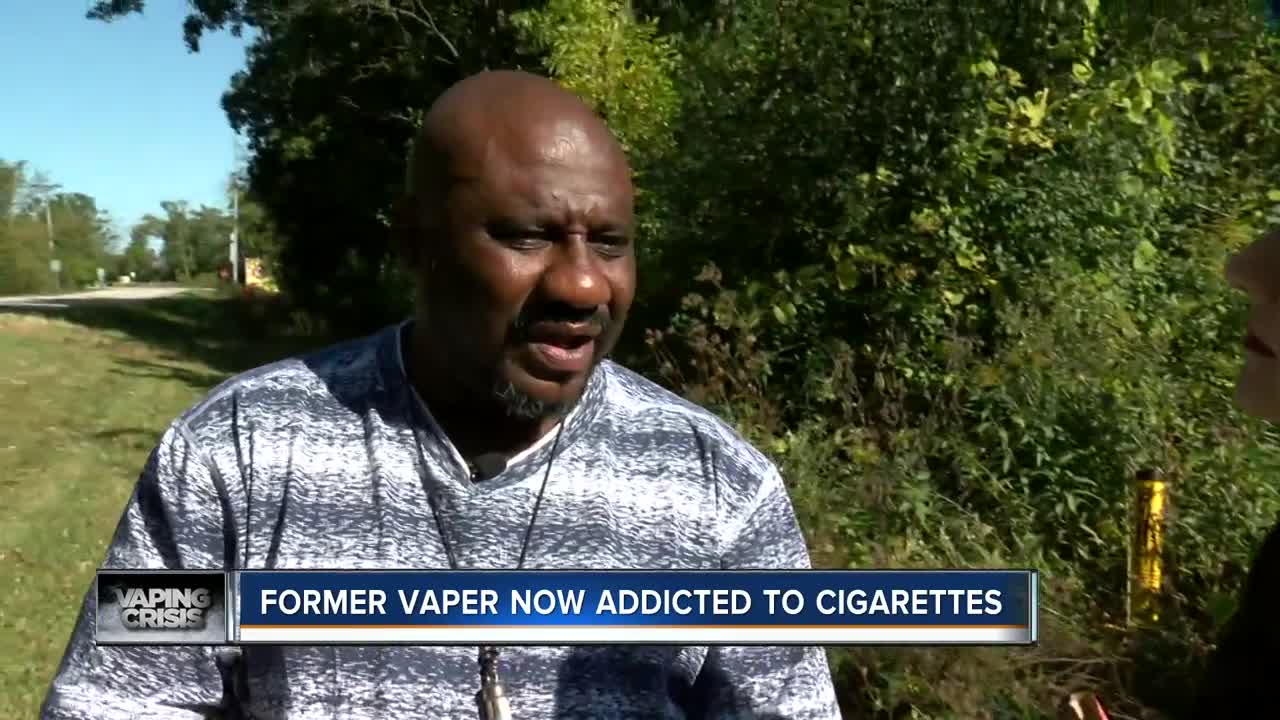 Around the fall of 2018, TODAY'S TMJ4 interviewed a Milwaukee man, Robert Lewis, after he contacted our station saying his vape exploded in his kitchen. The batteries burst out of his device leaving burn marks on his kitchen wall and floor.

Kristin Byrne will have more on this story Wednesday on Live at 5.

MILWAUKEE -- Around the fall of 2018, TODAY'S TMJ4 interviewed a Milwaukee man, Robert Lewis, after he contacted our station saying his vape exploded in his kitchen. The batteries burst out of his device leaving burn marks on his kitchen wall and floor.

One year later, our camera crew reunited with Lewis, who back in 2018, told us the incident scared him enough to stop vaping entirely. He said the same day, he started smoking cigarettes again and he’s smoking more than he was before.

“I have been having health problems you know with my lungs,” Lewis said.

Before his vape days, Lewis was at half a pack a week.

“Now I'm up to like three-quarters of a pack or sometimes a whole pack,” he continued.

Lewis said he was using vape juice with six milligrams of nicotine in his SMOKTech vape. According to research at Penn State, his Newport cigarette's each have 13.4 milligrams.

“That made me smoke a lot more to get that desired effect,” Lewis said.

“By me thinking it was safer than cigarettes, I vaped heavy,” he said.

Doctor Lucian Durham III is a Cardiothoracic surgeon with Froedtert.

“It makes it seem like a much safer alternative. You do hear all these people saying I'm just using it to quit smoking, but they're delivering sometimes two or three times the dose of nicotine on a per-occurrence basis than they would with any of the stop-smoking aids or even smoking cigarettes,” Doctor Durham said.

For years, vaping ads have saturated the market. The FDA hasn't approved any e-cigarette for smoking cessation. After the vape company Juul came out with these commercials, the federal agency warned the company it's illegal to market vapes

as less harmful than cigarettes. Juul announced it would pull its ads in the United States.

“When you hear it all over the TV that it's the right thing to do, that it will help you stop smoking, then you see everybody vaping, you're like let me ride this train,” Lewis said.

That ride has left Robert Lewis with some health problems: a bad cough and inflamed lungs according to his doctor. Last fall's vape explosion in his kitchen seemed to spark it all.

“My lungs were burning from the fumes from the battery and I started back smoking and shortly after that I developed this cough and it's just been getting worse and worse,” Lewis said.