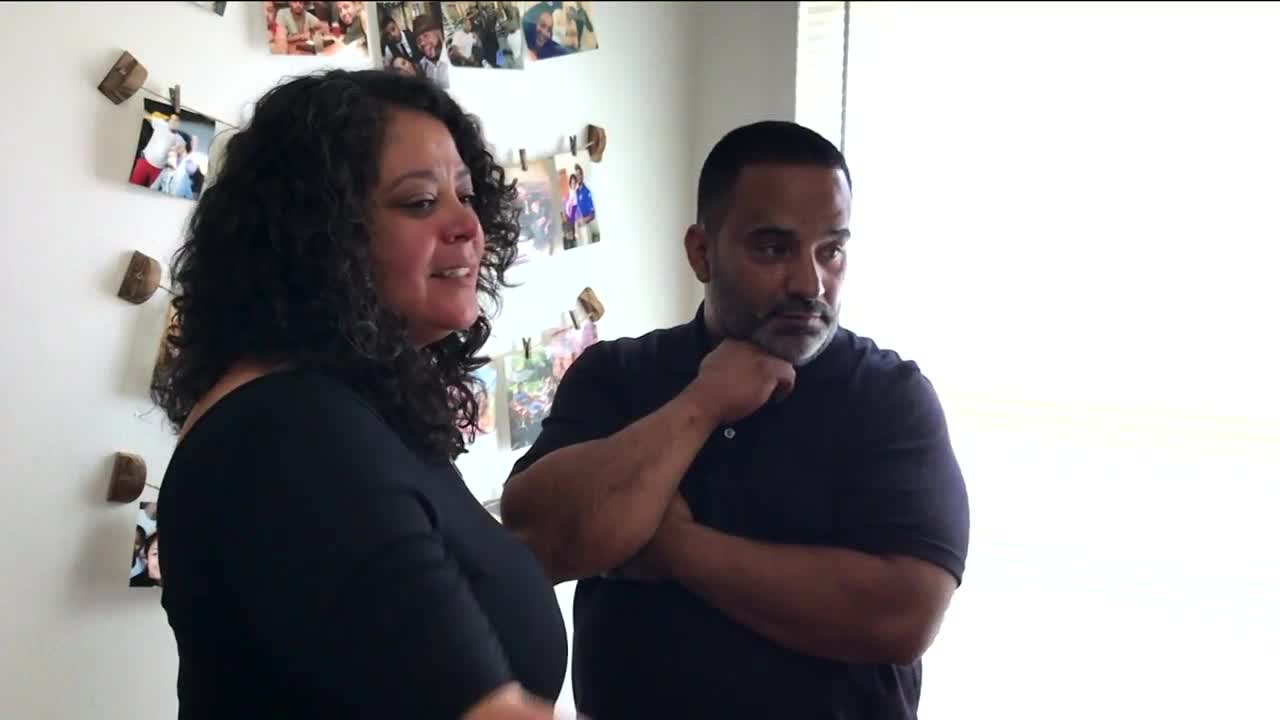 At the end of the month a Milwaukee police officer accused of killing a 25-year-old man while he was off-duty will make his first appearance in court.

MILWAUKEE — A suspended Milwaukee police officer accused of killing a 25-year-old man while he was off-duty will make his first appearance in court later this month. The family of that victim continues to question what happened as they pursue justice against that officer.

These days the Acevedo family finds comfort in a room surrounded by images of Joel, feet away from his ashes. It’s a place where his parents, Maribel and Jose, have learned to reflect and share memories.

“He had this energy and this smile about him that just lit up the room,” Maribel said.

However, more than a month after losing their son, the pain is still fresh.

“It feels like a big piece of my heart is gone. You get frustrated, you get angry,” Maribel said.

Investigators say 32-year-old Michael Mattioli is responsible for the death of Joel Acevedo and is now facing a charge of reckless homicide. They say Mattioli put Joel in a chokehold that went too far.

According to the criminal complaint, the officer had friends at his home near 45th and Cleveland for a gathering while he was off-duty on April 19.

Mattioli told police that he woke up the next morning to find Acevedo going through the pockets of his pants and that Acevedo also punched another person in the house.

“It wasn’t a fight like they’re painting it, it was Joel defending himself trying to go home and they held him,” Jose said.

His family believes that body camera video and the initial 911 call will prove that in court.

Jose and Maribel are also urging police to arrest the witnesses who they say played a role in the crime. They’re asking the department fire Mattioli as well.

Mattioli posted bond before prosecutors upgraded his charge to reckless homicide. His job status is now in the hands of the City of Milwaukee Fire and Police Commission, which has publicly committed to a transparent investigation.

Mayor Tom Barrett has called for Mattioli’s immediate termination more than once, most recently after the killing of George Floyd in Minneapolis.

“We feel the pain, we know what it is. The difference is that his was publicized and that’s so wrong, but our son it was done behind doors, closed doors,” Jose said.

Despite this, the Acevedos and their lawyer, B’Ivory LaMarr feel the case in Minnesota could help them here at home in Milwaukee.

“It does reflect some light to this case,” Maribel said.

“We hope that these type of instances represent a change amongst America and how police departments operate, how they terminate these bad actors when they do happen,” LaMarr said.

There is no measure of equivalence between the charges against Mr. Mattioli and the senseless killing of George Floyd in Minneapolis or the larger and real systemic issues underlying the nationwide protests that Mr. Floyd’s death has sparked. This is categorically not a case of a white cop abusing his position of power against a person of color. Mr. Mattioli and Mr. Acevedo were friends, and Mr. Acevedo was an invited guest into Mr. Mattioli’s home until he was caught trying to steal and physically assaulted another. Mr. Acevedo’s unforeseen death is a tragedy, but it is not the product of systemic failures or racism. There is a sad irony in the fact that for so many years the powers that be have turned a blind eye to widespread deprivation of citizens’ civil rights in the streets, only now to charge an off-duty officer confronted with criminality in his own home exercising the same rights and privileges that all citizens possess. It is, in fact, fair to question whether Mr. Mattioli would have been charged if he was not a police officer, but instead only a homeowner confronted with a similar situation.

“I’m just upset. I’m upset at how the system treated us,” Jose said.

It’s taken the Acevedos time to speak out, but they’re now going public in the hopes of getting answers about the death of their son.

Mattioli remains on full suspension from the Milwaukee Police Department. He’s set to make his initial appearance in court on June 24. If convicted, he could face up to 60 years behind bars.