Wentz off to perfect start, but Eagles fall 24-9 to Packers 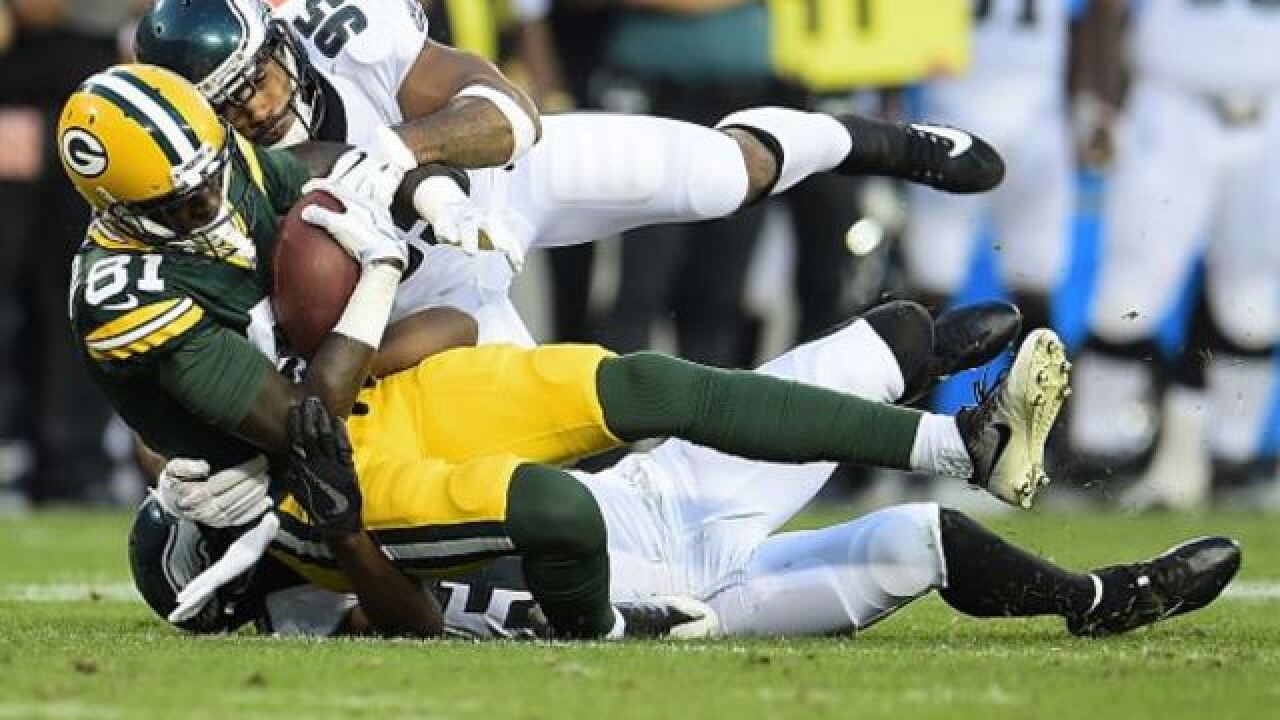 Image copyright 2017 Getty Images. All rights reserved. This material may not be published, broadcast, rewritten, or redistributed.
Hobe, Marty

The Green Bay Packers might need to keep working on tackling, though they're off to a good start in creating turnovers.

Wentz went 4 for 4 for 56 yards and a score on his first series, eluding a potential sack and burning the Packers on third and fourth downs in Philadelphia's 24-9 loss on Thursday night.

He did his best impression of elusive Packers quarterback Aaron Rodgers, who was a healthy scratch for the first preseason game of the year.

The Eagles got off to a nice start against Green Bay's first-string defense, though they did turn the ball over three times in the second quarter with backup quarterback Matt McGloin behind center. Philadelphia is looking to improve a pass offense that ranked 24th in the NFL last season.

Free agent addition Alshon Jeffery didn't play on Thursday. Nelson Agholor, who is having a good camp, didn't have a catch. But Wentz found rookie Mack Hollins, the team's fourth-draft pick, for a 38-yard touchdown pass on third-and-13 with 6:33 left in the first quarter after the quarterback eluded rushing linebacker Clay Matthews' grasp.

Cornerbacks Quinten Rollins and Kevin King each missed tackles as Hollins crossed right-to-left across the field on his way to the end zone. The Packers had problems at the cornerback position last season.

Wentz was done after his opening series, while backup Brett Hundley started at quarterback for Green Bay with Rodgers sitting out. Hundley picked up the pace after a sluggish start as the Packers defense started forcing turnovers.

Hundley pump-faked before finding Jeff Janis in stride down the right side of the end zone for a 20-yard touchdown pass for a 14-6 lead with 8:25 left in the second quarter. The Packers capitalized after cornerback LaDarius Gunter forced tight end Trey Burton to fumble at the Eagles 40.

Hundley finished 8 of 15 for 90 yards before sitting out the second half.

"We had a rough start there. I think both teams are obviously struggling handling the ball a little bit tonight -- first time out, a little slick," Packers coach Mike McCarthy said. "We have to take care of the football and we have to take it away."

Joe Thomas had an interception, while King was credited with a forced fumble.

The Packers may have found a new threat in the return game in speedy second-year receiver Trevor Davis, who ran a punt back 68 yards in the second quarter for a touchdown. Davis also had a 26-yard punt return in the third quarter.

Eagles: DE Derek Barnett, the 14th overall pick in the draft out of Tennessee, had two sacks in the first half.

Packers: King, the team's second-round draft pick out of Washington, backed up his reputation as a physical cornerback with two hard open-field tackles in the second quarter.

Packers rookie WR Malachi Dupre was taken off on a stretcher after fumbling on a reception following a hard hit to the chest by Eagles S Tre Sullivan with 14:14 left in the game. The Packers said that Dupre had movement and feeling in his arms and legs, and he was taken to a hospital for evaluation.