Protecting Rodgers at a premium when Packers face Bears 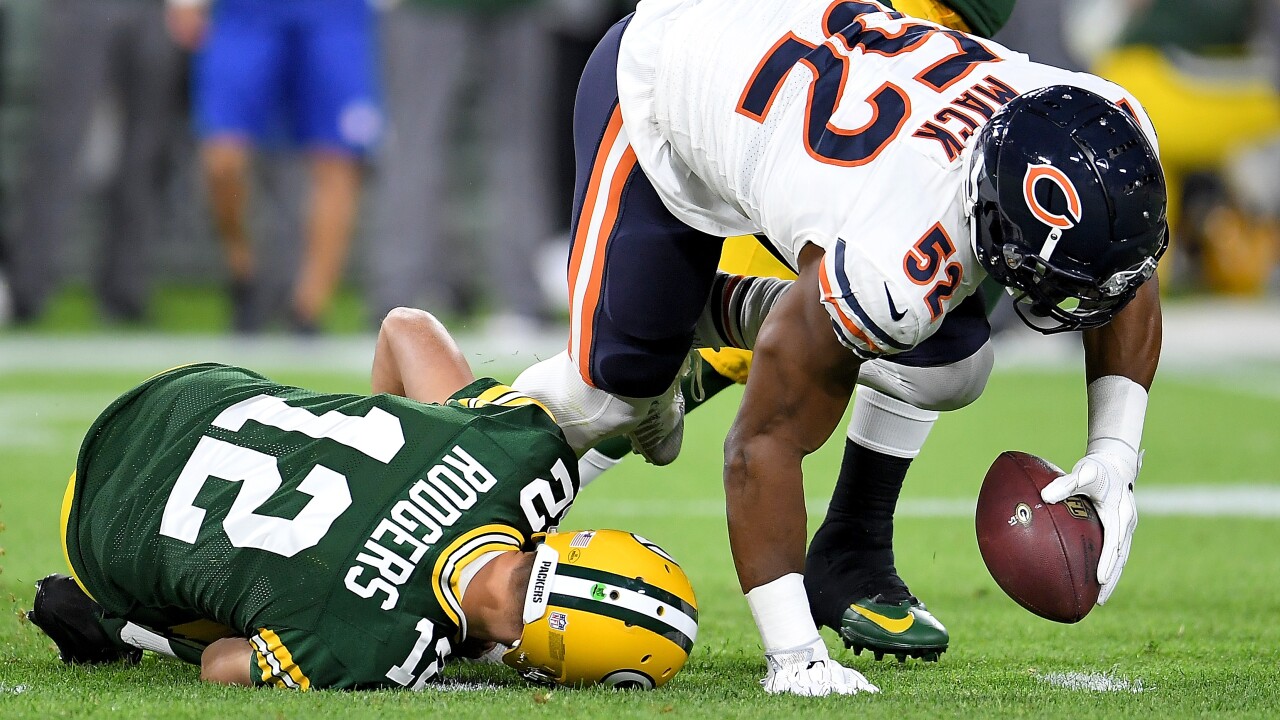 There's plenty of film to watch. The rest of that Chicago defense is pretty good, too.

Now Green Bay must face the NFC's top-ranked unit on the road on Sunday, a week after Chicago tripped up the high-octane Los Angeles Rams at Soldier Field.

"You don't have to go on and rant about how good Khalil is and all that stuff. Everybody knows who Khalil Mack is for a reason," said Spriggs, who started last week for veteran Bryan Bulaga. "I think he brings a level of confidence to everybody on the defense, and we just have to key on that and make hay when we get the chances."

The right side of the Packers' line could especially be a pressure point if Spriggs, a third-year player, starts again. Bulaga missed practice again Wednesday with a knee injury.Justin McCray appears to have taken over the right guard spot after starter Byron Bell (knee) went on injured reserve Wednesday. McCray started last week. Another backup, Lucas Patrick, started at left guard for Lane Taylor, who has a foot injury.

The results for Green Bay's backup-littered line were encouraging last week against Atlanta in a victory that snapped a three-game losing streak and kept slim playoff hopes alive.

After allowing four sacks in the first half, the Packers (5-7-1) didn't allow one the rest of the game. Aaron Rodgers and the offense were effective throwing quick, short passes in winning Joe Philbin's debut as interim head coach and offensive play caller.

"I wouldn't say the concepts were basic, but I thought the flow was really good," Rodgers said. "Joe did a great job. The communication was great on the sideline and the flow was good and kind of got into a rhythm."

Philbin has made it a point to mostly stick to the same routines the Packers had under fired predecessor Mike McCarthy. While it's difficult to go through a coaching change, players have said that they appreciate the relatively smooth transition.

"I mean, he kind of fit into the role pretty seamlessly," left tackle David Bakhtiari said. "He's done a great job adding his spin to it, yet keeping kind of the integrity of the schedule, so it's not completely different after having guys who were used to something for so long."So overall it's been pretty fluid, even in the first week," he added.

There is no sense changing things up so dramatically when it will be a tough enough task to hold off the Bears.

The Packers, though, do have an intangible going into Sunday that the Rams lacked: Green Bay has won eight straight at Soldier Field. The run started with Green Bay's victory in the NFC title game on Jan. 23, 2011.

There's also a confidence boost that comes with the Packers' stirring rally in the season opener in September, scoring 21 points in the fourth quarter for a 24-23 win over Chicago.

The game marked Mack's debut with the Bears following his trade from the Oakland Raiders.

Rodgers returned at halftime from a left knee injury to add to the drama The Packers went no-huddle in the second half of that game, though Rodgers stayed primarily in the pocket. It was the Packers' offense at its best.

Rodgers is healthier now with the ability to scramble out of trouble again. Mack, who has 10 sacks and six forced fumbles, has the benefit playing nearly an entire season in the Bears' scheme. The linebacker has been mainly lining up on the right side of the defense in recent weeks, though he can easily switch sides.

Respect Mack and be prepared. But don't get caught up in the star power, Spriggs said.

"You can't go out there and be like you're blocking God," Spriggs said. "But at the same time, you give respect where respect's due."