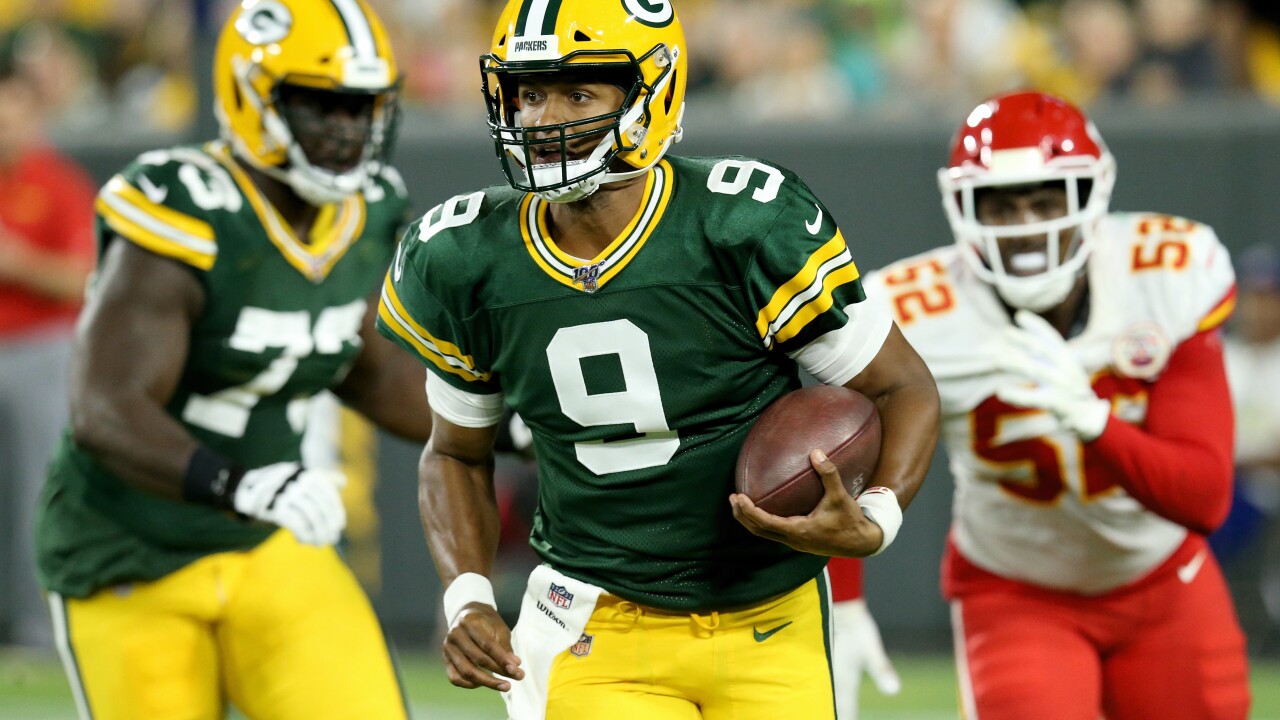 GREEN BAY (AP) — One play stood out during the Packers' 27-20 win over the Chiefs on Thursday night in the teams' preseason finale. It happened on a dead ball in the fourth quarter.

After Packers running back Dexter Williams scored the deciding touchdown with 6:24 to play and Sam Ficken nailed the PAT, a fan raced onto the field as the two teams prepared for the ensuing kickoff. The fan ran about the length of the field and managed to take off his shirt before Kansas City safety Harold Jones-Quartey planted him at the 25-yard line.

The tackle earned the loudest cheer from the crowd of 73,803.

As for the game, Green Bay backup quarterback DeShone Kizer, with Aaron Rodgers looking on from the sideline, rebounded from a costly interception to finish with 77 yards and a touchdown on 8-of-15 passing.

Williams added 34 yards and a score on the ground for Green Bay, which opens the regular season Sept. 5 at rival Chicago.

The Chiefs, with reigning MVP Patrick Mahomes on the bench, were led by backup Kyle Shurmur. The undrafted rookie out of Vanderbilt went 14 for 20 with 143 yards through the air and a touchdown.

The Chiefs got on the board first on a 28-yard field goal by Harrison Butker with about five minutes to play in the first quarter. Butker capped a 17-play, 80-yard drive led by Shurmur.

The Packers' offense — with backup Tim Boyle getting the start behind center and QB coach Luke Getsy handling the play-calling duties — punted on its first two possessions. But Green Bay linebacker Ty Summers made his case for a roster spot by picking off Shurmur and returning it 74 yards for a score to put the Packers ahead 6-3. Mason Crosby missed the PAT.

Green Bay increased its lead to 13-3 on a 2-yard pass from Boyle to Jace Sternberger. Boyle finished 3 for 6 with 18 yards and the score.

Kizer got his shot to make his case to be Rodgers' backup and promptly was intercepted by safety Jordan Lucas. The turnover gave the Chiefs the ball at the Packers' 7-yard line. That led to a 2-yard touchdown pass from Shurmur to receiver Jordy Fortson, who made up for an unsportsmanlike conduct penalty earlier in the quarter. The Chiefs pulled within 13-10 with 3:43 to go in the first half.

Kizer rebounded on the following drive, leading Green Bay on a 12-play, 81-yard march and capping it with a 1-yard touchdown pass to Evan Baylis. The Packers led 20-10 at intermission.

Chase Litton got the start in the second half and immediately led the Chiefs on a 16-play, 68-yard scoring drive. Litton found tight end Nick Keizer for a 4-yard TD.

Litton finished with 62 yards and the score on 11-of-19 passing.

After Darrius Shepherd fumbled the ensuing kickoff return, Butker knotted the score at 20 just before the end of the third period.

Both teams have until 3 p.m. Saturday to trim their rosters to 53 players.

Guard Kahlil McKenzie started the second half for the Chiefs. McKenzie was born in Green Bay and played at Green Bay Southwest High School. McKenzie's father, Reggie, worked as the director of player personnel for the Packers.

Packers: Sternberger was carted off to the locker room just before halftime. ... ILB James Crawford exited the game in the third quarter.

Chiefs: Kansas City signed QB Matt Moore earlier this week. The 10-year veteran last suited up in 2017, when he played in four games for the Dolphins, including two starts. The 35-year-old Moore completed more than 61% of his passes in 2017 for 861 yards, four touchdowns and five interceptions. Moore played his last seven seasons with Miami after spending the beginning of his career in Carolina.

Packers: Green Bay agreed to trade OLB Reggie Gilbert to the Titans for a conditional 2020 draft pick. The move is pending a physical. Gilbert played all 16 games for the Packers last season and had 15 quarterback pressures to rank second on the team. The 26-year-old former undrafted free agent from Arizona had spent most of his first two seasons on Green Bay's practice squad before his breakthrough last year. ... The Packers signed G Dejon Allen. The 6-foot-2, 300-pound Allen went undrafted from Hawaii in 2018 and spent the entire 2018 season on the Bears' practice squad.

Chiefs: open the regular season at Jacksonville on Sept. 8.