Packers Nation had the rare opportunity to get up close and personal with Brett Favre in Green Bay Thursday.

Favre attended a "Chalk Talk" charity event to raise funds for Rawhide, a charity serving at-risk youth started by Bart Starr in the 1960s when he was a Packers quarterback.

Starr's wife, Cherry, spoke at the event and said Bart was saving up his energy for the halftime ceremony Thanksgiving Night when his jersey will be retired.

"Bart and Brett have had such an admiration for each other, respect and love," Cherry Starr told TODAY's TMJ4. "He was the inspiration. We said, 'We're gonna have you ready to go to Green Bay to have you walk out on the field with Brett because he wants you there.'"

In a one-on-one interview on stage, Favre was candid about his career with the Packers and the controversial tour of duties he spent the rival Minnesota Vikings and the New York Jets.

He said he definitely wanted to beat the Packers when he played against them in Green Bay, but still had mixed emotions. 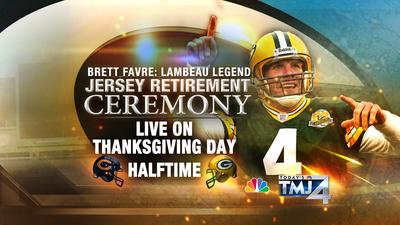 Favre said he hadn't started thinking about the Thanksgiving night ceremony until the last couple of days.

"I never dreamed of retiring my jersey or the Hall of Fame. I dreamed of playing," Favre said.

"When I think about it, I think about how much of an honor it is to play in a Packer uniform, but to have my jersey enshrined ... what an honor."

Favre admits he misses the game, but it's not about the actual action on the field.

"Not necessarily the games, but plane rides, bus rides, TV time outs, picking on coaches. We just had a lot of fun," Favre said.

Favre had glowing praise for current Packers quarterback Aaron Rodgers, saying he "was never as good as him."

"He's almost too good, but with all due respect, it's like 'crap, why doesn't he make a mistake out there? All my good records he's going to take and I'll keep all the bad ones,'" Favre joked.

"You really know a guy is great when he can carry his team and the rest of the guys are just OK."

Bart and Cherry Starr received the key to the city of Green Bay from the mayor.

After seven years apart from the Packers, Favre and his old team had a happy reunion in July when he was inducted into the Packers Hall of Fame.

On Thanksgiving night, Favre will join Starr, Tony Canadeo, Don Hutson, Ray Nitschke and Reggie White in having his No. 4 uniform number retired.

Getting my morning run in here in Green Bay prior to today's ceremony. My favorite pair of blue jeans beat out the suit...