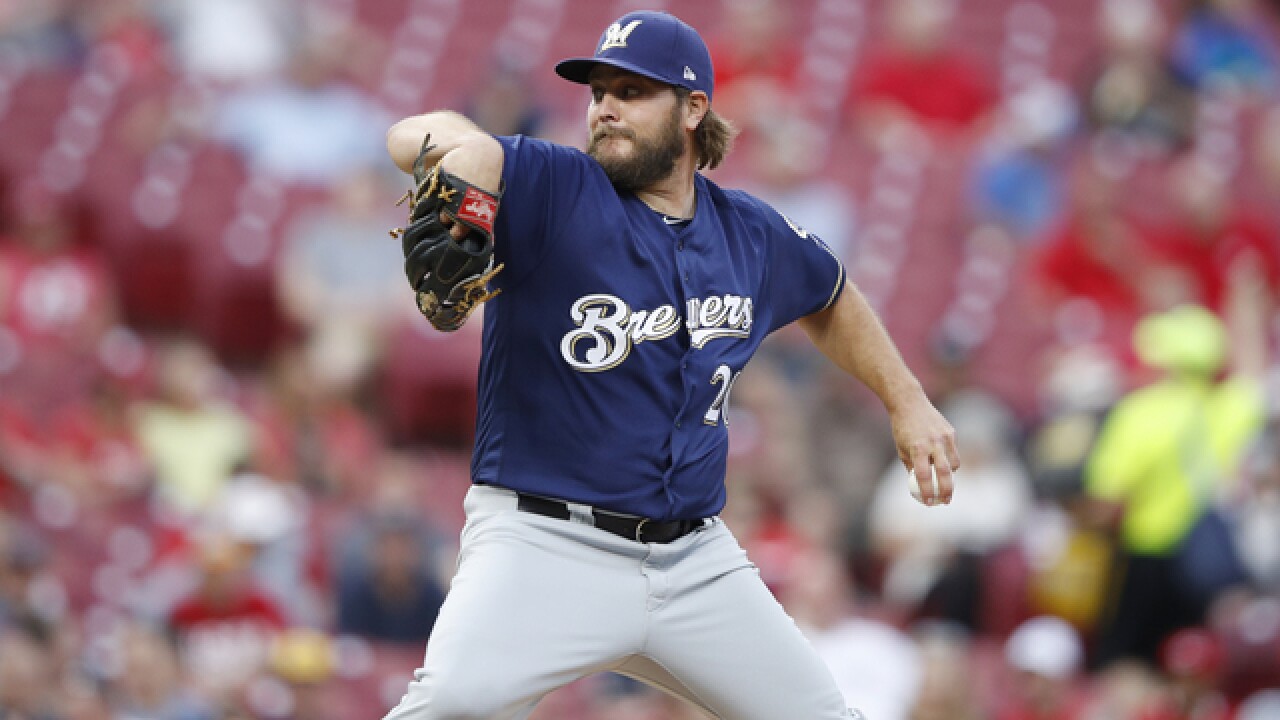 Copyright 2018 Scripps Media, Inc. All rights reserved. This material may not be published, broadcast, rewritten, or redistributed.
Joe Robbins
CINCINNATI, OH - MAY 02: Wade Miley #20 of the Milwaukee Brewers pitches in the second inning of a game against the Cincinnati Reds at Great American Ball Park on May 2, 2018 in Cincinnati, Ohio. (Photo by Joe Robbins/Getty Images)

During his final warm-up start with the Brewers this spring, Wade Miley felt a twinge in his groin. It was an ill-timed strain that threatened to jeopardize his chances of making an MLB roster in 2018, and after a month filled with hope of making the Brewers opening day roster, Miley was faced with a wall of doubt.

It’s unbelievable,” Miley said in March. “I feel like I’ve thrown the ball well this spring and now this happens. That’s why it’s so frustrating.”

The next day, the Brewers and Miley were set to decide on his major league option. Miley was hopeful, but uncertain.

"If you think business side, I wouldn't put a hurt guy on the roster," Miley said in March. "We have to get through stuff like that."

Eventually, the two sides did work something out. Miley didn't want to cut ties with a team he'd impressed in the spring and start over. So, he accepted a $100,000 retention bonus and remained on a minor league contract to rehab his injury.

Slowly, the veteran lefty worked his way back, and in his final start in AA Biloxi, he threw six innings, struck out 11 and allowed just two hits.

The Brewers saw all they needed to see--and in an effort to bolster a starting rotation that's faced plenty of ups and downs--they moved Brent Suter over and gave him a chance.

In his season debut against the Reds Wednesday, he certainly didn't disappoint.

Though he faced a few jams in the third and fourth innings, allowing Devin Mesoraco to lace a RBI double, he retired six straight to leave the Brewers with a 2-1 lead heading into the seventh.

Miley, one of only three left-handers on the Brewers, and the only one in the starting rotation, could be an important piece in a group built up by a strong core of high-performing veterans.

Right now, the Brewers best have been Jhoulys Chacin and Junior Guerra, a sentence that certainly makes a few folks cringe, but it's working--so, it's hard to argue with results a NL central division lead.

Over the course of his career, the 31-year-old Miley had thrown 1,155 innings to a 4.38 ERA. Last season, he worked 157 innings for the Baltimore Orioles to the tune of a 5.61 ERA. It was the worst full season ERA of his career.