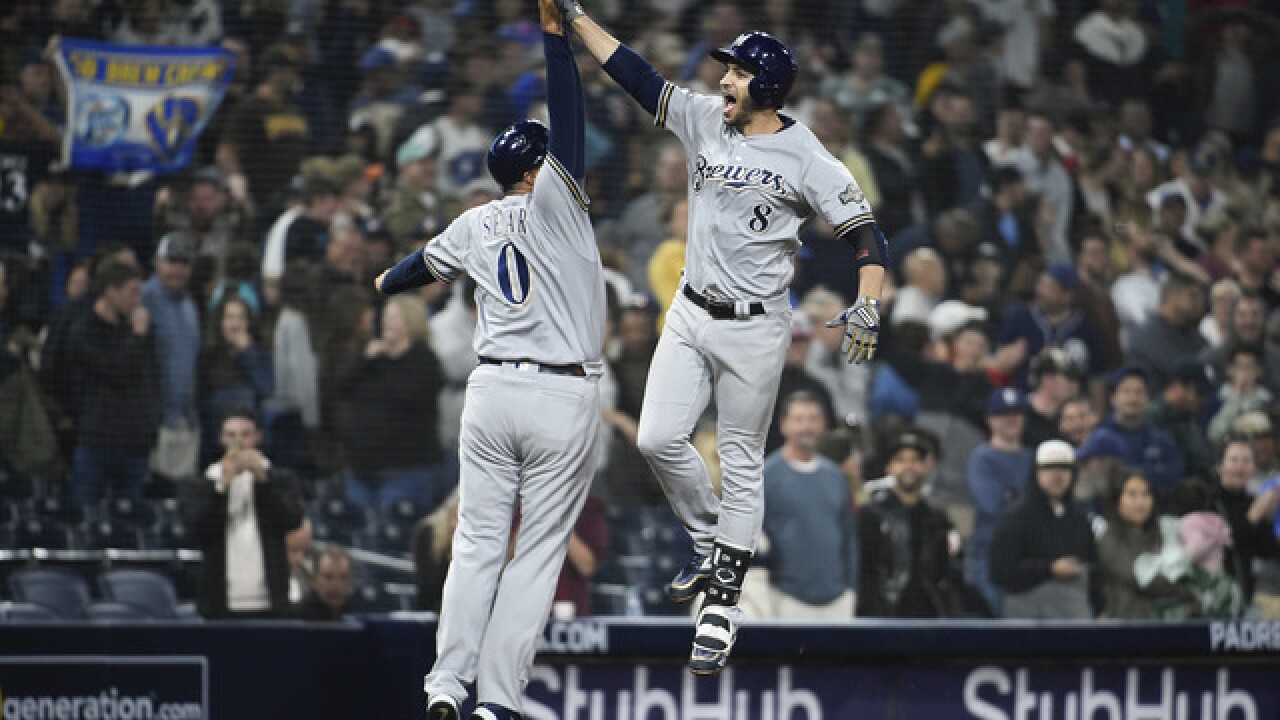 Copyright 2018 Scripps Media, Inc. All rights reserved. This material may not be published, broadcast, rewritten, or redistributed.
Denis Poroy
SAN DIEGO, CA - MARCH 30: Ryan Braun #8 of the Milwaukee Brewers is congratulated by Ed Sedar #0 after hitting a three-run home run during the ninth inning of a baseball game against the San Diego Padres at PETCO Park on March 30, 2018 in San Diego, California. (Photo by Denis Poroy/Getty Images)

Though the Brewers made a few big offseason splashes, signing Lorenzo Cain and trading for Christian Yelich, they're still contending in a top-heavy NL Central featuring the dominant Chicago Cubs and potentially dangerous St. Louis Cardinals.

On the back of a strong offense, the Brewers could certainly make a run and mirror last year's club that won 86 games and contended for a division crown, or thanks to a lack of depth on the mound, they could fall victim to the long slog of a 162 game season and come up short of the playoffs for the seventh straight year.

ESPN polled 29 of their experts. 28 picked the Cubs to win the division, and one, Sarah Langs, picked the Brewers.

"The Brewers were in it last year -- their 69 days spent in first place in the NL Central were the most of any team in any division to miss the playoffs," she said. "They got better in the offseason, notably adding Christian Yelich and Lorenzo Cain. They’ll be competing with a Cubs team that’s pretty similar to 2017."

Chad Thornburg said the Brewers are in the mix to make October, but they will come up short to the Cardinals and Diamondbacks in the Wild Card race.

Bill Simmons' site had each of their staff writers make division and Wild Card picks, and only one of seven the writers, Michael Baumann, selected the Brewers to make the postseason.

Instead of the Brewers, some writers picked the Phillies and Mets, but even more surprising than that, Michael Baumann loves the 2018 Brewers so much, he predicted Lorenzo Cain would win the NL MVP.

On the other side of things, Glicksman predicted the Brewers to be the biggest disappointment in MLB citing regression years for both Chase Anderson and Travis Shaw.

But, Mallory Rubin predicts the Brewers to surprise MLB and challenge opponents behind their potent lineup.

The USA Today staff, each made their own predictions for division winners, and similar to the Ringer, only two of the seven writers polled picked the Brewers to make the postseason.

The only Brewer believers are Steve Gardner and Gabe Lacques, who say the crew will snag the second Wild Card spot.

The betting site has the Brewers sitting at +525 odds to win the NL Central, third best in the division. The Cubs are listed at -275 and the Cardinals are at +375. So, if you put some money down on the Brewers right now and they pull it off, you'll get a solid return on investment.

A full staff of seven predictions, the Brewers finally got a majority of writers to Jon Tayler, Michael Beller, Connor Grossman, and Gabriel Baumgaertner all predicted the Brewers to make the playoffs.

Grossman even predicted the Brewers to make the NLCS, ultimately losing to the Cubs.

As for awards, Stephanie Apstein predicted Christian Yelich as a dark horse for the NL MVP, and three writers, Jack Dickey, Grossman, and Baumgaertner all predicted Craig Counsell would win manager of the year.

Some other bold predictions, Ben Reiter said the Brewers would be the biggest flop of 2018 and Michael Beller said the Brewers, A's and Phillies would pull off a three-team trade featuring Ryan Braun and Jake Arrieta.

They predict the Brewers to finish third in the NL Central behind the second place Cubs and first place Cardinals. They are the only site to predict someone other than the Cubs to win the division.

They cite the Brewers "scary" rotation as a reason they won't win the division.