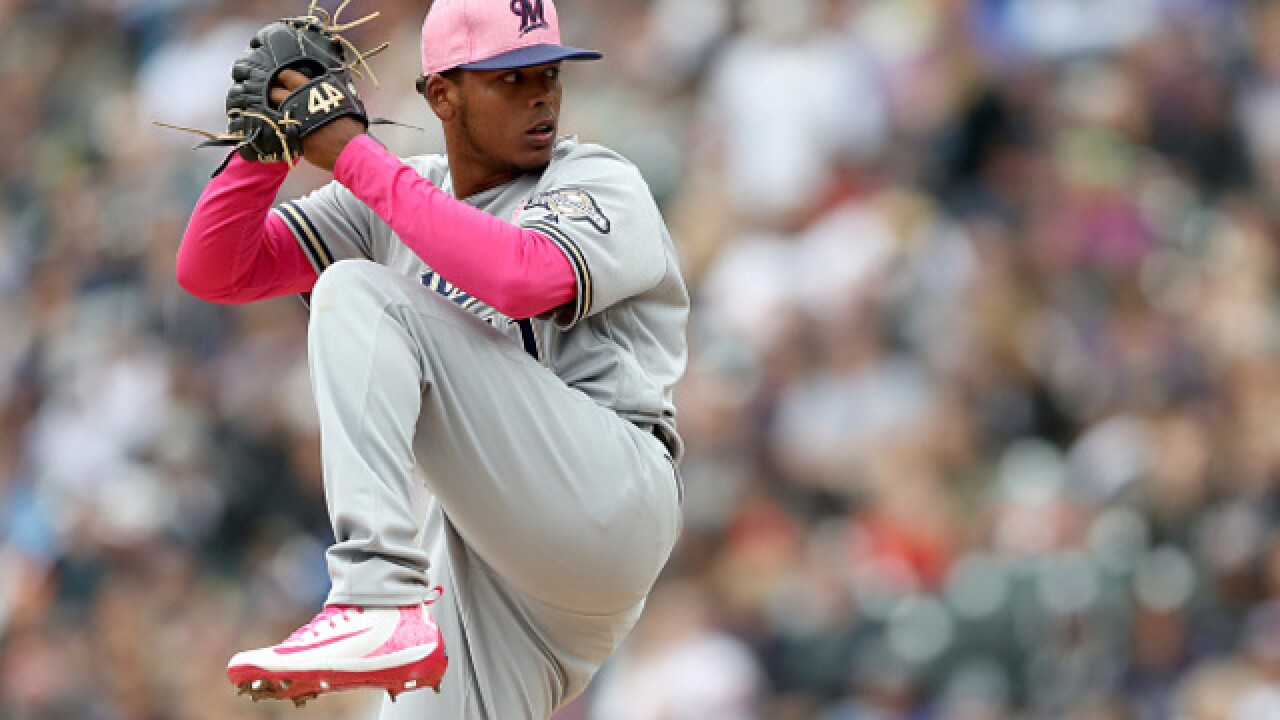 Image copyright 2018 Getty Images. All rights reserved. This material may not be published, broadcast, rewritten, or redistributed.
Matthew Stockman

Young Freddy made sure they were tears of joy.

Peralta took a no-hit bid into the sixth inning of his first big league start and set a Milwaukee rookie record with 13 strikeouts, leading the Brewers over the Colorado Rockies 7-3 on Sunday.

It became a memorable Mother's Day for Pedro, Peralta's mother, Octavia, and his girlfriend, Maritza, who came to Colorado expecting to watch him pitch professionally for the first time at Triple-A Colorado Springs. But a stomach illness forced Chase Anderson to miss his Saturday start against the Rockies, and Peralta's start for the Sky Sox was scratched so he could pitch for the Brewers on Sunday.

"I know he cries a lot," Peralta said. "Like (Saturday), when I told him what was going on, he started crying."

A 21-year-old right-hander who was 5-1 this season at Colorado Springs, Peralta (1-0) didn't allow a hit until David Dahl hit a sharp single to center with one out in the sixth. Peralta froze Charlie Blackmon on a 92 mph fastball for a called third strike and was replaced by Matt Albers.

As he walked off the mound, the enormity of the moment nearly overcame him.

His 13 strikeouts are the fourth-most in major league debuts and the most since Washington's Stephen Strasburg had 14 on June 8, 2010, according to the Brewers.

"He got his emotions out in the first three pitches and kept getting better," Milwaukee manager Craig Counsell said. "You could see by the swings they weren't comfortable with the fastball."

Peralta struck out Nolan Arenado, Carlos Gonzalez and Trevor Story in order in both the second and fourth innings. Colorado loaded the bases in the third on a fielding error by third baseman Travis Shaw and two walks before Blackmon grounded out.

"His stuff was on point tonight," Colorado's Tony Wolters said. "I swung at some pitches and I'm like, 'Why didn't I hit that?' It just keeps cutting. Yeah, he's a good pitcher."

Shaw and Jesus Aguilar homered for the Brewers, who opened a 7-0 lead by the sixth.

Tyler Saladino's RBI double and Christian Yelich's two-run single built a three-run lead in the second, Shaw made it 4-0 in the third with his ninth homer, and Aguilar hit a three-run homer against Harrison Musgrave in the sixth.

Wolters homered in the seventh against Albers, and Dahl hit a two-run drive in the eighth off Dan Jennings.