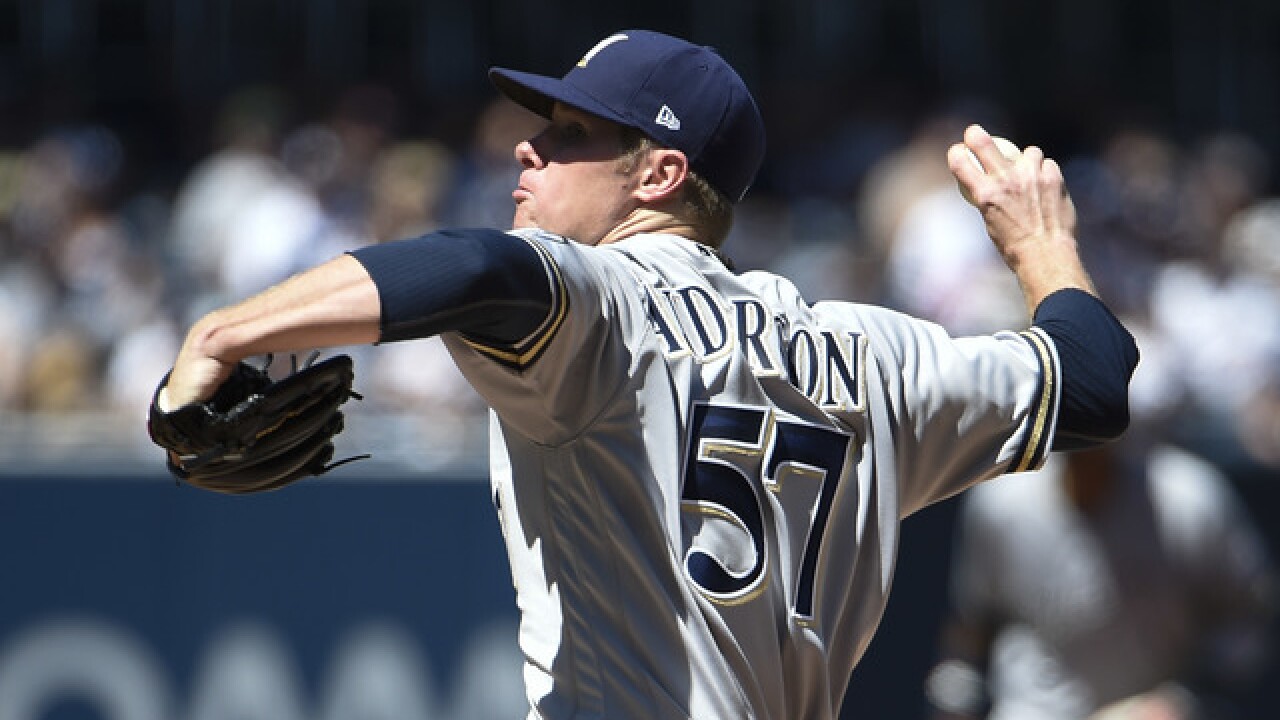 Copyright 2018 Scripps Media, Inc. All rights reserved. This material may not be published, broadcast, rewritten, or redistributed.
Denis Poroy
SAN DIEGO, CA - MARCH 29: Chase Anderson #57 of the Milwaukee Brewers pitches during the first inning on Opening Day against the San Diego Padres at PETCO Park on March 29, 2018 in San Diego, California. (Photo by Denis Poroy/Getty Images)

Heading into the 2018 season, the Brewers have solid organizational depth on offense and the ability to compete in a top heavy NL central strong-armed by the Chicago Cubs.

But there are still plenty of questions facing this team that could make them go one of two ways: Make a good run at the division and make the playoffs, or falter down the stretch and come up short of the postseason for the seventh straight year.

Here are five questions heading into 2018 that will decide the fate of the Brewers:

Heading into his final start of 2017, Jimmy Nelson was on cloud nine. He was finishing up the best campaign of his career, throwing 175 innings to a 3.49 ERA and nearly halving his BB/9 from last season.

Baseball has a way of leveling the playing field, and Nelson, while diving back into first base on a pick-off move, partially tore his labrum and strained his rotator cuff in his right shoulder and faced an offseason of uncertainty.

Nelson's return date has been projected to be anywhere from mid-April to the All-Star break, but when he comes back, he will be a crucial piece to a rotation that definitely needs him.

Nelson, who finished 9th in the 2017 Cy Young voting and struck out 199 batters, would give the rotation a top-end piece that could act as a stopper down the stretch and come playoff time.

2: Will the team make a trade?

With Keon Broxton and Maverick Phillips sitting down in AAA and collecting dust, and the Brewers pitching staff lacking quality depth, and a trade between Milwaukee and an outfield hungry team could certainly be in the cards.

The Brewers could certainly use a top of the rotation piece, but the only problem would be price point.

Outside of Domingo Santana, Broxton and Phillips, the Brewers don't have too much to offer in terms of quality prospects. According to MLB.com's top prospects list, they don't have a single player in the top 100.

That might make someone like Chris Archer of the Tampa Bay Rays of Zach Britton of the Baltimore Orioles unobtainable.

But there are some cheaper relief names like Brad Hand of the San Diego Padres, Brad Brach of the Orioles and Brad Ziegler of the Miami Marlins still on the table.

And in the current MLB climate, where relief help is valued almost as highly as starting pitching depth come playoffs time, those names could be a big difference down the stretch.

This has been a question for the last three years, and though it's certainly been hashed out at this point, it's still a valid question for this club.

It was already mentioned how deep the outfield is, and Braun, despite his lack of trade mobility to a trade clause where he'll likely only accept a trade to Los Angeles or Anaheim, could be a candidate to ship off come July.

If Braun remains staunch about going out west, which it appears he is, then the current state of the Dodgers and Angels wouldn't condone a trade.

The Dodgers have Yasiel Puig, Matt Kemp, Joc Pederson, Chris Taylor and Kike Hernandez all roaming their outfield, with Andrew Toles waiting in the wings. Plus, they turned down trading for Giancarlo Stanton so they could ease the pressure on their already log-jammed payroll.

With Braun's swelled salary, and the Dodgers having plenty of outfield talent to spare, it doesn't seem like a good match outside of a large rash of injuries cropping up in LA.

In terms of Anaheim, they already feature the best outfielder in the world, Mike Trout, and spent a pretty penny to lock up Justin Upton this offseason. Adding Braun to play the other corner when they already have Kole Calhoun the potential of Shohei Ohtani doesn't make much sense.

The Brewers have gone through a steady diet of closers over the last few years with Neftali Feliz, Jeremy Jeffress, Tyler Thornburg, and Francisco Rodriguez all getting their turn in the back end of the pen at some point over the last three seasons.

Knebel has been with the club since 2015, but exploded onto the scene last year after nailing down an All-star nomination, collecting 126 strikeouts and setting the MLB all-time record with 45 straight games with a strikeout.

But in baseball, closers can be finicky. Just look at the bearded Brian Wilson who went from a three-time All-Star at the top of his game in 2011 to only saving two more games over the rest of his career after that season.

Knebel will need to remain his dominant self in 2018 if the Brewers want to avoid shopping for back-end bullpen help come July.

Cain is coming off the first season in his career in which he played over 140 games. A big deal for a player who suffered through injury after injury in 2016 and only managed 103 games.

Cain is inching on 32 years old and locked into a five year deal in Milwaukee. As he ages, his health will certainly be an issue--especially considering how much his speed aids his game in terms of fielding.

While the Brewers feature plenty of offensive depth in the outfield, they'd certainly love not to have to worry about Cain missing an extended period of time this season.