If your college doesn't require the ACT or SAT, should you still take it? 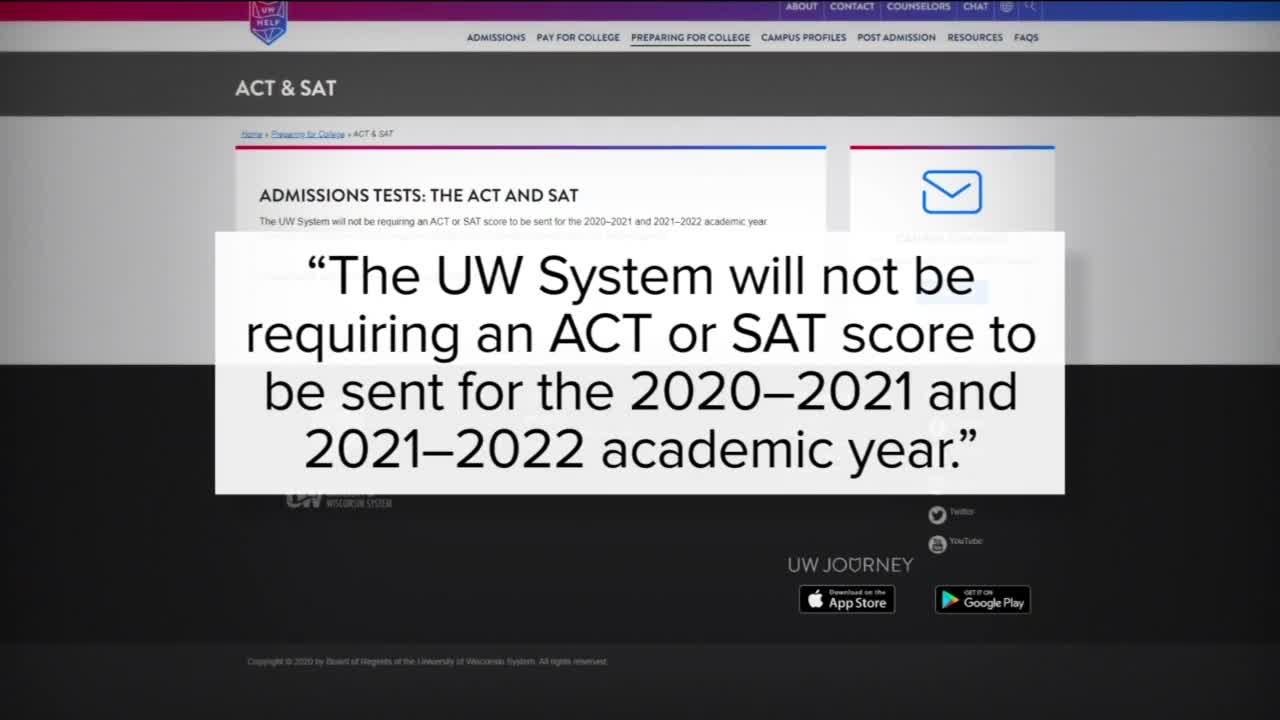 As students manage the stress of preparing for college, standardized testing may look different for the upcoming school year.

BRISTOL — The cloud of COVID-19 is still hovering over standardized testing for incoming college students. The spring SAT exams and the June test was canceled. The ACT was also forced to close some test sites.

Teens like Madeline Slutsky of Bristol quickly realized their testing opportunities wouldn't be the same. TMJ4 News spoke with her mom, Erin.

"She was looking forward to taking it again, and then, COVID hit," Erin Slutsky said.

The 17-year-old took the ACT in early March. She wanted to improve her score, but because she has dyslexia, she needed to take her test a certain way.

"My daughter also has accommodations. So, she needs someone that is going to read the test to her, which is not an option this time around," Slutsky explained.

With UW-Madison being the exception, the UW system announced it won't require an ACT or SAT score for this academic year and next. Ivy leagues like Harvard and Cornell also waived the test requirements.

TMJ4 News interviewed a spokesperson for a national learning platform called Varsity Tutors and asked why students should prepare for these exams if, in some cases, they aren't required.

The company's website offers free live online classes to help teens prep for the ACT and SAT. He says you can also go straight to their websites for practice problems.

"You're never going to go wrong by doing a little bit of math by hand, doing some summer reading, some of those skills that are evergreen for standardized tests," Galvin said.

For those who have learning differences, Varsity Tutors, and other learning and test prep agencies have teams dedicated to helping.

"It's a bigger deal for her. She wants to get the highest score that she can," said Erin Slutsky.

"We understand that this is not an accurate measure of her ability to succeed in college," she continued.

As it stands now, the SAT and ACT will be offering in-person testing in fall. You'll likely be screened for COVID-19 and they encourage you to wear a mask. If you aren't comfortable, you can request refunds.

Here are the refund links for each test: SAT or ACT.