Clake and Black head back to trial on Monday

Former Milwaukee Sheriff David Clarke is heading back to court for his now infamous run-in with 25-year-old Daniel Black, who shook his head at Clarke while boarding a flight early last year.

Black sued the sheriff for having deputies detain him and question him at Milwaukee's airport, but Clarke's taunting social media posts remain the focus of the case. Here's a look at history of the case and the legal issues that will play out in federal court. The trial starts Monday.

Clarke and Black were boarding a flight from Dallas to Milwaukee on Jan. 15, 2017 -- the day Clarke's beloved Dallas Cowboys were facing the Green Bay Packers in the playoffs. The sheriff was clad in Dallas gear without his trademark cowboy hat and Black said he didn't immediately recognize him because of that. 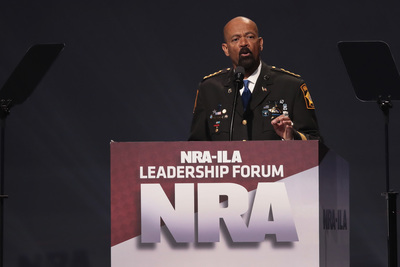 He asked Clarke if he was Milwaukee's sheriff, according to his lawsuit, and when Clarke said yes, Black shook his head disapprovingly.

Black said he made the gesture because Clarke was supporting a rival team. Clarke, who attracts controversy because of his provocative and brash personality, didn't see the gesture as harmless and asked deputies to meet Black at the airport and question him.

Black said deputies questioned him for about 15 minutes but didn't cite or arrest him. When Black publicized the encounter and filed his lawsuit, Clarke responded with a series of Facebook posts.

Clarke said at the time he "reserves the reasonable right to pre-empt a possible assault," and also posted that the next time someone pulled the same "stunt on a plane they may get knocked out." Later, making fun of Black, Clarke wrote on Facebook: "Cheer up, snowflake ... if Sheriff Clarke were to really harass you, you wouldn't be around to whine about it."

WHERE THE LAWSUIT STANDS

Black's lawsuit initially made several claims. He contended that Clarke's directive for his deputies to detain him amounted to unconstitutional search and seizure, and that the sheriff's actions violated his due-process rights and infringed on his free speech.

But earlier this month, Judge J.P. Stadtmueller dismissed all but one of Black's claims -- whether Clarke's Facebook posts were threatening enough to be considered a deterrent to future speech.

Stadtmueller said the posts could be interpreted in different ways: On one hand, the posts could be seen as "intentionally hyperbolic (and juvenile) attempts at mockery and self-promotion" and not intimidating. But, he also said "the Court cannot say Clarke's posts were so trivial that no jury could find them to be sufficiently threatening."

The trial is expected to last all day Monday. While Black is likely to testify, it's less clear whether Clarke will take the stand.

Black wants a jury to award him a compensation amount that they choose for emotional distress and other damages, as well as attorneys' fees.

Although Clarke is no longer sheriff, the county is paying his legal bills and ultimately will be liable for any damages. Clarke resigned Aug. 31 to join a political action committee that supports President Donald Trump.