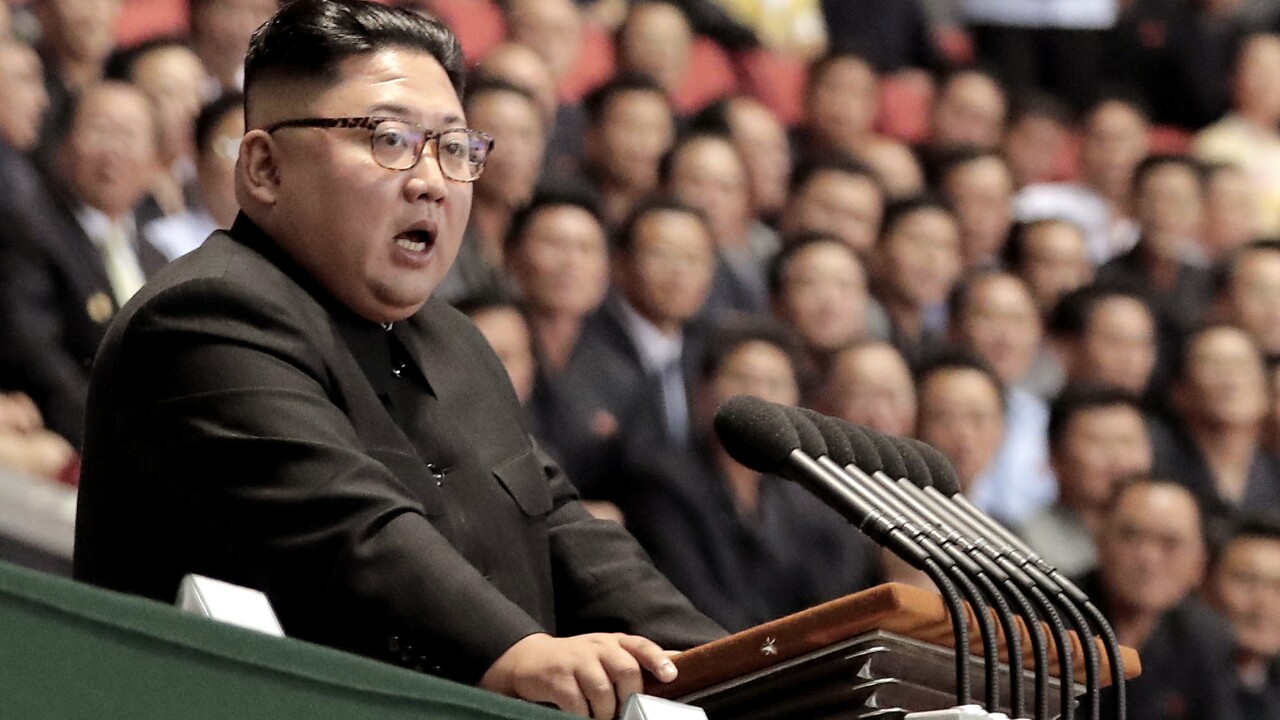 Pool/Getty Images
PYONGYANG, NORTH KOREA - SEPTEMBER 19: (EDITORIAL USE ONLY, NO COMMERCIAL USE) North Korean leader Kim Jong Un speaks after watch the gymnastic and artistic performance at the May Day Stadium on September 19, 2018 in Pyongyang, North Korea. Kim and Moon meet for the Inter-Korean summit talks after the 1945 division of the peninsula, where they will discuss ways to denuclearize the Korean Peninsula. (Photo by Pyeongyang Press Corps/Pool/Getty Images)

(CNN) -- North Korea will not relinquish its nuclear weapons until the US eliminates its own "nuclear threat," according to a commentary published by state-run Korean Central News Agency (KCNA).

"The proper definition of denuclearization of the Korean Peninsula is completely eliminating the American nuclear threat to North Korea before eliminating our nuclear capability," the commentary says.

The US and North Korea are deadlocked in negotiations over how North Korea will denuclearize in return for the easing of sanctions.

On June 12 in Singapore, North Korean leader Kim Jong Un and US President Donald Trump signed a vaguely worded pledge to "work toward complete denuclearization of the Korean Peninsula." However, in the six months since, talks have stalled and North Korean criticism of the US has sharpened, though Pyongyang has continued to heap praise on Trump.

The commentary published Thursday suggests one obstacle in the negotiations could be US military assets based in South Korea and the protection of South Korea under the US nuclear umbrella.

"When talking about the Korean peninsula, it encompasses not only our republic's territory but also South Korea where the American nuclear weapons and armed forces for invasion are spread out. When talking about denuclearization of the Korean peninsula, [the US] needs to know that it means eliminating all nuclear threat factors," the commentary says.

The statement also says the US push toward the total denuclearization of the Korean Peninsula should include the removal of nuclear threats from "not only the North and the South, but from all neighboring areas."

North Korea has repeatedly refused US calls for it to unilaterally denuclearize, branding Washington's demands a "delusion."

The commentary states that if North Korea gives up its nuclear weapons, rather than lead to denuclearization it would render North Korea a "defenseless state" where the "balance in nuclear strategic strength is destroyed" and the "crisis of a nuclear war is brought forth."

KCNA instead called on the US to implement the measures that North Korea has asked of Washington, which it said would not be difficult to "commit to and carry out." These actions include ending the US' "hostile policies" toward North Korea and halting "unjust sanctions."

"It is obvious that denuclearization of the Korean Peninsula is a joint business that cannot be achieved unless both Korea and the United States strive tougher," the commentary states.

However, Trump and Secretary of State Mike Pompeo have rejected calls from China, Russia and North Korea itself for the US to lift sanctions on the isolated state until further progress is made toward denuclearization on the Korean Peninsula.

It has also rejected suggestions it intends to reduce its military presence in the region as part of any deal with Pyongyang. Despite this, Trump announced in June that he intends to halt large military exercises conducted alongside South Korea in the region.

It is now possible a second summit with Kim will be held in the new year to clarify the exact definition of denuclearization, after Trump stated in early December that one is likely to be scheduled for January or February.

US national security adviser John Bolton also said in early December that a second summit should be held, as North Korea has not lived up to its commitments.

"They have not lived up to the commitments so far," he said at The Wall Street Journal's annual CEO Council conference in Washington. "That's why I think the President thinks that another summit is likely to be productive."

US State Department spokesman Robert Palladino said Tuesday that the US "remains confident" about the push toward denuclearization, and that the US looks forward to the "commitments that Chairman Kim and President Trump have made."