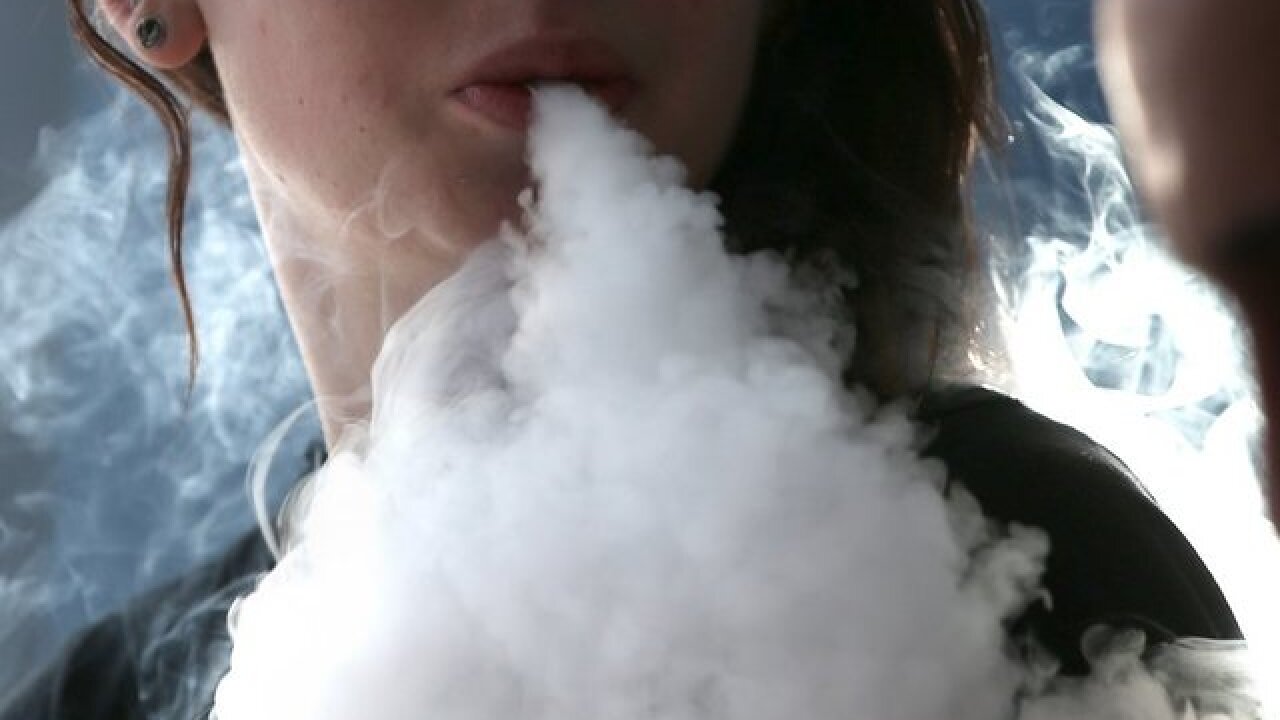 (CNN) -- Vaping increased nearly 80% among high schoolers and 50% among middle schoolers since last year, prompting the US Food and Drug Administration to propose new measures against flavored nicotine products that have propelled the rise, the agency announced Thursday.

"These data shock my conscience," FDA Commissioner Dr. Scott Gottlieb said in a statement, proposing to strengthen the agency's policies against flavored e-cigarette products. These proposals could ultimately prompt their removal from shelves and websites that are accessible to minors.

The proposed changes do not include mint, menthol and tobacco flavors, however. Gottlieb said he wanted to leave the door open for adults who might use these products to quit smoking cigarettes. But that should not mean fueling an "epidemic" of new kids becoming addicted, he added.

"We will not allow that opportunity to come at the expense of addicting a whole new generation of kids to nicotine," Gottlieb said.

He also proposed tightening the reins on products that are marketed or "appealing to youth."

"This could include using popular children's cartoon or animated characters, or names of products favored by kids like brands of candy or soda," the announcement said.

Consumers and health experts have been locked in a contentious debate about vaping: While some see it as a smoking cessation tool for adults, others say there's no good evidence to support this.

"We're committed to utilizing the full range of our regulatory authorities to directly target the places kids are getting these products and address the role flavors and marketing are playing," Gottlieb said.

"We will leave no stone unturned," he said. "This is one of our highest priorities."

One in five high schoolers has vaped in the past month, according to the new numbers announced by the FDA and released in conjunction with the US Centers for Disease Control and Prevention.

"As a father of three young children, I hear daily from parents and teachers worried about the epidemic use of electronic cigarettes and nicotine addiction among kids," Gottlieb said.

Health experts worry these products could put kids' developing brains at risk, get them hooked on nicotine early in life, and be a gateway to smoking and other drugs.

"The data show that kids using e-cigarettes are going to be more likely to try combustible cigarettes later," Gottlieb said. "This is a large pool of future risk."

The new statistics also show that students who vape are doing so more frequently than last year, and they are using flavored liquids more often, according to the FDA. More than a quarter of current users vaped at least 20 of the last 30 days, and over two-thirds had used flavored products.

"Flavors are a major reason they use these products in the first place," Health and Human Services Secretary Alex Azar said in a statement Thursday.

"Flavors increase the likelihood of kids progressing from experimentation to regular use, and a portion of them will go on to use combustible tobacco products, with the huge added dangers of tobacco-related disease."

The new numbers come from a school-based survey, conducted from March to May, which revealed that the number of current users in middle and high school -- meaning those who have vaped in the past 30 days -- increased 48% and 78% from last year, respectively.

In other words, the number of current vapers in middle and high school has jumped by roughly 1.5 million since last year, now totaling 3.6 million kids, Gottlieb said.

The "alarming" surge in adolescent e-cigarette use prompted health officials to release these numbers "earlier than usual" in hopes of spurring immediate action, according to the FDA.

"Not only are we seeing a staggering increase in the number of high schoolers who use e-cigarettes, we're seeing that more and more of them have moved beyond experimentation and are using e-cigarettes almost daily," Dr. Colleen A. Kraft, president of the American Academy of Pediatrics, said in an emailed statement.

The rapid spread of e-cigarettes -- which work by heating a liquid containing nicotine until it vaporizes -- was flagged in a 2016 report by the US Surgeon General that cited a 900% increase in e-cigarette use by high school students from 2011 to 2015. E-cigarette use declined for the first time in 2016 but held steady -- under 12% -- the following year. Now, that number is 20.8%.

"This spike in use threatens to stall or reverse the substantial public health gains we've made by reducing tobacco use overall, and especially among children," Gottlieb said.

Too little, too late?

Health and advocacy groups had mixed responses after news reports last week foreshadowed Thursday's policy-related announcement. While some applauded the proposals, those same organizations also chided the agency for stopping short and not acting sooner.

The proposed policy revision wouldn't apply to vaping products "sold exclusively in age-restricted locations -- for instance, a stand-alone tobacco retailer (such as a vape shop)," the announcement said.

Critics say this could shift the problem out of some storefronts but not out of existence.

"The FDA needs to go further," Matthew L. Myers, president of the Campaign for Tobacco-Free Kids, said in a statement Friday. "There is nothing to prevent the number of vape shops from rapidly expanding and there is no solid evidence that vape shops do a good job of preventing illegal underage sales."

The FDA has cracked down on vape shops in the past, issuing warnings and fines to more than 1,300 retailers for illegally selling vaping products to kids, following an undercover investigation this summer.

Myers urged the FDA to ban all flavored vaping products whose impact on public health hasn't been scrutinized by the FDA "as the law requires ... rather than dealing with them after they have become popular with kids, as in the case of Juul."

Instead of requiring e-cigarettes to undergo FDA approval before they could be sold, the agency decided in 2017 it would allow such products to stay on shelves until 2022 without pre-market review.

This 2017 decision has also been the subject of an ongoing lawsuit against the FDA and HHS, filed in March by health advocacy groups including the American Academy of Pediatrics and the Campaign for Tobacco-Free Kids. The lawsuit seeks to uphold the earlier requirement for pre-market approval.

Under Gottlieb's latest proposal, the FDA's less-stringent approach would no longer apply to flavored products whose companies don't take these steps to avoid underage use.

"We hope that within the next 90 days, manufacturers will choose to remove flavored [e-cigarette] products from stores where kids can access them and from online sites that do not have sufficiently robust age-verification procedures," Gottlieb said.

"I'm deeply concerned about the availability of menthol-flavored cigarettes," Gottlieb said Thursday. "I believe these menthol-flavored products represent one of the most common and pernicious routes by which kids initiate on combustible cigarettes.

On Wednesday, the NAACP released a statement in support of the FDA's then-anticipated plan to ban menthol cigarettes, saying that "the tobacco industry has successfully and intentionally marketed mentholated cigarettes to African Americans."

Nearly one in five African Americans smoked menthols in 2010, representing more than 80% of black smokers, according to the National Survey on Drug Use and Health.

Citing their popularity among African Americans and youth, National Urban League CEO and President Marc H. Morial urged the FDA "to move forward with urgency to implement this plan" in a statement Tuesday.

"The destructive impact of menthol cigarettes on the African-American community is clear," Morial said.

The agency has made a number of moves in recent months to counter vaping among kids, beyond warning and fining retailers for illegally selling e-cig products to kids.

The agency recently expanded its investigation into e-cigarette companies, sending letters to 21 companies last month in an effort to uncover whether they are marketing products illegally and outside the agency's compliance policy.

That move came less than two weeks after the agency conducted a surprise inspection of Juul's corporate headquarters in San Francisco, seizing thousands of documents, many of which relate to its sales and marketing practices.

Earlier this month, Gottlieb announced a public hearing in December that will "focus on the potential role of drug therapies to support cessation among youth."

Gottlieb has previously met with companies like Juul, asking them to to address what he described as a mutual goal to keep e-cigs out of kids' hands. But some have been critical of these efforts, with one anti-tobacco advocate comparing them to "asking the fox to recommend plans for guarding the hen house."

The FDA's latest announcement comes two days after the leading maker of e-cigarettes, Juul, vowed on Tuesday to halt most retail sales of flavor products while restricting flavor sales to adults 21 and older on its secure website. The company also announced it was shutting down some of its social media accounts.

Altria Group, the parent company of Philip Morris, also recently announced that it was pulling a number of flavored vaping products from shelves until it receives FDA authorization or "when the youth issue is addressed," according to a statement by company Chairman and CEO Howard Willard.