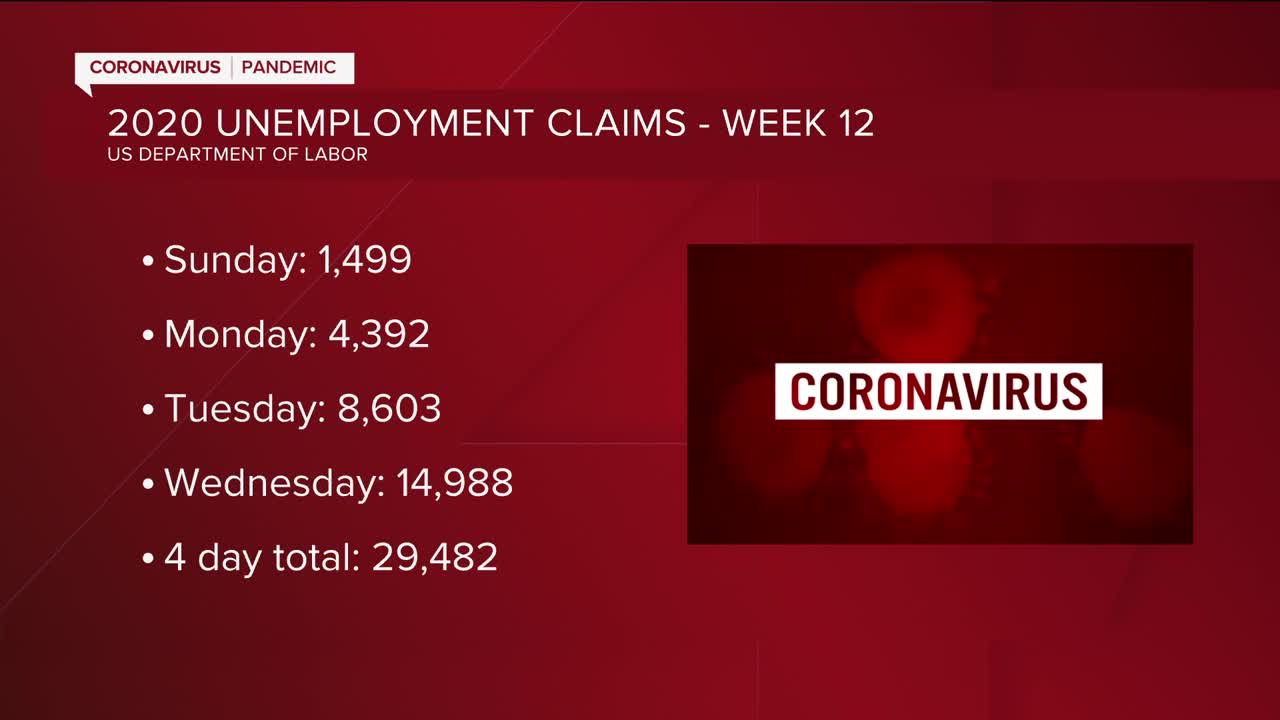 Preliminary unemployment claims are rising very fast in Wisconsin due to coronavirus pandemic.

SOUTHEAST WISCONSIN — Daily life is changing in southeast Wisconsin as schools, entertainment venues, businesses, and more close due to the coronavirus pandemic.

Here is a list of current closures, cancellations and changes in Milwaukee and in other parts of southeast Wisconsin:

Haggerty Museum of Art
After careful consideration, the museum will be closed effective immediately through Friday April 10.

Milwaukee Art Museum
The Museum has decided to close to the public, with a tentative open date of April 7. Museum events through Tuesday, April 14, are canceled.

Archdiocese of Milwaukee
All public masses are suspended until Friday, April 3. Baptisms, funerals, and weddings will still happen.

Emaus Lutheran Church - Racine
Services and programming have been canceled from now until April 4.

Friedens Evangelical Church - Port Washington
Our March 15th Service will be held online at 9:00am.

Great Lakes Church - Racine/Kenosha
In Kenosha and Racine there will only be online services March 15 through March 22.

Immanuel Kenosha.Church
All services closed until March 29. The church will reassess Monday for any future changes and will still offer online services at 9 a.m. and 10:45 a.m.

North Shore Presbyterian Church
All services and activities are canceled until further notice.

Wauwatosa Avenue United Methodist Church - A Reconciling Congregation
Worship and other activities canceled from March 15 through March 29. The Milwaukee Hot Club concert will be rescheduled for a later date.

Concordia University Wisconsin
Concordia has suspended in-person classes through at least Monday, April 13. All classes will be delivered online during that period.

Cudahy School District
The district will be closed from March 13 to April 14.

Elmbrook Schools
Elmbrook Schools announced that they were moving to virtual learning on March 16. No students will report to school and spring break remains scheduled for March 23 to 27.

HOPE Christian Schools
All locations in Milwaukee and Racine will be closed on March 16. Monitor the school website for updated information.

Lake Geneva Schools
All schools will remain closed until April 6.

Mequon - Thiensville School District
The district is closing schools from March 13 to April 13.

Milwaukee Jewish Day School.
The current plan is for students to return to classes on Monday, April 20.

Mount Calvary Lutheran School
School will be closed from March 16 to April 6.

New Berlin School District
All schools will be closed until at least April 5. Monitor specific school websites for further updates.

Northern Ozaukee School District
The district is closing schools from March 13 to April 13.

New Testament Christian Academy
The school building has been closed until further notice, according to administrators.

Port Washington/Saukville School District
The district is closing schools from March 13 to April 13.

Racine Unified School District
All schools in the district will be closed from March 16 through April 3. We will continue to monitor this situation and expect to return to school Monday, April 6.

River Hills School District
The district is closing schools from March 13 to April 13.

Shorewood School District
The district is closing schools from March 13 to April 13.

Tenor High School
The high school will be closed from March 18 through April 13.

University of Wisconsin-Milwaukee
In person classes have been suspended beginning with spring break, which starts on March 15. In-person classes are expected to resume on Friday, April 10 at this point.

University of Wisconsin-Parkside
The university's spring break will begin a week sooner than planned - it will now start on March 16 and conclude on March 27. Alternative methods of instruction will start on March 30.

Waukesha School District
The School District of Waukesha has canceled face to face classes for students Monday, March 16 - March 20, 2020. No students will be allowed to report to school from March 16 - March 20, 2020. Students should expect virtual learning from home to occur starting on Wednesday, March 18 and continue through March 20. Spring Break is the week of March 23. Classes resume on March 30.

West Allis-West Milwaukee School District
From March 17, 2020 through April 3, 2020, schools will be closed for students and all extra-curricular activities and sporting events are cancelled. All Recreation and Community Services Department programming is also cancelled.

Alice Cooper
Rocker Alice Cooper's April 4 show at the Miller High Life Theatre is being rescheduled for Fall 2020. New dates will be announced in the future.

Armchair Boogie
Armchair Boogie's show, scheduled for March 13 at The Back Room @ Colectivo, has been postponed. All tickets purchased for the show will be honored for the rescheduled date, once announced.

The Bachelor Live On Stage
'The Bachelor Live on Stage,' originally set for March 15 at the Riverside Theater, has been postponed. The plan is to reschedule for a later date, and all previously-purchased tickets will be honored.

Carmen Live Shows
The March performances of The Tragedy of Carmen at the Marcus Performing Arts Center (March 13, 15, 21, 22) are canceled due to growing concern over the spread of the Coronavirus (COVID-19).
"We will be sending all Tragedy of Carmen ticket holders a digital performance, thanks to generous support from Studio Gear."

Flat Out Friday
Fiserv Forum said the 7th Annual Flat Out Friday has been canceled. Organizers are working to schedule a new date.

Gaelic Storm
Gaelic Storm, originally scheduled for March 15 at the Pabst Theater, has been postponed. All tickets purchased for the show will be honored for a rescheduled date that has yet to be announced.

GospelFest
A. Curtis Farrow presents GospelFest at Fiserv Forum has been postponed. All tickets for the April 10 show will be honored at the rescheduled date.

Kenny Chesney
Kenny Chesney, who was supposed to take the stage at Miller Park on April 25 postponed his show.

Michael Buble
Michael Buble's Milwaukee show has been postponed. The show was originally scheduled for March 29 at Fiserv Forum.

Milwaukee Pridefest 2020
The June 4 to 7 festival has been postponed due to COVID-19 concerns. A new date has not been announced.

REO Speedwagon
The classic rockers' show planned for March 14 at UW-Milwaukee Panther Arena has been canceled.

Shin Lim
Shin Lim's scheduled performance for Friday, March 13 at the Riverside Theater has been rescheduled to Sunday, September 27. All tickets that have already been purchased will be honored for the rescheduled date.

Skylight Music Theatre
Skylight has rescheduled its upcoming production of Evita for May 10-17. It was originally scheduled for March 20-29.

We Banjo 3
We Banjo 3's show, previously scheduled for Saturday, March 14 at the Pabst Theater, has been rescheduled to June 27, 2020. All tickets purchased for the show will be honored for the rescheduled date.

WWE Road To Wrestlemania
The WWE live event scheduled for Saturday, March 28 in Milwaukee, WI has been cancelled. Refunds are available at all points of purchase.

City of Milwaukee Municipal Court
All cases that are scheduled for a hearing from March 16, 2020 through May 1, 2020 will be rescheduled. Notices with a new court date will be mailed as soon as possible with additional information.

Milwaukee Public Library
All locations will be closed between March 16-29. Exception for early voting at Zablocki Branch Library

Brewers Opening Day
The Milwaukee Brewers announced that it was postponing opening day (March 26) by at least two weeks. Spring training has also been suspended.

Lambeau Field
Lambeau Field and Titletown will be closing for two weeks. This also includes Lambeau Field Atrium businesses, including the Packers Pro Shop, Hall of Fame, and 1919 Kitchen & Tap.

Milwaukee Bucks
The NBA has suspended all play for at least 30 days, Commissioner Adam Silver said. A decision about the league's future will be made at that time.

Milwaukee Wave
All Wave games have been canceled for the time being, as the Major Arena Soccer League has decided to end the 2019-20 regular season. The league will provide updates at a future date.

WIAA
The WIAA announced Thursday evening that despite efforts to limit the number in attendance at tournaments, they were canceling the remainder of state tournament series in response to COVID-19 concerns.

Catholics for Trump
President Trump was expected to make a stop in Milwaukee on March 19, but the event was postponed.

Children's Wisconsin
All non-time sensitive surgeries and clinic appointments have been postponed.

Colectivo Coffee
The coffee shop's doors will be closed until April 1.

CORE El Centro
The non-profit will be closed from March 16th through March 29th.

Habitat for Humanity
Starting March 18, Restores, construction sites, and the Milwaukee headquarters will be closed.

Jewish Community Center
There will be a temporary closing of all JCC building beginning at 7:00 p.m. March 14 through April 17.

Johnson Financial Group
Bank lobbies will be closed from Tuesday March 17, to Monday, April 13. Drive through services are still available.

Running Rebels
No after-school activities at all locations until April 13.

The History Center Washington County
Closed from March 14 through March 31.

True Skool - Milwaukee
TRUE Skool has decided to suspend our Spring After School Creative Arts Sessions and all other events until further notice.