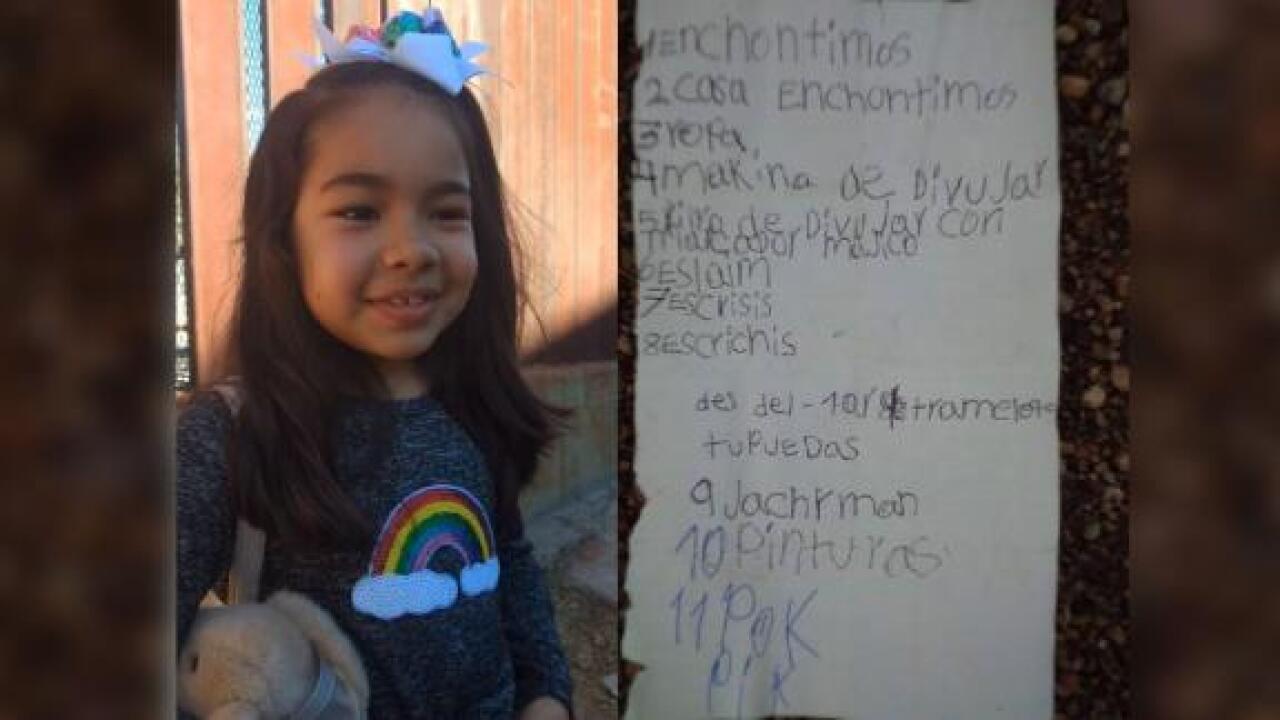 (CNN) — Randy Heiss wasn't going to let anything — not even an international border — stop him from fulfilling an 8-year-old girl's Christmas wishes.

Heiss was hiking with his dog this month near Patagonia, Arizona, when he spotted something strange in the brush: the tattered remnants of a red balloon.

At first he thought it was just some trash. But then he saw a note tied to it.

"I unfolded the note and I could see that it was in Spanish and written by a little girl," Heiss told CNN affiliate KPHO.

He had stumbled upon a Christmas wish list, written by someone named Dayami. The note asked for toys, clothes, magic markers, paints and a coloring book.

"It was a kid's Christmas wish. You can't turn away from that," Heiss told the affiliate. "Some little kid put that list out there in good faith, hoping someone would fulfill it, and so I just knew I had to do everything I could to fulfill that list."

He also figured out something else: The balloon was most likely released from Nogales, Mexico, about 20 miles to the south. So Heiss had his wife Marcela translate the note.

What caught their attention was the very last line, which read, "Traeme lo que tu puedas." It translates to "Bring me what you can."

Touched by the girl's plea, the couple made it their mission to find her.

Heiss sent a message to Cesar Barron, a radio host at XENY in Nogales, asking for help in finding the girl.

Barron knew exactly what to do. So on Dec. 19 he used social media and the station's airwaves to bring a little Christmas magic.

"As soon as we shared the letter, asking the public to help us find Dayami, the post blew up, and we found her father in just one hour," Barron told CNN.

"I messaged Randy and told him that same night her father messaged me, and that we had found the little girl. Randy quickly responded and said, 'We have to deliver her the presents as soon as possible.'"

The next day they all got together at the radio station to meet Dayami, 8, and give her the presents.

In a video of the meeting shared by Barron, Heiss' wife told the girl that Heiss found the letter and sent it to Santa, who asked the couple to help deliver the presents.

"Their little eyes were just wide with wonder looking at the gifts," Heiss told KPHO.

Meeting Dayami was special for Heiss and his wife, who lost a son years ago.

"We don't have grandchildren in our future, and so really getting to share Christmas with kids was something that's been missing in our lives," Heiss told CNN affiliate KVOA.

Dayami's parents, Cristian and Damalis Leiva, told Barron their daughter was taking part in the family's annual Christmas tradition when she released the red balloon with her Christmas wishes.

Dayami, along with some of her cousins, each wrote two letters to Santa. One was to stay on their Christmas tree and the other had to be attached to a balloon and released. Dayami's balloon made it all the way to Patagonia.

The family couldn't believe it when they were told someone had found her message.

"Someone told me they were looking for my daughter on Facebook, and her name is not very common. After seeing the post, I knew that was my daughter's letter. We had the same letter on our Christmas tree," Cristian Leiva said in the video.

"Although we live in different countries, they didn't think, 'Oh. they live there, and we live here,' they just knew we are all one community, we are all equal, and all human beings. This shows that there really are good people in the world."

After hearing about Dayami's story, a lawyer from Los Angeles reached out to the radio station and sent the girl even more gifts, Barron told CNN. He recorded a video of her receiving the presents.

And what did Dayami have to say about all of this?

"Thank you everyone for reading my story about my little letter, " she said in the video.