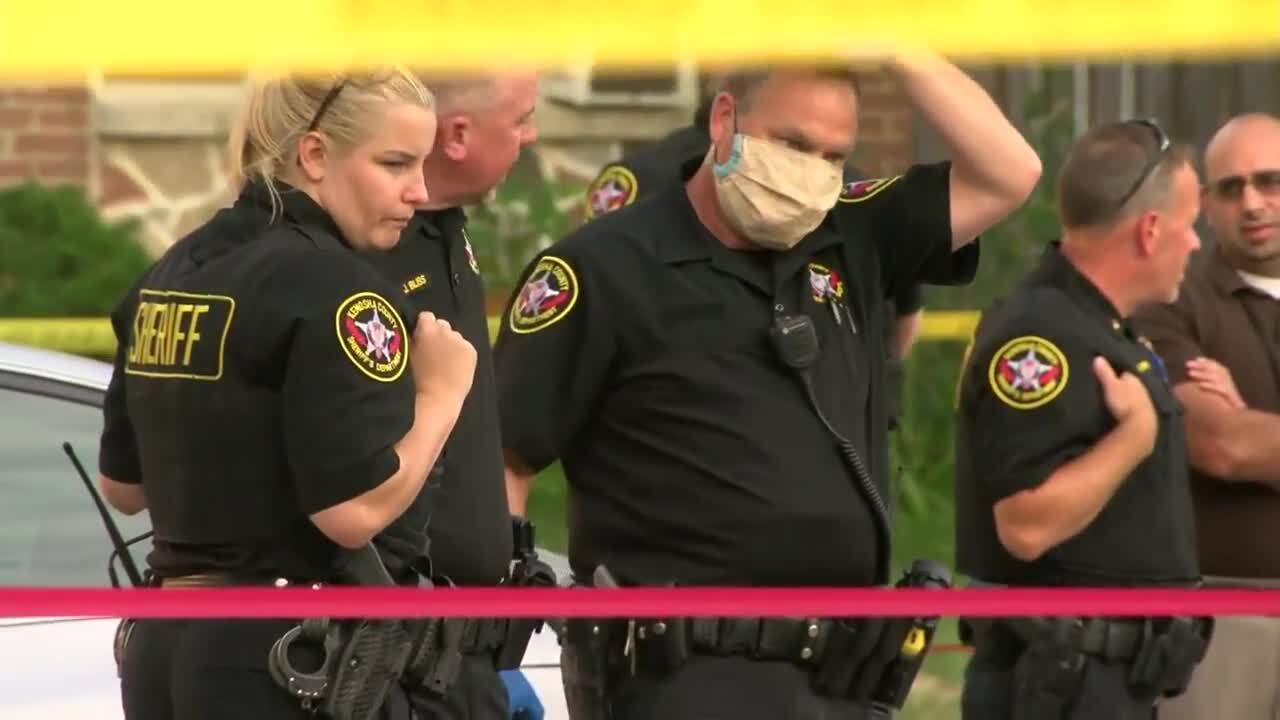 KENOSHA — On Sunday, Jacob Blake was shot by a Kenosha police officer. Now, people across the nation are taking to social media to share their reactions to the news.

Blake was shot and seriously injured Sunday night during a "domestic incident." Following the shooting, Blake's fiancée said he was shot in front of his children.

After the news broke on social media, local and state officials began reacting to the news and issuing statements.

Kenosha County Executive, Jim Kreuser, commented on the shooting, "The events that unfolded in our community over the last 24 hours are nothing short of tragic. My heart goes out to Jacob Blake and his family, and to everyone touched in some way by this horrific episode. We do not yet know many of the details of this officer-involved shooting, but we do know that it is the latest of a devastating series of events in our nation that have touched nerves and stoked fears about our relations with law enforcement, and with one another. Kenosha County recently declared racism to be a public health crisis, and our leaders — myself included — have resolved to address this issue in a meaningful way. Sunday’s tragedy and the ensuing reaction reinforce the need for change in our community."

Milwaukee Mayor Tom Barrett said in a statement on Monday, "The shooting of Jacob Blake is shocking, and, based on what’s visible in the video, appears to lack any possible justification. Tragically, Mr. Blake’s shooting is not unique. Law enforcement in every community must examine both the use of force and disparate treatment of people of color. There must be change. The Department of Justice must investigate this incident promptly and thoroughly."

Senator Ron Johnson issued a statement following the shooting, saying "I support a full and thorough investigation into the events leading up to yesterday’s officer-involved shooting in Kenosha. While emotions are understandably running high in the Kenosha community and elsewhere, I urge any demonstrators to remain peaceful and give our justice system the opportunity to work.”

Senator Tammy Baldwin also commented on the incident. She said, "The video from Kenosha of a Black man being shot is terrifying to watch and we need a full and independent investigation by the Wisconsin Department of Justice to get all the facts about this police shooting. As we pray for Jacob Blake to live, let peaceful protests lead the way to the answers we seek, and justice.”

Milwaukee County Executive David Crowley also sent out a statement saying in part, "Make no mistake, Blake’s wounds are the result of systemic racism, the policies, and practices that entangle our institutions and produce racially disparate outcomes, regardless of the intentions of the people who work within them."

My prayers go out to #JacobBlake that he will survive the critical injuries suffered as he was shot in the back multiple times by Kenosha police. As a father, it breaks my heart that his children went to sleep last night not knowing if their dad would make it through the night.

In response to the shooting, the Wisconsin ACLU said, "These repeated acts of violence against Black people by police have created a clear message: the police do not value the lives of the people in the Black and brown communities they serve in the same way that they do their own."

Congressman Bryan Steil said "We need the Wisconsin Department of Justice to conduct a thorough, independent, exhaustive investigation into the officer-involved shooting in Kenosha. We must support each other and our Kenosha community, and we cannot allow violence and destruction," about the incident.

"We must rid our communities and our systems of the racism that results in biased policing practices, creating devastating tragedies for Black men and women. We all must treat racism as the public health emergency that it is and take appropriate action to keep other families and communities from being traumatized by these reckless shootings," said Congresswoman Gwen Moore in a statement.

Speaker of the Wisconsin State Assembly Robin Vos issued a statement Monday afternoon saying, "It’s essential that we get a complete picture of what happened. I would ask that the Wisconsin Department of Justice Division of Criminal Investigation meet its goal of completing a thorough investigation in 30 days. The Kenosha community deserves to know the totality of the circumstances leading up to the shooting. Before passing judgement, we have to know if the shocking 20-second video clip shared with the media tells the whole story."

State Representative Gordon Hintz also issued a statement saying, "Last night, Jacob Blake was shot in the back by police officers seven times at close range in front of his children. Brutality like this towards Black people is a reoccurring event in our country. No matter how complicated systemic racism is, a representative government has a responsibility to do everything in its power to address the forces that disproportionately impact Black lives."

"Exhale. Everyone should take a deep breath. There is an investigatory process that must be followed, so no evidence is overlooked. We must let law and reason, not emotion, guide the next steps. I know passions and tensions are high right now between certain communities and law enforcement. It’s important to realize that tension goes both ways. Although each situation is unique, it is easy to lump every interaction together when it is the perceived reality you live in. But nothing justifies the violence and destruction we saw last night," said State Senator Van Wanggaard.

State Representative Sheila Stubbs of the 77th district said, "Yesterday evening, Jacob Blake was shot in the back repeatedly by law enforcement. In yet another event of excessive force, another family has been forever impacted by senseless police violence. Today, my prayers are with Jacob Blake and his loved ones. This tragic event will not be forgotten, and I hope it sheds a light on the systemic issues within our policing system.”

State Representative Greta Neubauer issued a statement saying, "I am horrified, sickened and angry over the police shooting of Jacob Blake last night. Continued police violence against Black people is a symptom of the systemic racism and white supremacy deeply embedded in our country’s past and present. Leaders at every level — federal, state, local — cannot continue to stand by. I support the right to protest in Kenosha and I will be joining people in the streets. Today and in the days to come, my thoughts are with Jacob, his family, and his community, and I am sending them strength in this time."

Common Council President Cavalier Johnson said, "This officer-involved shooting is yet another example of the deep-seated inequities that exist for Black residents across our city, state and country. For months now people have been taking to the streets in protest of these very actions, and while some progress has been made it is very clear we still have a long way to go."

The Kenosha Police Association addressed the incident and asked that people withhold prejudgment and let the legal process work.

They continued on by saying, "Anytime deadly force is used, our hearts go out to those affected by it. We assure you an independent investigation is being conducted by the Wisconsin Department of Justice, Division of Criminal Investigation... As always, the video currently circulating does not capture all the intricacies of a highly dynamic incident. We ask that you withhold from passing judgment until all the facts are known and released."

The Chairman of the Wisconsin GOP issued a statement on behalf of the organization, "There is a tragic human cost whenever anyone is injured or dies while interacting with law enforcement. We must have a thorough accounting of the facts — it’s good that authorities have moved to quickly investigate this incident, but it’s clear we still don’t have the full picture. Our thoughts are with those involved and who witnessed the incident. We pray that the City of Kenosha finds calm during these turbulent times.

The chairman continued by saying, “Unfortunately Gov. Evers statement last night jumped to conclusions even while the full scope of events has yet to be released and that puts the Kenosha community at risk for more violence. Last night we saw businesses burn and an officer knocked unconscious after being smashed in the head with a brick. Leaders shouldn’t stoke mob violence with only grainy cell-phone videos. The governor’s statement provoked anger and fear at a time when Wisconsin needs the facts and a steady hand.”

Ben Crump, the attorney for the families of Ahmaud Arbery and George Floyd tweeted about the incident saying, "Wow. This Black man was shot several times in the back by Kenosha Police today. He was getting into his car after apparently breaking up a fight between two women. He’s in critical condition now. We demand JUSTICE!"

Wow. This Black man was shot several times in the back by @KenoshaPolice today. He was getting into his car after apparently breaking up a fight between two women. He’s in critical condition now. We demand JUSTICE! #BlackLivesMatter pic.twitter.com/I1reDEp4nw

Following that tweet from Crump, he announced that he will be representing Jacob Blake's family and demanding answers from the Kenosha Police Department.

Democratic candidate for President Joe Biden also issued a statement regarding the shooting saying, "Equal justice has not been real for Black Americans and so many others. We are at an inflection point. We must dismantle systemic racism. It is the urgent task before us. We must fight to honor the ideals laid in the original American promise, which we are yet to attain: That all men and women are created equal, but more importantly that they must be treated equally."

The Milwaukee Bucks have also posted a statement on their social media.

The Brewers also made a statement about what happened, “The video of the shooting of Jacob Blake is deeply disturbing and raises many of the same questions we have been asking related to social injustice and racism in our communities. Once again, we are faced with images of a horrific incident that show what appear to be inexplicable and excessive force inflicted upon a Black individual. It stirs emotions of anger, confusion and great sadness at a time when we need healing and lasting change. We pray for a full recovery for Jacob, and our thoughts are with his family and loved ones.”

The Packers also issued a statement, "The Packers organization was shocked to see the video that showed police shooting Jacob Blake multiple times in the back. We are hopeful Jacob makes a full recovery, and our thoughts are with his family. While we understand a full investigation of this terrible incident will take place, we are deeply troubled at what again has become a painful example of the significant challenges we face with respect to police brutality, systemic racism and injustices against Black people. We continue to call for meaningful dialogue to affect the needed change we all desire.”