'Why aren’t we their equals?': Protesters march for community oversight of the Milwaukee Police Department 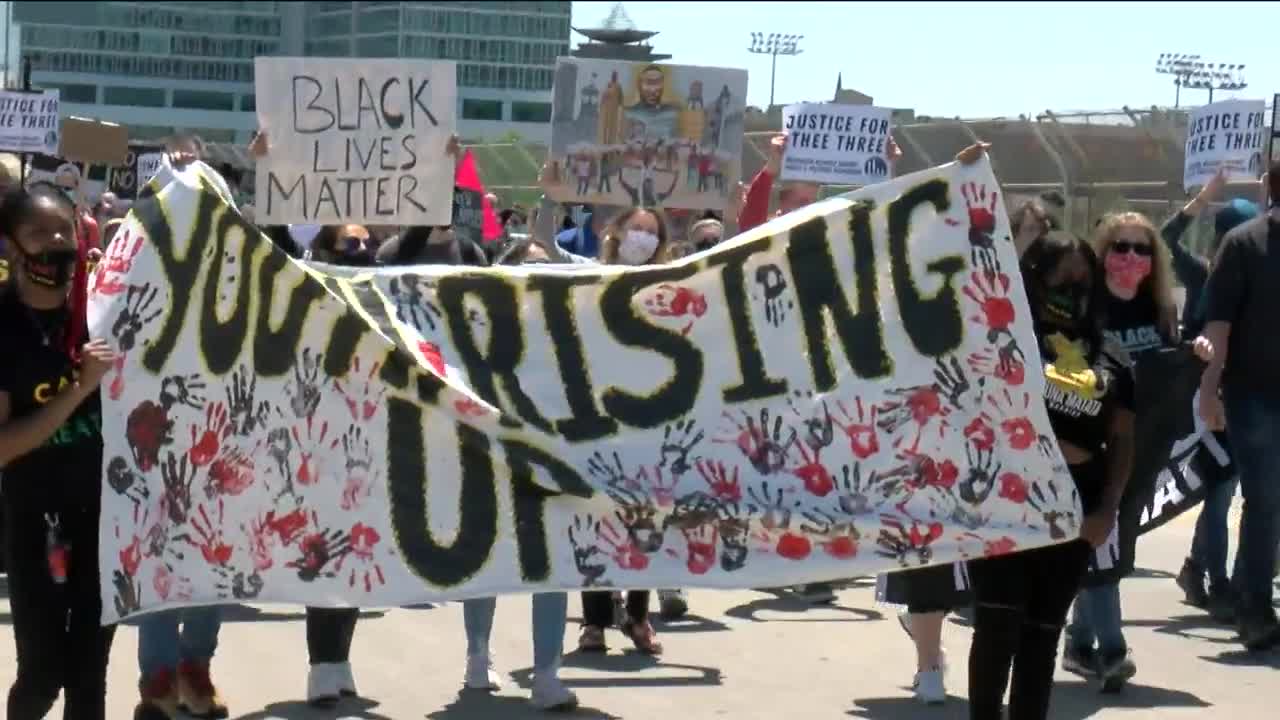 There is a movement among Milwaukee activists to replace the current Fire and Police Commission with a community board to oversee law enforcement.

MILWAUKEE — Community oversight of police was the focus of a protest Saturday afternoon in Milwaukee.

Dozens of people marched from Mitchell Park to the 16th Street Bridge and all the way to Milwaukee's City Hall chanting for change.

Within the crowd you could find Jeff and Shemya Cross, a husband and wife who have their own story of being scrutinized by the by the police.

“Six police cars stopped us, hopped out on us, put guns out on us,” said Shemya.

Shemya said it happened last summer as they were going to pick up her cousins. Police told them that her husband fit the description of a man who had just committed a robbery.

“That’s the life that unfortunately we have to deal with just being black and living in America,” said Shemya. “We really thought that could have possibly been you know the end of our life that time.”

So they and dozens of others took to the streets fighting for justice and police reform, walking across the 16th Street Bridge, just as civil rights activists did in the 1960s.

Protesters are chanting as they march across the 16th Street Bridge @tmj4 #Milwaukee pic.twitter.com/zyR8gArZmj

“Obviously our community still needs the police, but we need police who are going to do their jobs correctly,” said Jeff.

Lauryn Cross was one of the leaders of the rally, organized by the Milwaukee chapter of the Alliance Against Racist and Political Repression.

“They live in our neighborhoods, they go to our school, they go to our churches, why aren’t we their equals?”said Lauryn. “The police, police the police at this moment.”

She said that the group is calling for a Civilian Police Accountability Council, also known as CPAC.

The council would replace the Fire and Police Commission and put the community in control of the police. Brian Verdin has been an advocate for the cause for nearly 40 years.

“I think it would make the streets safer if in fact the police knew there would be serious repercussions if they’re out here you know brutalizing or even murdering any citizens,” he said.

Check out this poster created by one of the protesters showing marchers surrounded by #Milwaukee landmarks with #GeorgeFloyd in the background and his daughter in the foreground @tmj4 pic.twitter.com/NeSDhuQnMN

Taleavia Cole feels it would make a difference in the investigation of her brother’s death. Alvin was shot and killed outside Mayfair Mall in February by a Wauwatosa police officer involved in two other fatal shootings. Police said Alvin fired a shot first as officers chased him.

Whether or not CPAC is the answer, those marching said there needs to be more of a relationship between the police and the community. Until that happens, they’ll keep on chanting.

“The moment you let the message die, everyone’s just going to get back to their regular everyday lives and it’s sort of going to continue in a cycle. We can’t let that happen and we’ve just got to keep putting the word out there,” Jeff said.

People are fighting for CPAC in cities across the country, including in Chicago where a proposal is gaining support by several aldermen.