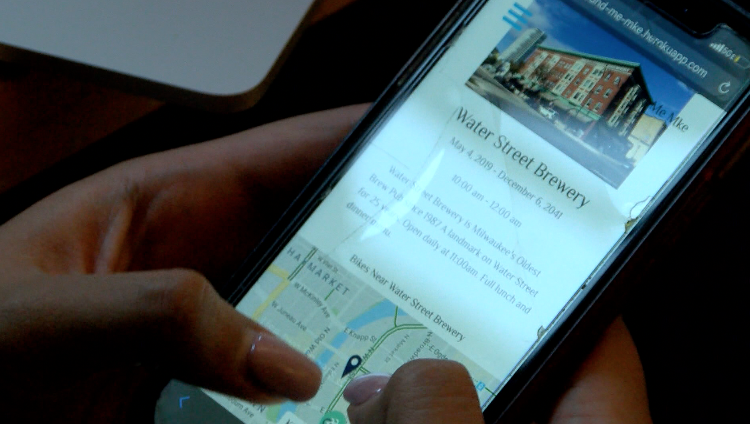 A Milwaukee-made app is trying to make your life easier.

MILWAUKEE — Milwaukee is the city of festivals. Especially during the summer, there always seems to be an event going on somewhere. With so much happening, it can make it tough to keep track of what's going on. However, a new Milwaukee-made app is trying to change all of that.

"It will let me know if there an event going on in cathedral square of Summerfest grounds," CEO of Sprout City Tech, Alondra Macias, said.

The app she is developing with four other developers, aims to consolidate all the information about "best things to do this weekend" and put it in one place.

"You're bored, and you want to do something right now. And you want to find out something in a certain radius close to you, so that's the problem we are trying to solve is that you can find out what's going on right now," Co-founder, Rebecca Nielson, said.

Real-time is the operative phrase. Open the app and you will see all the events currently happening around you and how to get there without a car.

"The app will also like allow you to select like what mode of transportation you want to select. Whether ifs it's like an electrical scooter, or the bubbler, or the hop, or the bus," Macias said.

It's all about making events more accessible, especially the lesser known ones.

"It's those offshoot festivals that people don’t know about," Nielson said.

It's not easy to do something like this, especially when there is already a deluge of apps that cater to what seems like every aspect of our lives. To differentiate themselves, the team at Sprout City Tech said it's their ability to consolidate information that makes them standout. This is in comparison to places like Lime, Yelp, and Eventbrite that only serve one purpose.

Plus, they don't plan on having as many ads or sponsored posts compared to a company like Yelp.

"We are not going to be taking any sponsorship money of events," Nielson said.

That doesn't mean all ads are going away. One revenue generator would be allowing restaurants near a festival to pop up in some sort of alert banner advertising their food.

TODAY'S TMJ4 responded, "so many events have food vendors at them already, though."

Nielson responded, "and that's where the sponsorship and ad would come in."

It's not just about festivals, though. They want to specifically focus on breweries, coffee shops, murals, and historic points of interest. They said they don't want to deal with all restaurants because there are just too many. The preliminary research they have made suggested people are interested in finding local and hidden cafes and murals.

Sprout City Tech expexts to have a beta version ready by mid-November. They hope to have a fully functional version, "well before the time the doc gets here," Nielson said.

A beta version means they need testers. The software developers said they are open to people reaching out to them on their website or social media by people interested in testing their product. They are also open to receiving suggestions on a name.

"We don’t have a name for the app yet, so we are looking for ideas. So if anybody has ideas for the app, that'd be great," Nielson said.

It's an app that would make the city of festivals... and breweries, murals, cafés, and historic places... a little more easy to navigate.