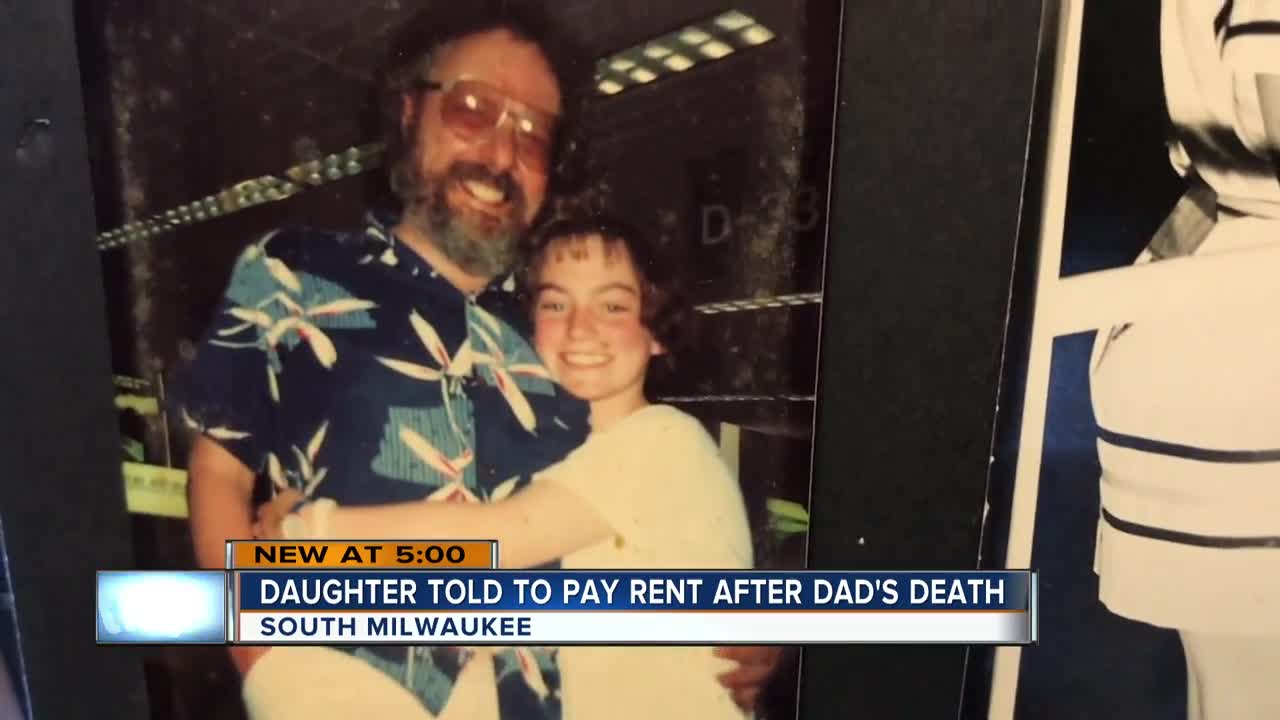 A South Milwaukee woman says she's being told to pay the following month's rent after her dad passed away suddenly.

A South Milwaukee woman says she's being told to pay the following month's rent after her dad passed away suddenly.

Thomas Burns, 77, died March 20th. His daughter, Shannon, says she expected a lot of expenses as a result, but not rent for the month of April at his former apartment, South Towne Village.

Eckert says she feels like she's being taken advantage of.

"I kind of felt like, you're charging me because he didn't give you notice he was going to die of a heart attack?" she said. "That's not right. I think I'm going to die this day so let me tell you. As far as I know, they would want a 30 day notice, but how do you do that with someone that's deceased? You just want free money from them or their estate or anything. I just think it's wrong."

Legally, it's not. According to Wisconsin Statute § 704.165, "if a residential tenant dies, his or her tenancy is terminated on the earlier of the following:

1. Sixty days after the landlord receives notice, is advised or otherwise becomes aware of the tenant's death.
704.165(1)(a)2.

2. The expiration of the term of the rental agreement"

So the tenant's estate would be on the hook for up to 60 days from the date of death. According to Burns' lease, he would only be responsible for 30 days. It's in the books to protect both the landlord and the tenant.

"When the tenant signs the lease, that legally binding agreement to pay rent for the duration of the lease term, the tenant is obligated to do so," Professor Vada Lindsey, Associate Dean for Enrollment at Marquette University Law School said. "That's dead or alive. The statute really does allow the tenant a little bit of relief. Otherwise, the tenant would be responsible for the rent for the duration of the term. Wisconsin Statute looks to aid the tenant by ensuring the tenant is not going to be liable for example, five years or two years. It seems unfair, but the tenant does have an alter ego. The alter ego is the estate. If the tenant doesn't have any property, the landlord will not be able to collect."

However, according to what Eckert says, the property management team cannot contact her directly. The Wisconsin Statute § 704.165 also reads, “A landlord under this section may not contact or communicate with a member of the deceased tenant's family for the purpose of obtaining from the family member rent for which the family member has no liability.”

"That is absolutely not legal," Lindsey said. "The statute is very clear, that when a tenant has passed away, while the tenant remains liable for the rent, for 60 days really, the landlord can go after the estate for the rent. But the Wisconsin Statues make it very clear. The landlord is prohibited form contacting the family and from trying to collect the rent from the loved ones."

South Towne Village is represented by Midwest Realty Management. Regional Property Manager Clark Oilschlager declined an on-camera interview Thursday but told TODAY'S TMJ4, "We did not hold them to the lease. They are responsible for the first to the 14th of April. They are not responsible from the time the new tenant moved in on the 15th. We've never had an issue. We explain to them, we have to give this notice. We do feel for the families that go through this. We try to be humane about it but at the end of the day, it's still a business and we have to have some sort of policy set in place."

Legally, property management companies could charge up to 60 days to the estate, however Midwest Realty Management says the estate is only responsible for 30 days. Because they rented the apartment to another person on April 15th, the estate would only be responsible for the first half of the month.

Eckert says she was told to expect a nearly $400 bill, but she says it's not about the money.

"My dad was never about the money," Eckert said. "If he owed a bill, he would pay it. I just think this is wrong. I don't want to pay them. If I have to, I will but I think it's really wrong what they're doing."