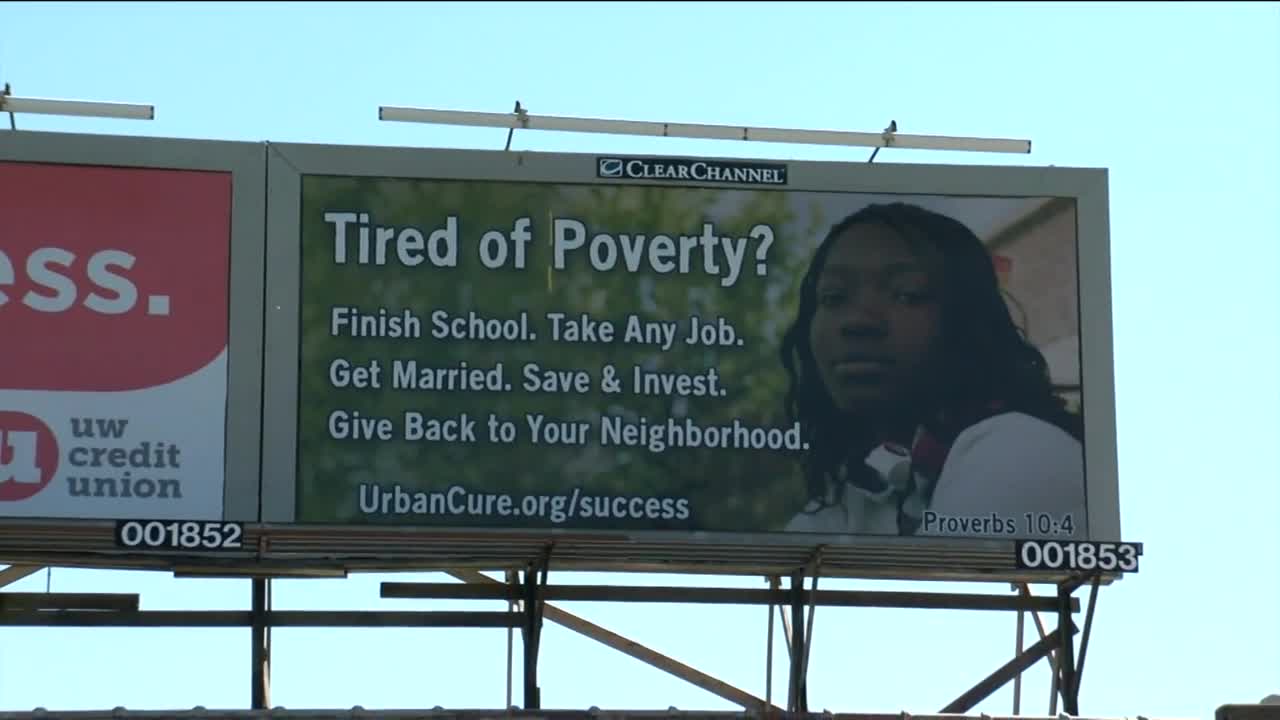 A controversial billboard near 28th and Villard has been removed after it gained attention from the community.

MILWAUKEE — A billboard at 38th and Villard, alongside others, are blank now. But, for a few hours, it contained a message asking people if they were tired of poverty.

It drew immediate backlash and many people say the message didn't address the systematic foundation of poverty itself.

"Poverty isn't a black issue. It's a people issue," said Markesha Hollins, a Milwaukee resident who saw the billboard on 38th and Villard.

Hollins said the imagery was hard to ignore.

The billboard showed a black woman alongside the question "Tired of poverty?"

"I'm tired of people using poverty and equating it to blackness. It's not a thing," Hollins said.

Answering its own question, the billboard suggested answers such as "Finish school," "Take any job," "Get married," and "Give back to your neighborhood."

"It makes a lot of assumptions about the community's values," said community psychologist Hilton Morris.

Morris said systematic and economic disparities need to be addressed at any time poverty is discussed.

"When you don't have bootstraps or boots to begin with, it comes off very tone-deaf," Morris said.

Several posts regarding the billboard began circulating on Facebook with many people pushing for its removal.

"It's got a positive message. I just think it's convoluted, distorted and misdirected for the most part," said Ahmed Mansour, a resident near 38th and Villard.

The outcry appears to have caught the attention of the owner of the billboard.

By early afternoon - the poverty messaging had been removed.

TMJ4 reached out to Urban Cure, a nonprofit for urban renewal and education for a statement. Urban Cure is the organization that posted the message. We are still working to hear back.

"We strive to respect a wide variety of viewpoints on diversity and racial sensitivity in our local communities and work to honor those sentiments in our advertising approval practices. This ad did not receive proper approvals, lacked appropriate attribution, and was promptly removed. We value our neighbors for bringing this to our attention."