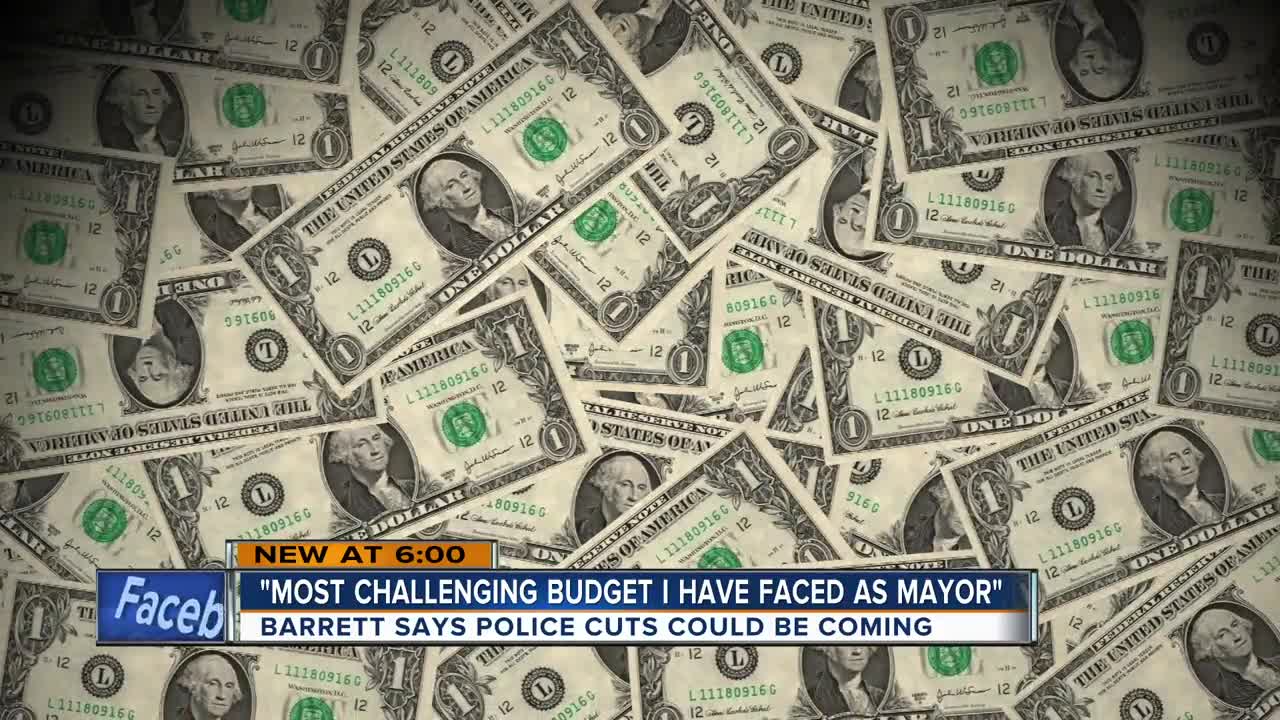 "It is the most challenging budget that I've faced as mayor," said Barrett. Charles Benson has the story.

MILWAUKEE — Milwaukee Mayor Tom Barrett said that dozens off police officer positions are on the line in his next budget.

"If a sales tax is approved next April, I will be able to avoid serious cuts to the Milwaukee Police Department," Barrett said.

We spoke with the mayor about the rising public safety costs and how a proposed 1% increase in the county sales tax could be a potential solution.

If the city used every dollar it gets in property taxes to pay for the Milwaukee Police Department, Mayor Barrett says it would not be enough money.

"It is the most challenging budget I have faced as Mayor," he said.

The city's budget woes are not new, but the Mayor says they are getting worse. Rising pension costs for police and fire fighters are a big driver of a dire financial situation. Barrett is backing a 1% increase in the county sales tax to avoid the cuts.

Benson: Give me the worst case scenario if you don't get the 1%?

Mayor Barrett: The worst case scenario is what I will be introducing which is budget with fewer police numbers .

Mayor Barrett: We don't know the exact number right now, but it certainly is a significant number. It's much higher than I want to see happen.

Sources within city hall say that Milwaukee could be holding off replacing retiring officers instead of proposing layoffs.

The sales tax increase is still considered a long shot. Wisconsin lawmakers would have to give the go ahead for the county to hold a binding referendum, forcing voters to decide yes or no in April.

"If the public wants us to have this, we can add the additional officers next year. We are talking dozens of police officers," said Barrett.

However, one piece of police business that the mayor isn't looking to change involves Chief Alfonso Morales. His contract is set to expire in January.

Benson: Do you want him renewed?

Barrett judges the success of Morales on declining crime, pointing to double digit drops in homicides and non-fatal shootings. But the final decision on keeping Morales will come from the Fire and Police Commission.

The Mayor points to double digit drops in homicides and non-fatal shootings as two reasons to keep the chief. The final decision with the chief's contracts rests with the Fire and Police Commission

"He's interested in staying on the job and I very much want him to stay on the job," said Barrett.

We contacted the police chief about the proposed budget cuts who released the following statement:

"The proposed cuts in the budget, including a reduction in sworn strength, will have a direct and significant impact on the Milwaukee Police Department's ability to perform its core functions," Morales said.

He also fears that the cuts could stifle the progress made in police-community relations.

Supporters hope that Milwaukee could use the money for capitol projects and deferred maintenance.

Should the proposal proceed, state lawmakers would need to vote yes to holding a referendum in Milwaukee County. If the plan is successful, the vote would take place on April 7th.