Nothing will stop this one-handed Waukesha guitarist 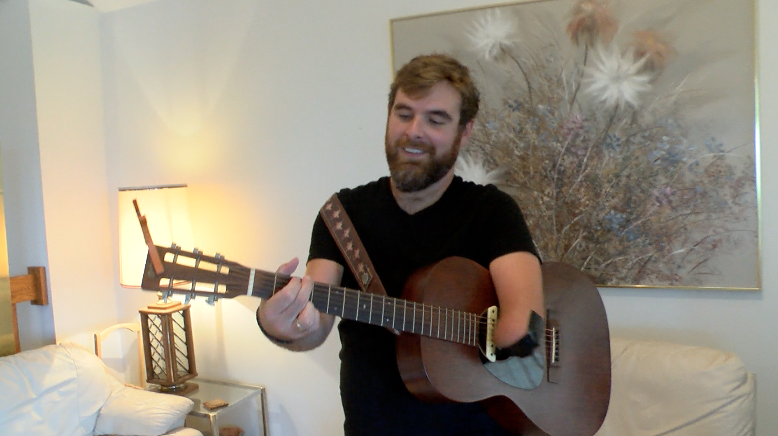 Tony Memmel is a one-handed guitarist on a mission to make music accessible for everyone.

WAUKESHA, Wis — One hand, three pieces of duct tape and a guitar. That's all Tony Memmel needs to make his dream come true.

It's a song that embodies his spirit, one of relentless positivity and determination to achieve his goal.

"Well I was born with one hand, and as a teenager I just had this really strong love of music, especially guitar," he said.

It wasn't easy. One guitar teacher turned him down, and his parents were somewhat skeptical. To boot, he had to come up with a device that would allow him to hold a guitar pick.

"Guitar did not come easy to me," said Memmel. "It took me almost eight years to develop my cast that I use now. So that's a lot of trial and error."

The cast is literally just three pieces of duct tape that keeps the guitar pick in place, but it's effective. So much so that he has made a life out of playing and teaching guitar. He has traveled to 15 countries and played all over the U.S.

He likes to work with the organization, Lucky Fin, which is a support network that helps kids with limb differences.

"It's about your talent and abilities and knowing you have a purpose and you can do anything if you set your mind to it," Memmel said.

While he maybe could use a fancier device than just three pieces of tape to play guitar, it's the message and story that goes with it that he wants to spread to kids everywhere.

"Really about problem solving with what you do have. Starting from what you can and then going from there."

On Thursday night, Memmel has the first performance of a six week tour. He is playing in Milwaukee and then hitting the road for more than 40 days to play and talk at schools, churches and hospitals.

Memmel's happy he can share his music with people, but his tours mean more to him than just a concert. It's a chance for him to help others and prove music can be accessible to anyone that wants it.