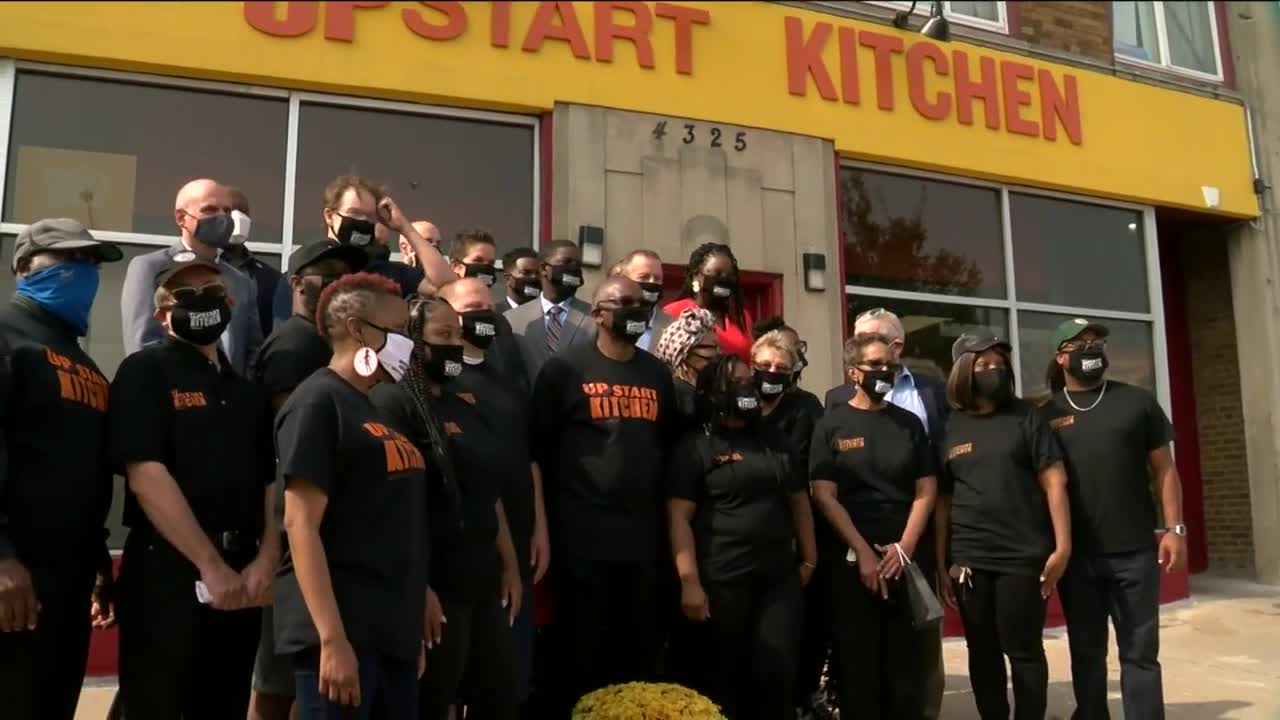 A new incubator kitchen space in the Sherman Park neighborhood is hoping to solve systemic issues facing people of color in Milwaukee. 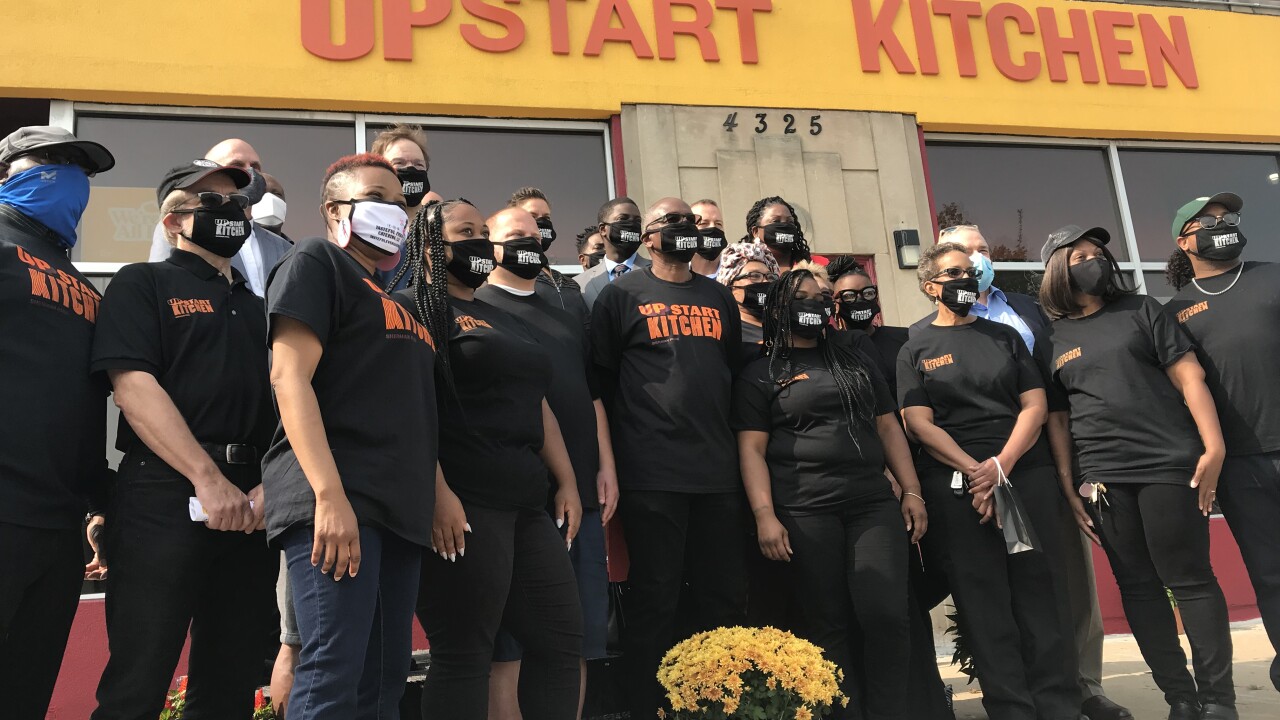 MILWAUKEE — A new incubator kitchen space in the Sherman Park neighborhood is hoping to solve systemic issues facing people of color in Milwaukee.

UpStart Kitchen is a low-cost, incubator space where motivated chefs can get their business idea off the ground in a commercial kitchen. It’s something that could impact several systemic issues facing African Americans.

The Small Business Administration says, in Wisconsin, 13 percent of small business owners are Black. The biggest issue facing aspiring Black business owners is money to get started. Systemic issues, like redlining, historically higher unemployment and lower wages, make it more difficult to get funding to support a small business venture.

Incubator spaces like UpStart Kitchen look to offer support to get over those hurdles facing people of color.

“I’ve done it for a long time, but without the funding and people to guide you and mentor your business, it’s been a struggle,” Kaye Muhammad, Owner of KO’s Delicious Desserts said. “Without a place to have a commercial kitchen to bake, it’s been a struggle to get your license.”

“It’s very expensive to start a food business,” Breanna McIntee, Owner of Synfully Delicious said. “So, here at UpStart, they took me by the hand and made everything happen for me. I don’t think my mom would have been given this opportunity and my grandmother for sure wouldn’t have had this opportunity. It just feels really good to have an opportunity like this.”

“It’s a chance to start my business and have a commercial kitchen,” Bonita Goodman-Johnson, Owner of Auntie Bunny’s Sweets said. “I can’t afford to go purchase or go rent and buy.”

Goodman-Johnson's bakery dreams are turning into a reality. She says it has always been a hobby of hers, but now that her children are grown up and out of the house, she has the time and money to be able to focus on her dream.

“I couldn’t afford it financially,” Goodman-Johnson said. “I could spend 16 hours baking. I can come here and do it in four or five hours. It makes a big difference. I can pass this on to my family. My kids even know how to do this. It’s an opportunity for them to pass it on. We want to carry this name on.”

For people like Goodman-Johnson, this shows a path towards creating generational wealth. White families have an average net worth of $171,000 which is nearly 10 times higher than that of a Black family at $17,150.

It will take hard work from these aspiring small business owners, but the payoff won’t necessarily be in monetary form. At its core, the work done at UpStart Kitchen is about food. There are 20 entrepreneurs here already licensed by the City of Milwaukee with 20 more on the way and 75 on a waiting list. With their help, these chefs can tackle another systemic issue severely impacting African Americans; their health.

“These food entrepreneurs want to bring healthy meals to those tables and remember the importance of good food and taking time during the day to share how things are going,” Missy Hughes, CEO and Secretary of the Wisconsin Economic Development Corporation said. “We’re going to have no longer a food desert, but a food oasis here.”

Those food deserts are a contributors to African Americans facing the highest rates of many health conditions in the country. Conditions like diabetes, asthma, obesity and others have African Americans atop their respective lists. Part of the reason is because underserved neighborhoods are frequently lacking in supermarkets or places to purchase affordable, good quality food which leads to the food desert designation.

Now, with the ability to house 40 food entrepreneurs under one roof, UpStart can provide an option for families to not just get food, but high quality, nutritious food. Right now, 35.2 million Americans live in food insecure households, meaning they lack access to affordable, nutritious food. This disproportionately impacts families of color. The United States Department of Agriculture shows 7.9 percent of white households are food insecure compared to 19.1 percent of Black households.

“We fail to realize what food deserts are,” Destiny Davis, co-owner of Tiny Bites said. “There are so many communities that don’t have a grocery store in close proximity. There are liquor stores, gas stations, corner stores but nowhere for kids to get an apple or banana or sunflower seeds or nuts. It’s all food like products but not food.”

Davis grew up in Milwaukee. She says was fortunate to have healthy food options in her home but she and her fiancé, Brien Roufus, see firsthand how health disparities start at a young age.

“Working in the church and volunteering at a daycare, we saw the government funded food the kids were eating, we weren’t ok with it,” Davis said. “We saw the food children would bring in from home. It’s chips, candy and sugar water with a hint of color isn’t lunch. It’s not sustenance.”

While rolling up cauliflower tots and making pretzel breaded chicken breasts, the couple says UpStart allows them an opportunity to make a living while making an impact.

“It’s people who look like me,” Davis said. “It’s people in the inner city of Milwaukee.”

It was a celebratory day with UpStart opening its doors officially, but their work has been in the process since March when the COVID-19 pandemic went into full swing. Instead of focusing on themselves, the people working with UpStart have been making meals to provide to those hit hardest by the pandemic. They’ve made over 25,000 meals and just received $50,000 in funding from Ascension Wisconsin to continue providing 6,000 meals monthly through the end of the year.

These efforts are proof of the progress being made in Sherman Park. Just four years ago, the neighborhood was the epicenter of racial injustice. The period of unrest resulted in millions of dollars worth of damage to buildings in the area. The damage felt irreparable but, just like the Sherman Phoenix before it, UpStart Kitchen also symbolizes the comeback for the neighborhood.

“This represents growth, represents everything I tell the youth I mentor,” Shenita Furlow, Owner of Taste of Love Catering Company said. “No matter where you come from, you can push forward. You don’t have to be a product of your surroundings.”

For more information on how to get involved with UpStart Kitchen, you can visit their website.