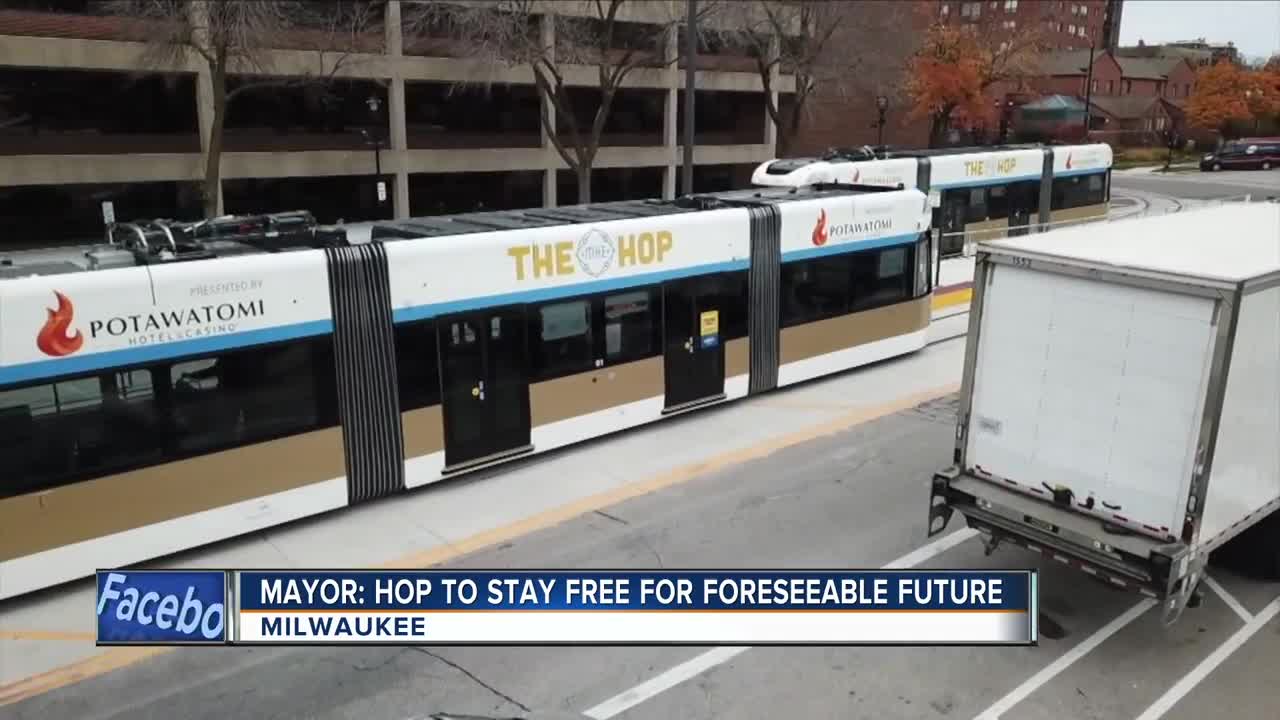 As the Milwaukee Hop streetcar system approaches the one-year mark this week, the mayor says the trains will be free to riders for the foreseeable future.

MILWAUKEE — As the Milwaukee Hop streetcar system approaches the one-year mark this week, the mayor says the trains will be free to riders for the foreseeable future.

Mayor Tom Barrett spoke with TODAY'S TMJ4 in advance of a public celebration of the streetcar line Friday. He points to the ridership numbers that exceeded expectations as a positive for the future of the streetcar. A sponsorship of the streetcar by Potawatomi Hotel and Casio has kept the rides free, although expected to end at the one-year mark, the city has no infrastructure in place to charge yet.

Ridership numbers on the Hop's website show that for 6 months of 2019 the streetcar exceeded the 1,800 passengers a day expected. Peaking during the summer months in July when more than 3,300 people a day took rides on the line.

"As more people ride it, the more they appreciate it" says Mayor Barrett, who hopes Hop supporters will spread the word when it comes time to lobby for the expansion of the system. "They'll help us, they'll say now that we've got this we want to make it work for everybody. We want people of all races and all neighborhoods to benefit from this."

Plans to expand the Hop to a transportation hub on Vel R. Phillips Avenue in front of the Wisconsin Center failed to pass through the Common Council this summer. The streetcar would have made it just south of the Fiserv Forum in time for the 2020 Democratic National Convention. That line could have eventually be expanded north into the Bronzeville neighborhood.

Critics of the streetcar say the decision to stop expansion of the system was the right move. Mike Nichols of 'The Badger Institute' says "the city has tried to get more federal grant funding and from our perspective, thank God that they didn't. The more federal money that we sink into it the more it is going to cost us locally in the long run."

Mayor Barrett says he hopes to put expansion in front of the Common Council again this year. In the meantime, in the spring, riders can expect to see new kiosks at some of the Hop stops. The message boards will tell riders where the next train is and how long it will take to get to that station.