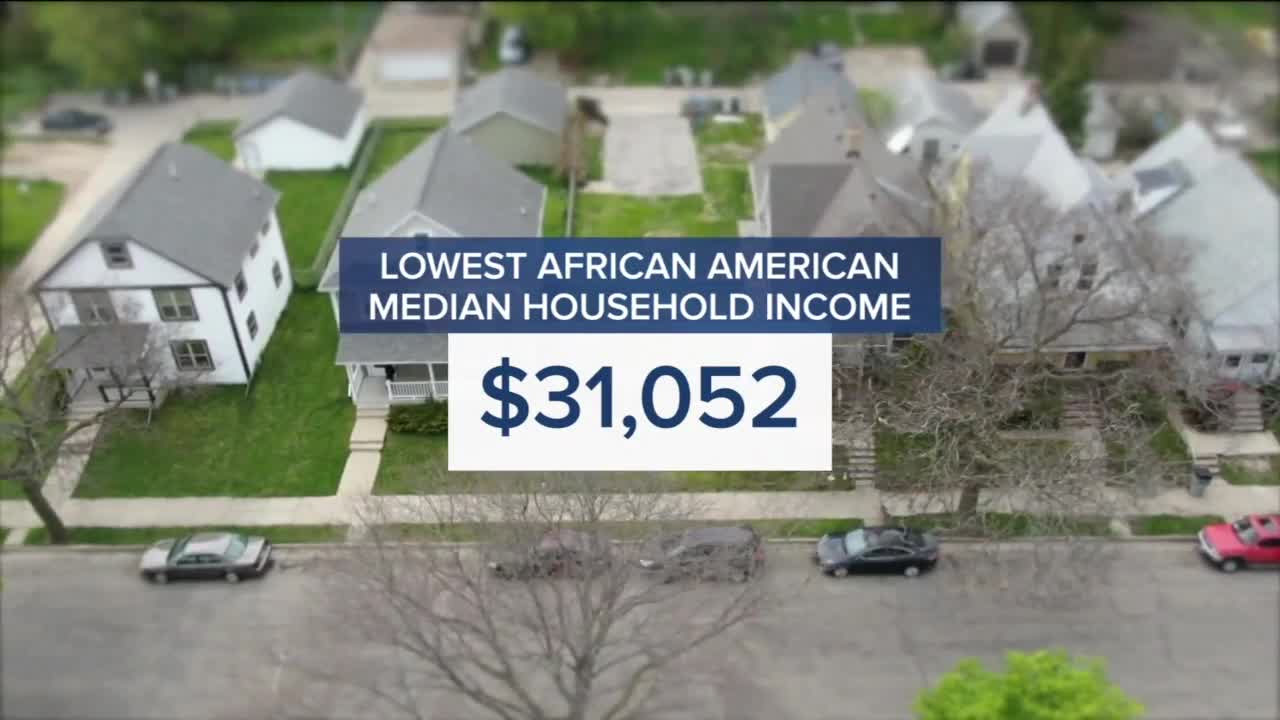 Our Shaun Gallagher spoke with organization leaders Thursday to discuss incomes within the African American community.

MILWAUKEE — A new study by the African American Leadership Association of Milwaukee (AALAM) comes with an unfortunate familiar result.

Milwaukee is the worst large metropolitan area in the country for the well-being of African Americans.

"The study tells us, we have our work cut out for us,” Antonio Riley, Board President for AALAM said.

Riley says the study looked at 50 different large cities in the United States, focusing on 30 indexes to determine the well-being of African Americans in those areas. Milwaukee finished dead last in five of the 30 categories and was 45th or worse in 20 of the 30 categories.

As bad as it sounds, Riley says this is a good thing.

“It gives us a road map,” Riley said. “We know we have a lot of work to do but the study focuses on the drivers that help us to begin to change that trajectory and rewrite that narrative.”

It’s going to be uphill to make changes, especially financially. Three of the five bottom rankings dealt with finances.

“It makes it very difficult,” Riley said. “The numbers showed, the 2008 Great Recession, incomes for African Americans dropped by some 7 percent. Since the early 1970s, down by 30 percent. Now that we’re into the COVID recession, there is great concern, the gains made after 2008, how do we protect those gains? We don’t want to lose, or have the bottom continue to fall out.”

Being at the bottom of these categories makes it especially difficult to get back up to par. Money may not buy happiness, but it can go a long way in a better well-being.

The Federal Poverty Level is $26,200 for a family of four. Pate says the number defined for poverty levels is antiquated. So, the number of African Americans struggling financially is likely much higher.

“Nationally, 61 percent of all Black families are living below poverty,” Pate said. “When you look at Milwaukee, in particular, when you say we’re the fourth poorest city in the country and a large number of Blacks are poor, that’s the reality of how you don’t see certain gross economic growth that’s going to be important also.

Pate says, if finances were more equitable, it would make everything else easier to make equitable as well.

"If you were to increase someone's access to more wealth, that'd be in financial dollars, that reduces domestic violence, increases school graduation,” Pate says. “It increases people's ability to do other things for their household, go back to school. So, yes, definitely. More income does make a difference.”

That’s where AALAM steps in. They’re working hard to reverse the course. They have major partners in many areas of the city, like the Metropolitan Milwaukee Association fo Commerce (MMAC) and the Greater Milwaukee Foundation.

"They’re the lowest-paid often, the least engaged in employment,” Ellen Gilligan, President and CEO of the Greater Milwaukee Foundation said, “They have, as they study underscores, some of the worst statistics. It really requires a laser-like focus on investment and strategy to move some of those needles.”

The focus of the AALAM and its partners are in three areas.

The third pillar is one Riley feels people will see the quickest impacts.

"We can see in a short period of time, those numbers going up in terms of African Americans in key management positions in corporations throughout the metropolitan area,” Riley said. “Studies show when you have driven up those numbers over a certain percentage, these other demographics you start seeing change there. We have three we’re focused on. In that one, we can see some big results relatively soon. That’s our hope.”

Gilligan says it’s a win-win for business. It’s why the Greater Milwaukee Foundation committed $30 million to invest in neighborhoods and entrepreneurs of color in the Central City.

While this is a long-term approach, Riley says the results could be felt within the next five years.

“We’re all trying to get towards that same goal,” Riley said. “The goal is to make sure we’re fighting for systematic change. Systematic change. That will help us change that trajectory to make Milwaukee and this region an attractive place. Not just for African Americans to survive, but to thrive. That’s going to take some work to do.”