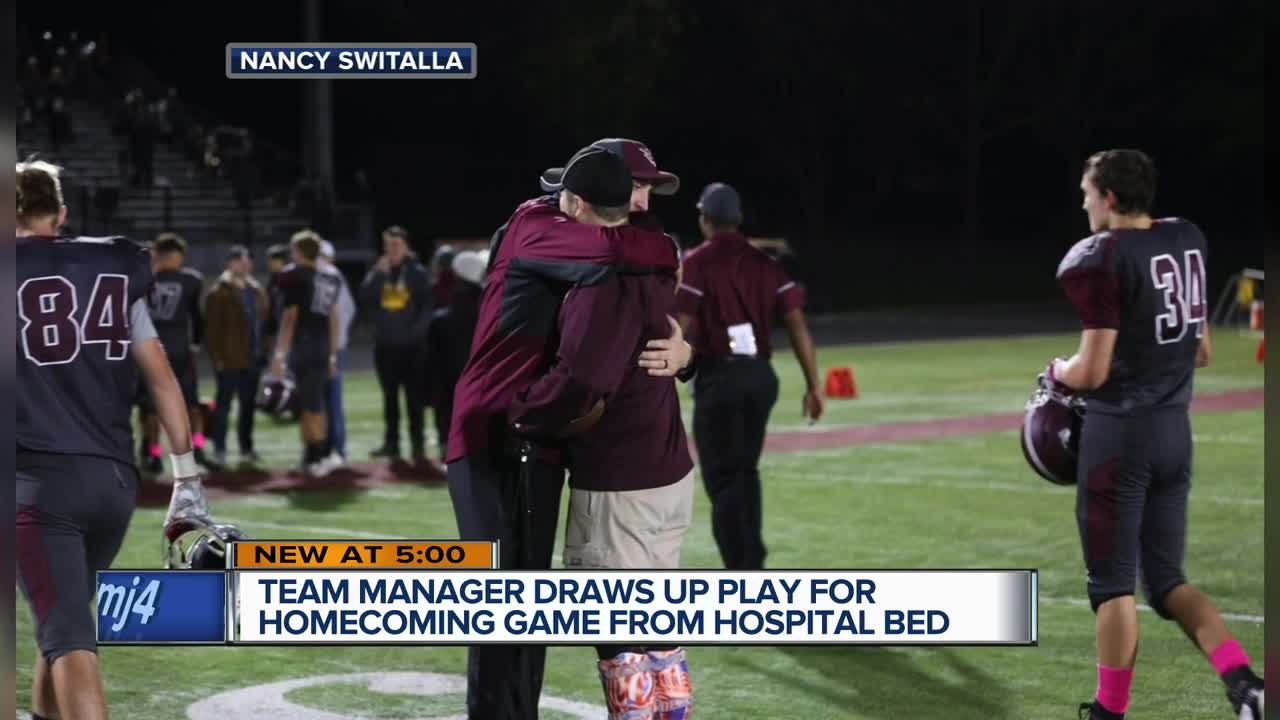 A football manager with an auto-immune disease feared he would miss his final homecoming game due to complications from his disease.

A football manager with an auto-immune disease feared he would miss his final homecoming game due to complications from his disease.

"I had a reaction to my condition that just went wrong," Seth Bayles said. "I got really weak and it's just part of all my conditions I have. It got so bad, I had to get rushed to the hospital."

Bayles missed all of the homecoming festivities of the week and was poised to miss the game on Friday. However, his coach wasn't going to let that happen.

"I came up with the idea, let's have him draw a play up and see what happens," Tyson Mengel, the head coach said. "I have never seen him smile so big. I was in the hospital room, his mom was there. They couldn't believe that was happening."

"He draws a slant and says, the kid is going to catch it here and go score," Mengel said. "I said, do something special! This is what he drew up."

The play was a jet sweep where the running back would get the ball and fire a pass downfield; something to catch the defense off guard. Because of the artist behind the play, Mengel knew exactly what to call it.

It was enough to motivate Seth to do whatever he could to make the game.

"I'm like come on," Seth said. "We got to get those discharge papers. Let's get out of here. I need to make that game."

Seth surprised everyone when he walked out onto the field for warmups. It got the crowd and the team pumped up.

Coach Mengel told the team and the school he planned to run the play in the second quarter. With time ticking down, he was running out of time so he had to run the play. However, it wasn't the best circumstance.

The ball sat at Westosha Central's 8-yard line. It was 3rd & 8. The game was tied. It's a play that could have destroyed the Falcons chances at winning if it didn't succeed.

"I knew it was going to be completed," Mengel said. "I had no fear anything bad was going to happen because Seth did it. Seth's the type of kid that, when he's around, things are going to be good and that's the way it is."

As the play unfolded, the quarterback hands the ball off to the running back. As the running back continues down the line, pressure forces him closer to the goal line. With a defender right in his face, he heaved the ball downfield some 20 yards. The wide receiver, with a defender around him, came down with the ball; a 20-yard completion.

"I was hoping it wouldn't be a terrible play and didn't work at all or actually lost yards," Seth said. "But it was awesome because it worked. It gave us a 20-yard gain and gave us a big first down that game."

"We needed a spark to get the offense going and that was it," Mengel said. "That got everybody excited."

The team went on to score on the drive and eventually won the game. Afterward, Coach Mengel got the team together and handed the game ball to Seth.

"I still can't believe it," Seth said. "I'm really overwhelmed about everything they did for me."

"He can't do a lot on his own but in this respect, he's right at the center of it," Julie Bayles, Seth's mom said. "Right at the heart of it."

"You can play, you can coach, but when you do something special for someone else, that's what you're going to remember," Mengel said. "I don't know scores. I don't know yards. I don't care. It's seeing the response kids get when their peers excel and those peers who don't get to excel often, that's the moving part of this sport."

Seth's drive has motivated his entire school to be altruistic. During the game, the fans raised $1,200 in 60 seconds to try and purchase a specialized chair to help kids with mobility issues enjoy everything life has to offer. For more information on Seth's Journey, you can visit his Facebook page.