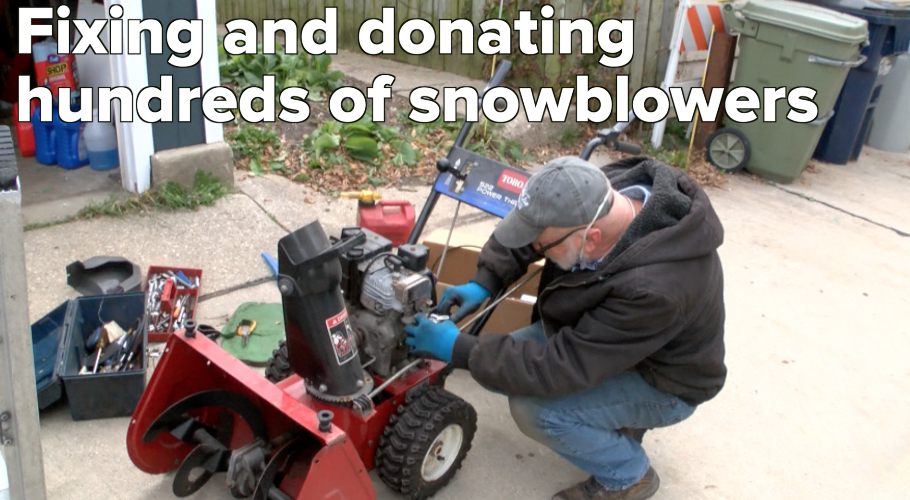 A Milwaukee man is saving people from back breaking snow shoveling one snowblower donation at a time.

MILWAUKEE — Greg Ryan has become all too familiar with the sputter of a dead snowblower engine. However, it's not for the reason you are thinking.

For the past four years, Ryan has been fixing and donating snowblowers to anyone who needs one.

"I want to find people that I think are going to use them in a good neighborly kind of way," Ryan, who lives in Milwaukee's Riverwest neighborhood, said.

Shoutout to Greg Ryan in Milwaukee!!

He has fixed and donated hundreds of snowblowers in the past four years. Snowblowers might seem inconsequential but they can really make a difference especially for the elderly and handicapped. pic.twitter.com/jqCh8db3g3

He has donated hundreds in the past few years. He said he gave out nine last week, and still has six in his garage.

To let people know about his free snowblower offer, he often posts on the Riverwest and Harambee neighborhood pages. However, he also posts on other community pages.

"It's one thing that I can do for the community. Basically, I've been pretty lucky in my life, and I was looking around for something IU could give back, and this is something I can give back," he said.

It all started about ten years ago. Ryan, who is a retired electrical engineer, started a post-retirement business fixing small engine machines. Customers would ask if Ryan wanted their old snowblowers and lawnmowers. Ryan said yes. At first, he refurbished them and sold them. However, that wasn't fulfilling Ryan.

"And I found that it was much more satisfying to give them away than to sell them."

For the past four years, he has been saving people from backbreaking snow shoveling. When people say they are interested he does like to vet who is asking for one, but he doesn't pry too much he said.