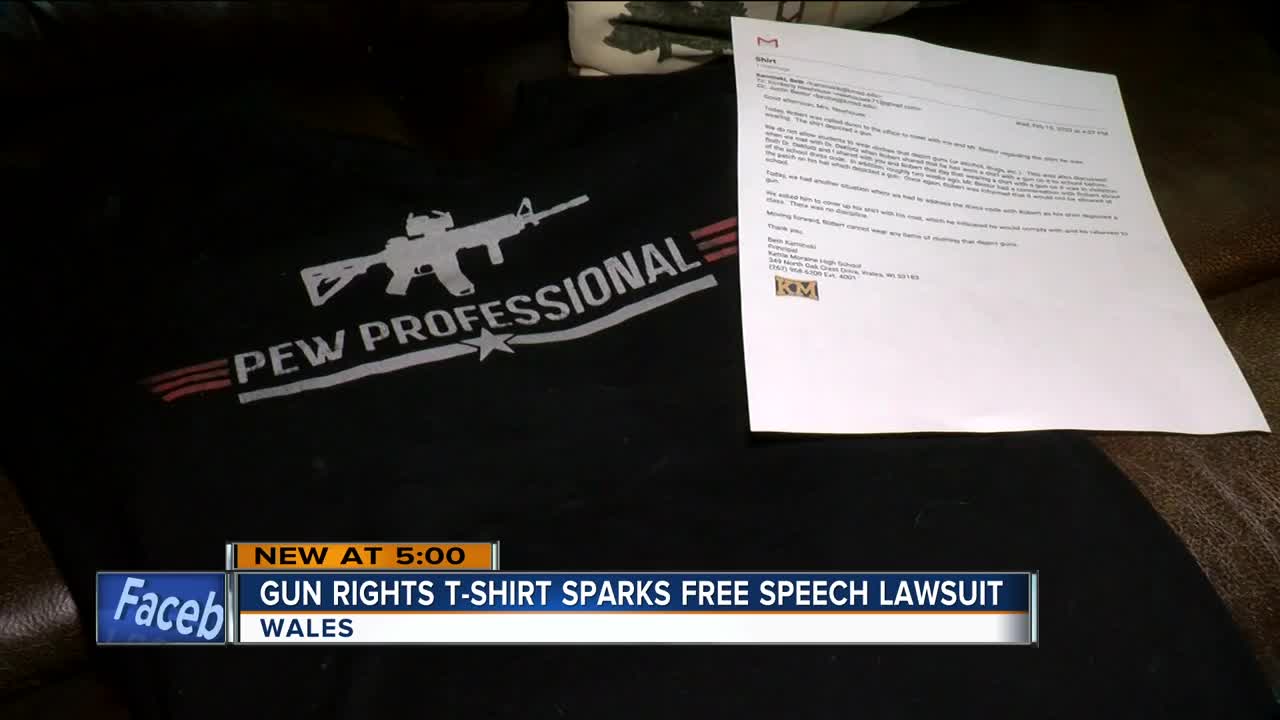 Two students from Kettle Moraine High School have filed a lawsuit against the principal for not being allowed to wear t-shirts that show images of guns.

WALES — The parents of two students from Kettle Moraine High School have filed a lawsuit against the school's principal for not being allowed to wear t-shirts that show images of guns.

The complaint states the students are gun enthusiasts and supporters of the Second Amendment. Both students recently came to school wearing t-shirts that had an image of a firearm that supported gun rights organizations.

"I got it because I like the shirt," Robert Newhouse, a sophomore at Kettle Moraine High School said. "They're really fun. It's great to use to go hunting."

Robert's father is a retired Marine. He says guns have always been a part of his life and it's something he enjoys learning about from his father. He is also on the trap team at school.

He says they were told by the principal that students are not allowed to wear clothes that depict guns. The complaint was also stated that the school dress code prohibits wearing anything threatening, violent and illegal, such as drugs and alcohol.

"I can understand if it was something that was very threatening or very violent," Kimberly Newhouse, Robert's mother said. "But just to be a picture and to be a supporter of our gun rights and be a supporter of just, legal ownership of guns, it was very upsetting."

The students claim the school dress code does not have this policy and that their t-shirts depicted firearms in a non-violent, non-threatening manner.

"It doesn't matter what your dress code says," Nik Clark, Chairman and CEO of Wisconsin Carry, Inc. said. "The constitution of the United States and the first amendment trumps your dress code."

Another student wore a shirt from the gun-rights group Clark is with. He actually funded the suit against the school district. He helped file a similar suit against the Neenah School District last week. He says schools making these decisions are setting a double standard.

"If a school sanctions a walkout for gun control and to call for gun control, to call for universal background checks, to call for red flag laws, certainly they should at least allow students to wear a non-violent, non-threatening shirt as they go about their daily business," Clark said. "If we allow schools, for the first 18 years of kids' lives, to indoctrinate them with guns are evil, guns are bad, you can't even have a picture of a gun in a non-violent, non-threatening way, we wouldn't even have a right to carry movement. If we allow that kind of indoctrination to take place in the public schools."

Clark also encourages students to participate in a social media trend called "2A Tuesday," as an ode to supporting the second amendment. He says students should wear non-violent and non-threatening shirts supporting guns on Tuesdays to share their beliefs.

When asked whether a student should be allowed to wear a shirt in support of being pro-life, Clark said he did support students' rights to do so but doesn't think it's the same as what Newhouse was doing.

"If a student wanted to wear some shirts supporting President Obama or Free Healthcare, that's their right to do as a student," Clark said. "Even though I'd support that right as well in some cases, I don't think that's a moral equivalent to the gun issue. I wouldn't draw moral equivalence though because any of those things, other political things, the second amendment is written into the constitution of the United States. Students should be taught that. They should be taught the heritage of guns to get an accurate representation of the history of this country."

They are asking the court to prohibit the school from banning the t-shirts and cover any attorney fees associated with the case. Robert just hopes he can continue wearing his shirt without facing any repercussions.

"I definitely feel like it isn't fair because I see other people expressing their other beliefs I may disagree with," Newhouse said. "But I'm not going after them because of that. I feel like I'm getting targeted because of my political beliefs."

Zack Zupke, Director of Communications for the Kettle Moraine School District, tells us the following:

"The district cannot comment directly on a matter relating to particular students. We can say that it has been recognized by courts that the district has legitimate pedagogical concerns in preventing violence in its schools, and we take that concern seriously. Wearing shirts with images of weapons is not an issue of free speech, and it can be respectfully regulated by the District."

I want you to know our district was named today in a TMJ4 story regarding a legal complaint. The story mentions a lawsuit brought by the parents of two Kettle Moraine High School students. The district cannot comment directly on a matter relating to particular students.

We can say it has been recognized by courts that the district has legitimate pedagogical concerns in preventing violence in its schools, and we take that concern seriously. Wearing shirts with images of weapons is not an issue of free speech and it can be respectfully regulated by the district. Please know that providing a safe learning environment for all students in our schools is always our priority.