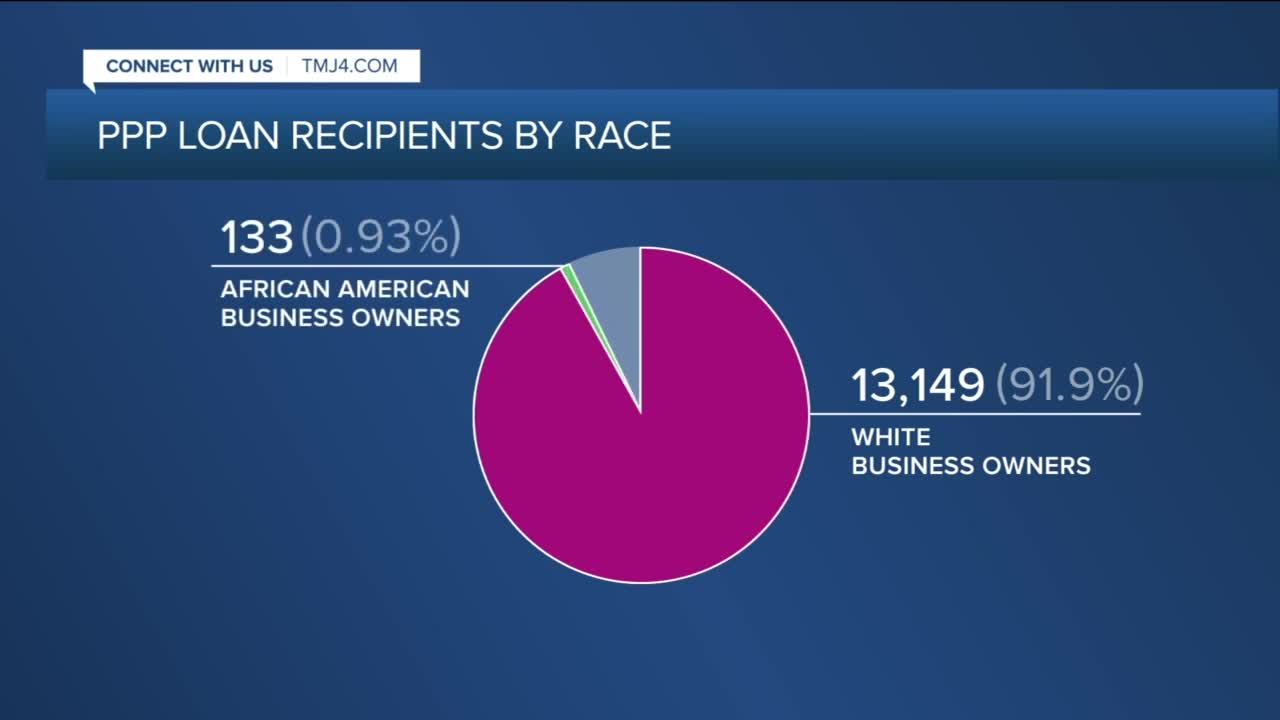 The U.S. Small Business Administration (SBA) information shows there were 73,104 Wisconsin loans under $150,000. Of those who reported race, 1 percent were African American business owners compared to 90.9 percent of white business owners.

For loans over $150,000, the disparity grows. In total, the SBA says 12,355 of these loans were given out in Wisconsin. Only 17 business owners identified as African American, representing 0.62 percent. White business owners made up 95.9 percent of the total business loans who reported race.

Whigham's cafe has only been open for about three years. He fits the mold of how many African American small business owners get off the ground. He saved his own money and had help from family and friends.

According to the Small Business Trends Alliance, the number one challenge for minority owned small businesses is a lack of capital or cash flow. They say 59 percent of minority small businesses use their own cash, family or friends to finance their business. That's 12 percentage points higher than the total average for small businesses (47 percent).

"Forty-one percent of Black owned businesses will close their doors as a result of the COVID pandemic," Ossie Kendrix, President & CEO of the African American Chamber of Commerce of Wisconsin said. "That's believable."

Kendrix points to a history of systemic issues causing this. He says, African American business owners often use their own money or fundraise through friends and family because they have a lack of equity. This stems from years of systemic racism preventing African Americans from doing things like owning homes which helps create generational wealth and provide equity for lenders to trust.

"They didn't have reserves or relationships with banks," Kendrix said. "So, when this Federal loan opportunity came out, many didn't go to a traditional bank where they may have been denied or didn't have a relationship to seek this opportunity."

That was Whigham's problem. Though his cafe has been open for roughly three years, he's only recently started a relationship with a local bank.

"I've been there a little over a year," Whigham said. "I want to hit a nice two or three year mark with them before asking for necessary funds that I need."

Whigham did try to apply for help. He didn't qualify for the PPP loan program and he was declined for the Emergency Injury Disaster Loan. So, for the last three to four months, he and his six employees have had to make it work on their own; putting their own health at risk in order to make a living. But, he still considers them to be the lucky ones.

"Some of these businesses have shut their doors for at least two months with no income," Kendrix said. "Looking at reopening, there are some challenges and there are some gaps to be filled that the PPP opportunity just hasn't filled."

"It wasn't really shocking," Kendrix said. "There were mishaps when it first rolled out. Black owned businesses questioned, how does the loan transition to a grant? When is it forgivable? I think overall, many Black owned businesses were sole-proprietors so barbershops, beauty salons didn't qualify. They were shut out of the opportunity. Many have few staff and may not even have payroll so they couldn't meet the staffing level requirements. So it wasn't surprising."

Kendrix wasn't the only one to have concern. Small Business Majority, an advocacy group, released a statement about the discrepancies in the data.

"The data set makes it next to impossible to determine how well small businesses were served by PPP. The SBA has already recognized that demographic information is lacking, and it plans to collect this data during the forgiveness process; however, more information is needed. Moving forward, SBA must revise the information to include the amount requested by a borrower and the amount received, and publicly commit to reporting revised data on a rolling basis now, and through the forgiveness process."

According to the SBA data, 85,459 loans were given out in Wisconsin and only 14,310 (16.7 percent) responded with race demographics. Though the SBA says, "The loan forgiveness application expressly requests demographic information for borrowers," it is not required.

"SBA is working to collect more demographic information from borrowers to better understand which small businesses are benefiting from PPP loans," the SBA said in a statement.

Until more information is released, Kendrix says its Black owned businesses and the community that will be needed to even things out."

And Whigham is going to keep doing what he does best; stay positive.

"When it comes to money, no one is going to throw money at you because you say, I'm determined and my business is going to do great, let me have some money," Whigham said. "It doesn't work like that. If it doesn't positively impact my business, I keep moving. I don't want to fill myself with negative energy."

The SBA says they have started accepting PPP loan applications again and will continue to do so through Aug. 8, 2020.