Drugged driving is on the rise in Southeast Wisconsin 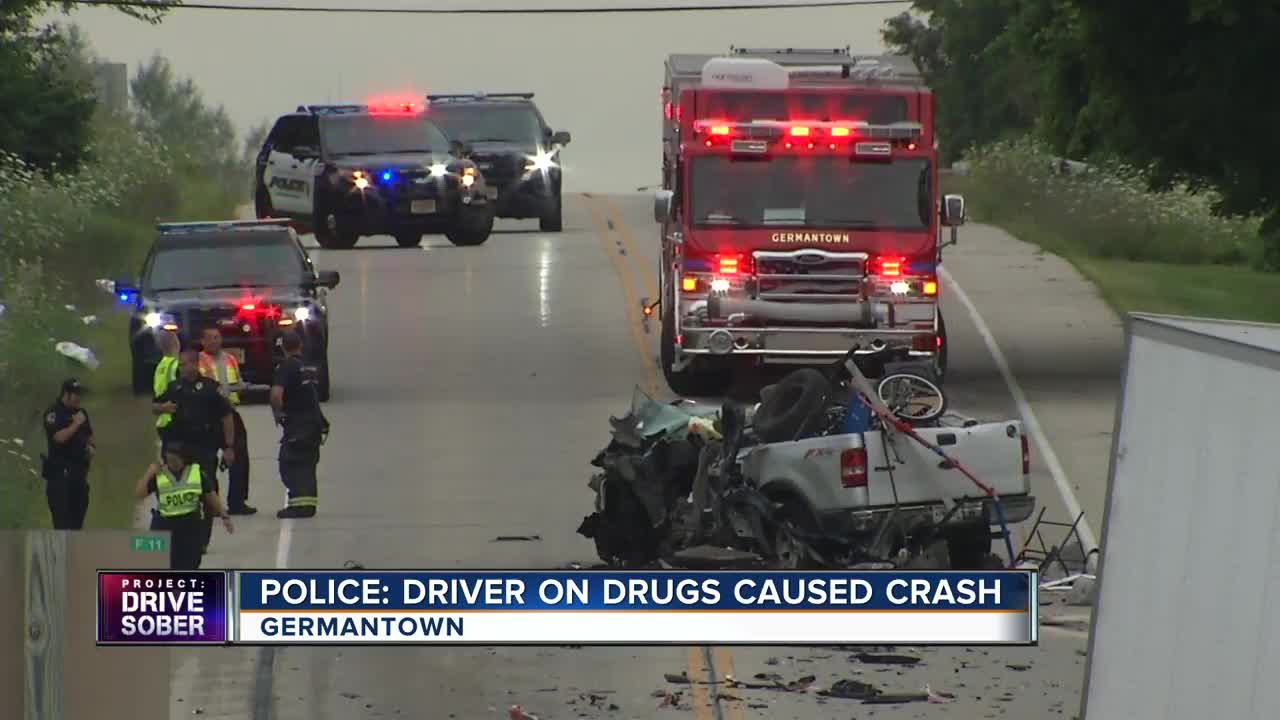 Authorities believe that the driver of a pick up truck was under the influence of a controlled substance when it swerved into on coming traffic colliding with a semi truck.

GERMANTOWN, WI — Police believe an early morning crash between a semi and pickup truck was the result of drugged driving.

Germantown Police say the 28-year-old driving the pickup truck crossed the center line on WIS 145, also known as Fond du Lac Avenue, near County Road Q around 5:05 a.m. A semi heading southbound collided with the pickup and continued into a nearby ditch.

The driver of the pickup was stuck in the vehicle. Police say he was unconscious and airlifted to a local hospital with extensive injuries. The driver of the semi was taken to the hospital as a precaution but was released earlier.

Germantown Police said the pickup driver was likely under the influence of drugs. He also has a prior OWI charge from last year.

"It's clear the pickup truck did cross the center line," Capt. Mike Snow with Germantown Police said. "For whatever reason, that part is still under investigation. Investigators do believe controlled substances are a factor."

The crash created quite a backup in the morning. Both directions of Fond du Lac Avenue were closed until after 9:00 a.m. The pickup truck had a number of items in its truckbed that were scattered across the street and the truck cab was destroyed from the impact of the crash.

"All of a sudden, just a really large pop sound," Amanda Krueger, a nearby resident said. "I jumped out of bed."

Krueger says her husband got her out of bed and called 911. They both ran out to check on those involved.

"The semi-truck driver seemed like he was ok," Krueger said. "The other guy was definitely wedged in his vehicle pretty badly. We could hear him breathing and waited for help to be on the way."

Drugged driving is on the rise in our area. Arrests in Milwaukee county have increased by nearly 90 percent since 2014. Drug-related crashes are also up 232 percent since 2005. According to the most recent Wisconsin Department of Transportation data from 2015, 149 people were killed in drug-related crashes. It's a problem increasing in difficulty for law enforcement.

"It's definitely been an increase, and it is hard for officers to make a case," Snow said. "We have drug recognition experts to see those indicators. [But], especially in this one, the driver was unconscious so investigators are looking on scene for different indicators. Whether it be paraphernalia, actual drugs located at the scene or things of that nature. We're better than we were five years ago, but it still is a challenge for our officers no doubt."

Police need to wait for toxicology results to come back for the 28-year-old driver before charges can be filed. The driver of the semi will not face any citations or charges.