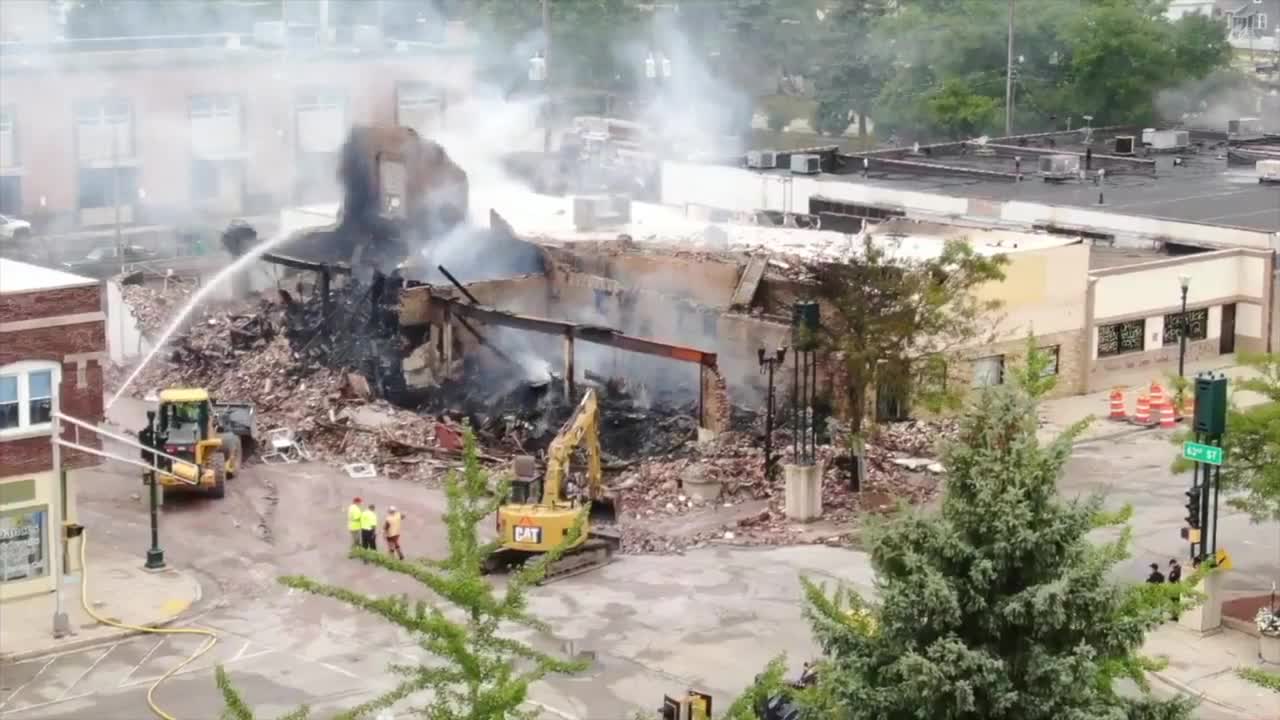 Drone footage shows the extent of damage in Kenosha after a second straight night of unrest.

KENOSHA — Drone footage gives a clear perspective of the damage caused in Kenosha after a second straight night of unrest.

An aerial view of the area 63rd street after a night of unrest shows blackened buildings that were still smoldering.

Protests began early in the day in Kenosha over the shooting of Jacob Blake. Demonstrations were peaceful for the majority of the day and night. However, tensions began to escalate after protesters stayed out past the 8 p.m. curfew.

City of Kenosha is putting up heavy duty fencing in front of the courthouse and other government buildings around 56th & Sheridan after the second night of unrest. pic.twitter.com/7kf01mTcdr

The Department of Corrections building was set on fire and crews worked to demolish the building on Tuesday morning. Hot spots and flames still shot out of a neighboring business, B&L Furniture, which was targeted by vandals overnight as well.

TMJ4 News Photographer Gideon Verdin-Williams took the video. He said he could still see active fires. Also, he felt as though he could relate all too well to the destruction since he has also seen his community experience something similar.

The scene was so massive and I could see at least 3 active fires with my own eyes. After filming the scene on the ground I walked about 100 yards away to safely lift my drone in the sky. After talking with neighbors about this huge loss in the community I felt a drone shot could give viewers the perspective needed to really grasp the totality of the damage. I totally I am always blown away by the image quality but after looking closely I was left speechless by how much of Kenosha will be affected by these fires. The homes the businesses the community and the feeling of seeing your community destroyed. I know the feeling all to well as I witnessed looters destroy and burn my community on Martin Luther King Drive after George Floyd’s killing. Honesty I saw more hopelessness and sadness than hope. Neighbors were crushed. One neighbor told me a local was beaten badly while trying to protect his business. She says he always helps the community’s needy and homeless. And he was attacked for trying to defend his business. Now his business is burned to the ground. Neighbors were also afraid to go on camera due to threats of retaliation. And a rumor that riots will rerun Friday. You never quite know the pain of watching your neighborhood burned down until you have experienced it yourself. It’s a feeling of hopelessness you cannot explain. Many residence were crying as they watched clean up efforts. The whole experience in Kenosha during this terrible time is one I will always remember.

"It's just all gone," said Linda Carpenter as she cried into her son Scott's arms. She and her family have owned their furniture shop for nearly 40 years before it was reduced to a pile of burning debris.

On Tuesday morning, volunteers showed up to help sweep up glass and restore as much order as possible.

"It's devastation," said Davis Hutto, who showed up to help pick up the pieces. "[The business owners] work their entire lives to have these businesses."

Protests began Sunday evening after news broke that Jacob Blake was shot and seven times in the back by Kenosha police from close range. Protests turned to overnight unrest Sunday night into early Monday morning. During Monday afternoon and evening large crowds formed in Kenosha demanding answers and the police involved be arrested.

Attorney Benjamin Crump, who is also representing George Floyd and Joel Acevedo, will be representing Jacob Blake as well.

The Wisconsin Department of Justice said that it is currently investigating the shooting and will have its results within 30 days.