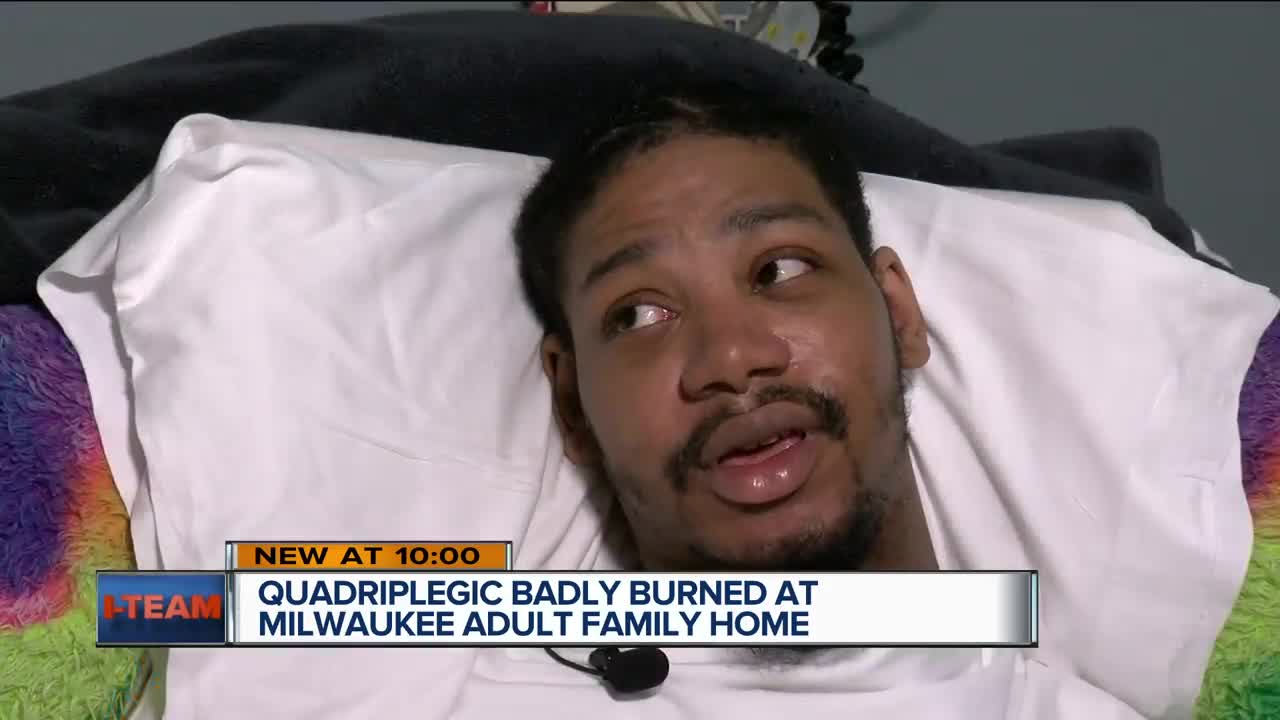 At 25 years old, Otis Spiller, has had setback after setback in his life. When he was a teen, he was in a bicycle accident leaving him paralyzed from the shoulders down.

MILWAUKEE — WARNING: Viewers may find some of the images in this story disturbing.

At 25 years old, Otis Spiller, has had setback after setback in his life. When he was a teen, he was in a bicycle accident leaving him paralyzed from the shoulders down. The I-Team interviewed him when he was in the hospital most recently. This time, he was there because he said someone taking care of him, hurt him.

“It was April 16 and one day my hands needed to be washed and so the caregiver, she got a bucket of water from the bathroom I’m assuming,” said Spiller from his hospital bed.

When the I-Team visited Spiller in the hospital, he showed us how far the water went up to his arm by pointing out the difference in his skin color. Spiller suffered second-degree burns.

“So, when it was in that water, you didn’t feel anything?” the I-Team asked Spiller.

“Yeah. I didn’t feel anything,” he continued.

“So, when did you start to think something is not right?” the I-Team asked him.

“Until she actually pulled my hand out of the water,” he said.

“My hand was very red. She ended up getting a towel and try to wipe my hand and the top layer of my skin peeled off,” Spiller said.

State inspection reports detail Spiller's story, that he was left unattended with his hand soaking in the water for about 15 minutes.

“That particular night, it started to swell up. My hand didn't even look like my hand. It was like the size of an orange on top of my hand,” Spiller said.

So, Spiller was transported to the hospital. As soon as the I-TEAM started investigating, we learned this case wasn't as simple as a hand injury.

In the state documents, it says six days before Spiller was burned, he was given a 30 day notice of discharge, Kastle Communities wanted him out of the home.

“So, when I went back, I went up the ramp and she came out and she locked the door on me and said ‘You can't come in here,’” said Spiller.

The documents say it was "...due to non-compliance of care offered..." and "...extreme amount of police contact causing concern to neighbors and members residing in the home."

During about a six-month time frame when Spiller was at the home, from late November to late May, Milwaukee police responded 20 times, seven of those were for "trouble with a subject.” The police reports didn’t include names.

State investigation reports from July 2019 reveal the day after Spiller was burned, a plumber found "water heaters were set to 150 degrees." The state recommends water temperatures to be between 105 to 115 degrees.

The inspection reports state, "there were 23 other readings taken in April, the same month Spiller was burned. Twelve of the readings were over 120 degrees including two readings of 147 degrees."

The I-Team contacted the owners of Kastle Communities numerous times to see if the caregiver who put Spiller’s hand in the water is still working at the home. We reached out through email, over the phone and dropped off a letter asking the owners for an interview. We are still waiting for a response.

“Why would somebody put my brother's hand in hot water? Especially if they tested it first, and it was hot to them, why would you put his hand in there?” said Spiller’s sister, Cherry Bratchett.

“He's already a quadriplegic, so why put more stress on him?” she told the I-Team.

The I-Team learned the caregiver’s name, but we’re not releasing it since she has not been charged criminally.

Spiller is staying at a new facility and told the I-Team he is doing better. At last check, he said he plans to file a lawsuit against Kastle Communities.

“I think the way that they've acted since this incident has been very irresponsible,” said Groth. “Integrity is doing the right thing and they have not done the right thing."

“We have been in touch with Kastle Communities through their representatives and hopefully we can resolve this beforehand, but we're prepared to go as far as we have to,” he said.

You can file a complaint against a caregiver or home here.