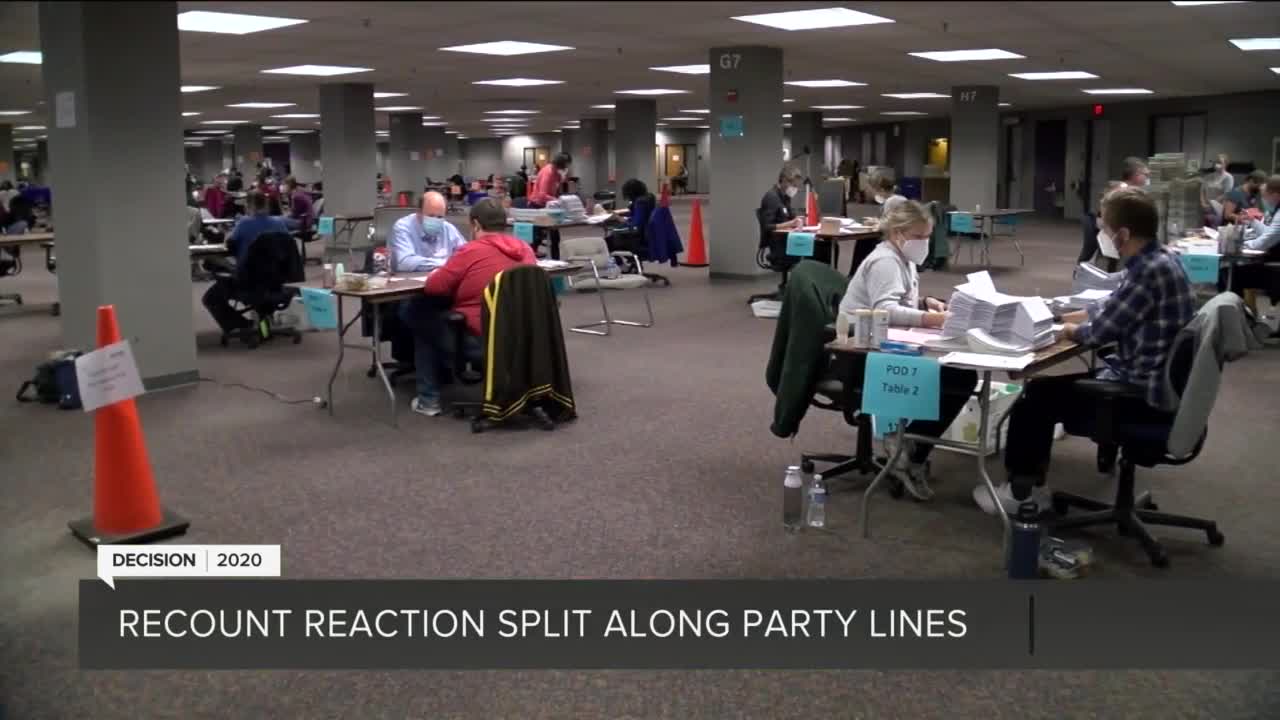 Two weeks after Election Day, and Wisconsin’s two biggest counties are running it back.

MILWAUKEE — Two weeks after Election Day, and Wisconsin’s two biggest counties are running it back.

President Donald Trump’s campaign is requesting a recount in Milwaukee and Dane Counties. There were 805,045 votes in the two counties, unofficially.

“There were questionable practices leading up to Election Day,” Former Republican Lieutenant Governor Rebecca Kleefisch said. “I think what this recount is designed to take hold of, is what processes did not actually account for what is in the law.”

“Everybody knows, this is an attack on cities, on minorities and places that historically have voted Democratic,” Milwaukee Mayor Tom Barrett said. “Don’t let anybody fool you that this is about irregularities. This is flat out an attack on democracy in cities and places where people of color live.”

Wisconsin has seen two recounts in the last 10 years, in 2011 and 2016. It resulted in a swing of a couple of hundred votes. Donald Trump currently trails Joe Biden by roughly 20,000 votes.

Former Governor Scott Walker referred to the difference as a “high hurdle” on Twitter. Nonetheless, the Republicans encourage the recount process.

“I don’t think it should be a political thing to make sure election integrity is at the centerpiece of this recount,” Kleefisch said. “A democratic republic is dependent on fair and impartial elections being executed on Election Day. When there are questions about that, even though we have amazing clerks in the state and poll workers who work intensely hard to assure fair and impartial elections, when those questions lie in Milwaukee and Dane counties, I think it is strategic to choose those two.”

In Dane County, Governor Tony Evers sat in the Capitol Wednesday to answer questions about COVID-19. He has growing concerns about putting people at risk during the recount by bringing in hundreds of volunteers, observers, lawyers and media members into the rooms they are conducting the recounts in. However, he knows it has to be done.

“Democracy needs to move forward in this country and in this state,” Evers said. “We have an obligation to do a recount. Obviously, my opinion is that it’s not going to change the ultimate decision of who won and who lost.”

Kleefisch says this process is imperative for those who voted for President Trump to trust the election results are fair and accurate, even though there have been no credible reports of any wrongdoing in the election process in Wisconsin.

There’s more than meets the eye to the President’s team selecting Dane and Milwaukee Counties. While the two are Democratic strongholds, Republican Strategist Mark Graul says it’s a numbers game.

“I think the volume of votes is what’s important,” Graul said. “If you try to turn a 20,000 vote difference, pick two places there are the most votes that shift potentially. That makes the most sense. The volume of the Democrat votes in those counties are so high.”

The Trump Campaign team saved itself nearly $5 million by selecting only Dane and Milwaukee Counties. It was estimated, a full recount in the state would cost in the area of $7.9 million. The recount in the two largest counties will run about $3 million, which President Trump’s team has prepaid for.

It’s a lot of money for something that, historically, hasn’t made much of a difference in the reported outcome of elections.

In 2011, the recount for the Wisconsin Supreme Court resulted in a 310 vote swing. In 2016, President Trump extended his previously reported lead by 131 votes.

However, if you haven’t heard it enough already, 2020 is an unprecedented year. Nearly two-thirds of the votes cast in Wisconsin were absentee, an all-time record.

“I don’t think it’s likely to change the outcome,” Graul said. “I think most people believe that. But, in an election with this kind of consequence, that was that close with this many voters, there is nothing wrong with going back to make sure everything was right. If it shows that the numbers that were originally reported around Election Day were right, that’s a credit and a testament to our election system in Wisconsin. This will only help confirm that we really do things right here in this state.”